According to the Unified Police Department, the two suspects pictured below are wanted for burglaries in Midvale, Riverton, Taylorsville, Salt Lake City, Murray, South Jordan, Cottonwood Heights and possibly other locations.

Surveillance footage gives crystal clear images of what appear to be two men, carefully and completely covered from head to toe, with gloves, backpacks and pry bars-- one of them yellow.

"Their pants were tucked into their socks," said Red Eye Coffee co-owner Jonathan Ross, who was burglarized by the two suspects a couple of weeks ago.

He said the two busted through the back door early on a Sunday morning.

"They spent about 10 minutes getting all of our payroll, our paychecks, our tips for the employees," he said.

Ten minutes that, for he and the other co-owner, meant $3,000 in losses and damages. He said they both paid that money out-of-pocket.

On top of that, he said, he and his brother had to sleep in the coffee shop for a few days until a company could replace the back door.

It's the story for the 20 or so businesses like Ross' that got burglarized.

"They're bordering on professionals," Unified Police Lieutenant Lex Bell said. "At this point, they are serial burglars."

He said the two usually pick a food establishment or car wash, and most likely case each business beforehand.

"They do, it seems, have a plan when they go in there, and they follow that plan," Bell said.

Lt. Bell said within minutes, the pair will enter and leave each business, after busting open safes and cash drawers.

The burglaries began in July and have continued, usually on weekends between the hours of 2 a.m. and 4 a.m.

The suspects are described as being younger and agile. Lt. Bell said sometimes they ditch their clothes as they leave the area.

The first suspect may be a white male. The suspect has a slim build, longer blond or light brown hair and was seen carrying a yellow pry bar.

The second suspect is a male of an unknown race who has a slim build.

Both suspects are pictured in the video above and the gallery below.

Anyone who recognizes the suspects or who has information about the alleged crime spree is asked to call Unified PD's coordinating detective on the case at 385-468-9311. 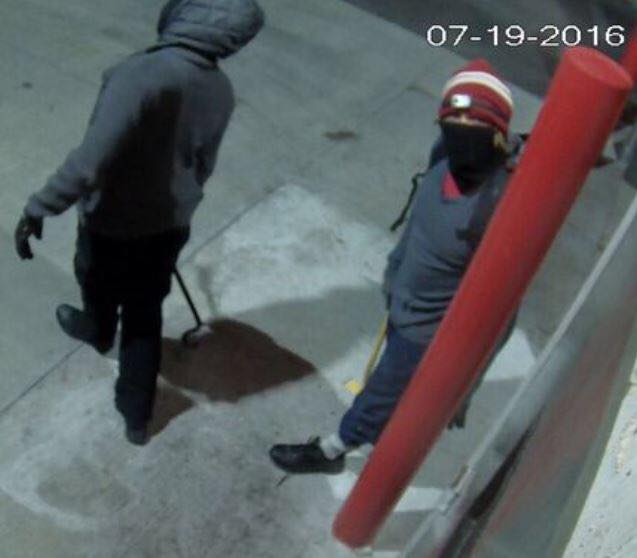