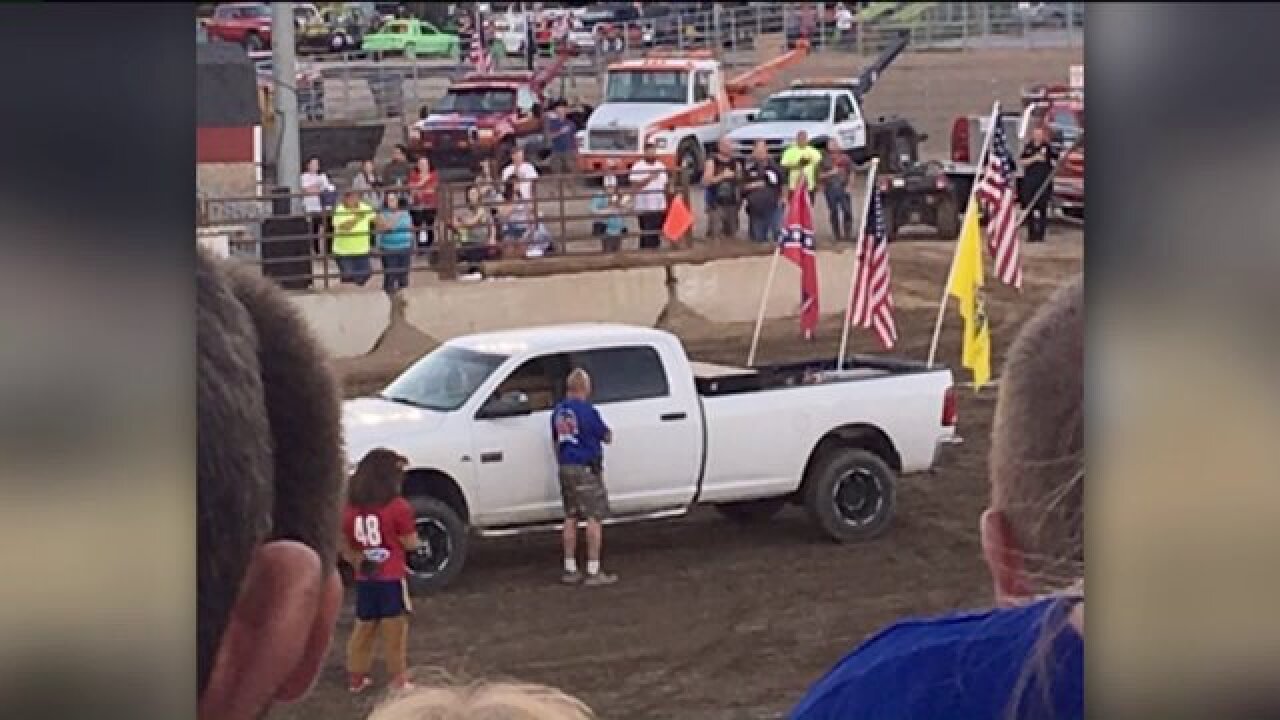 WEST JORDAN, Utah -- Fans at a demolition derby were asked to stand for the national anthem as vehicles bearing American flags formed a procession, but at least one family felt they couldn't participate when they realized a Confederate flag was also being flown.

Images captured Saturday night at the West Jordan Fair Grounds during a demolition derby show the Confederate flag flying from the back of a truck during the national anthem.

That was an issue for the Argueta family.

"When I saw the Confederate flag, I didn’t want to stand because it meant slavery," 10-year-old Jasmine Argueta said.

Lillian, 13, and her sister Jasmine were confused when they saw that flag as part of the display. Their father, Daniel, said he and his family believe in only saluting the American flag. His brother is a police officer and late brother was a Midvale officer.

"You kind of get caught in, yes, you want to stand, you support the US flag," Daniel Argueta said. "You support the troops, you support police officers, but what is the Confederate flag doing there? For anybody that knows history and understands the negative impact of that flag and how it’s been used historically, it’s hard to stand up."

Daniel, his wife and his five children chose to sit through the anthem, even while those around them stood.

"It was humiliating, it was demeaning, because with all the controversy going on with the flag recently and people sitting during the anthem, we had all intended to stand, but we couldn’t," Argueta said. "People probably looked around, probably wondering what we were doing."

The family says they respect a person's right to fly the Confederate flag, however, they take issue with being asked to salute it as part of a patriotic event.

"I understand it’s their freedom to fly it, I respect that, but to be asked to stand up and salute it in representation of our troops, our soldiers, our police officers and our country: That’s not proper," Argueta said.

Daniel and his family contacted West Jordan City, which sponsored the event. Brian Clegg, Parks and Recreation Director, said the Confederate flag was not approved to be a part of the event.

"I was surprised, but, again, when we approached the contractor he removed it," Clegg said. "We apologize that we upset some of the patrons."

"The City contracts with Stirrin’ Dirt to produce the Demolition Derby. Apparently one of the drivers added a Confederate flag to the back of a truck that went into the arena for the National Anthem. As soon as city staff saw the flag in the arena, they asked the driver to take it down, which he did, but not before the truck circled the arena. We apologize for the incident and will be talking to the contractor further to determine why the flag was added. We strive to bring family friendly entertainment to the arena and regret that this incident made some patrons feel uncomfortable. We will be discussing steps we can take to make sure it doesn’t happen again."

The Argueta's said they didn't feel comfortable staying for the remainder of the derby, and they said they were disappointed the Confederate flag was flown at a city-sponsored event, especially on the weekend marking the anniversary of 9/11. They said during a time when the country stands together, they felt they had no choice but to sit.