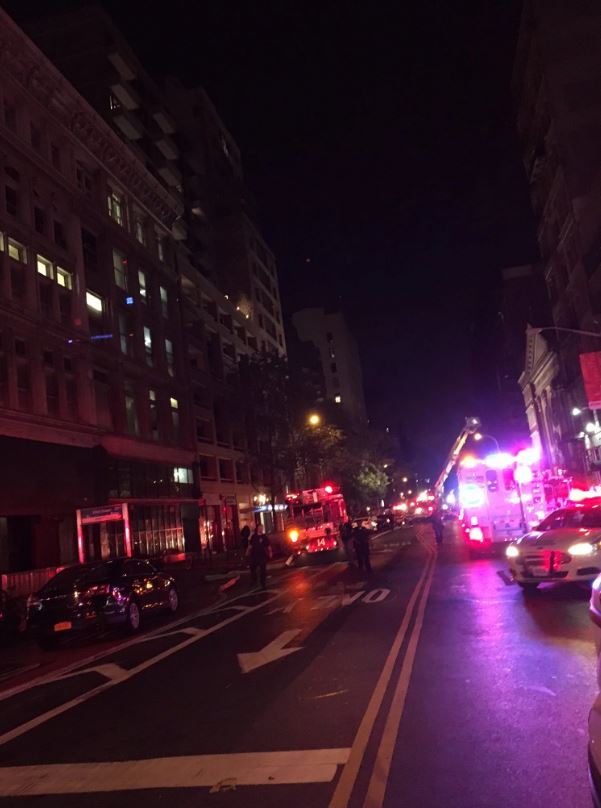 NEW YORK (CNN) — Hours after an explosion injured 29 people in a Manhattan neighborhood, police were scouring the area for evidence Sunday as they tried to pinpoint exactly what — and who — caused the blast.

“A bomb exploding in New York is obviously an act of terrorism,” Gov. Andrew Cuomo told reporters Sunday, vowing that authorities will catch whoever is responsible.

“A bomb going off is generically a terrorist activity. That’s how we’ll consider it. And that’s how we will prosecute it,” he said.

Cuomo cautioned that the investigation remains in its early stages and added that no terror group had taken responsibility for the explosion.

In light of the blast, he said 1,000 additional New York State Police officers and National Guard troops will be deployed to patrol bus terminals, airports and subway stations.

The stepped-up security is “just to err on the side of caution,” Cuomo said. “I want New Yorkers to be confident when they go back to work on Monday that New York is up and running and we’re doing everything that we need to do.”

New York City Mayor Bill de Blasio called the explosion Saturday night “an intentional act.” But he told reporters there was no evidence tying it to known terrorism groups.

“There’s no specific and credible threat against New York City at this time from any terror organization,” he said.

Authorities believe the blast was caused by an explosive device in or near a dumpster, a law enforcement source told CNN.

The explosion occurred at 23rd Street and 6th Avenue. A few blocks away, investigators found one possible clue: a pressure cooker, with dark-colored wiring protruding, connected by silver duct tape to what appears to be a cellphone, officials said.

Authorities haven’t yet revealed whether they believe that suspicious device has any connection to the blast.

Investigators are also combing through surveillance video for clues, but so far they haven’t found anything pointing to a suspect, a senior law enforcement official said. Some of the video is not helpful because the cameras are either too far away or the footage is too grainy to tell what’s on it, the official said. Investigators will be canvasing for additional video Sunday.

“We will find whoever did this or whatever group did this and they will be brought to justice, period,” Cuomo said. “We will not allow these type of people and these type of threats to disrupt our life in New York. That’s what they want to do. We are not going to let them do it. This is freedom. This is democracy, and we’re not going to allow them to take that from us.”

Authorities have cordoned off the street where the explosion occurred. A small crowd watched from behind the police tape Sunday morning as investigators gathered at the blast site. Some onlookers said residents who live on the block still hadn’t been allowed to return to their homes.

Police officers and federal agents searched the streets with flashlights, robots and dogs early Sunday to ensure there were no other devices in the area.

Multiple local and federal law enforcement officials described the pressure cooker found at 27th Street. None of them would say what was inside the cooker, which has since been removed from the scene.

A piece of paper with writing on it was found nearby, the officials said.

Search attention also focused on another object in the area, but it turned out to be trash.

De Blasio said investigators believe there is no connection to an earlier incident in New Jersey, where an explosion went off in a garbage can on the route of a Marine Corps charity run Saturday.

“We really were lucky that there were no fatalities,” he said.

By Sunday morning, all 29 injured victims had been released from hospitals, the governor said.

Investigators are still waiting for the results of forensics tests to reveal more details about the New York explosion, the senior law enforcement official said.

CNN law enforcement analyst Tom Fuentes said the information authorities have revealed so far about the blast leads him to a troubling conclusion.

“It tells me that it was a rather large explosive device that someone built and someone detonated and caused the injury of dozens of people. … It shows me it’s a deliberate act and indicates an act of terrorism,” he said. “Whether it’s domestic terrorism or international, we don’t know, but it certainly would have an appearance that somebody made an attempt to kill people, on purpose.”

But CNN national security analyst Juliette Kayyem said it’s too soon to label the blast a terror attack without knowing the motivations behind the explosion. Terrorism, she said, generally has political or religious motives behind it.

“I think it’s premature to call it terrorism until we know — unless you want to define terrorism as any violent act in an urban area — but given that there’s no proof of motivation, you wouldn’t be able to bring a terrorism case, so to speak, today,” she said. ‘You certainly would be able to bring other types of cases if you found the culprit.”

‘I could feel it in my chest’

Nearby resident Sam Smith, 50, said he was closing the shades of his apartment when the blast hit.

“All I saw was a big light, and then I heard the explosion,” he told CNN as he watched investigators and waited for word about whether he could return home Sunday morning. “I could feel it in my chest. It took me an hour and a half before I could hear again.”

Danilo Gabrielli, 50, was watching TV at his 23rd Street apartment about a block away from the explosion site when he heard the blast. He rushed to see what had happened and found a chaotic scene.

“We smelled something, like an intense sulfur smell, and saw smoke coming out of this building. I saw pieces of metal — not large, but not small either. A few friends of mine saw glass there.”

“It’s a real quiet neighborhood — not like the center of the city or the Wall Street area. It’s tiny bars, where you go to grab a drink, grab a bite to eat, watch a film. We were worried.”

Surveillance video shows windows shattered with terrified people running on the streets and ducking. The video, which shows angles from inside and outside Orangetheory Fitness in Chelsea, shows a screen laying outside on the street after the explosion and what appears to be papers flying in the air.

Some social media users said the sound of the explosion was heard as far away as Hoboken, New Jersey, across the Hudson River.

‘I just blacked out’

Twenty-nine people were injured in the New York explosion, one of them critically, officials say.

Among the injured were David Martinez and Brenda Abero, who spoke to CNN after they were discharged from New York’s Bellevue Hospital. Both said they were lucky to be alive.

Martinez said the couple were driving through Chelsea when their car was lifted up by the force of the blast, damaging the left side of the vehicle.

“I was driving a car and next thing you know I felt an explosion,” he said.

“I just blacked out, next thing I know I’m in an ambulance.”

Abero, who is pregnant, said her baby was uninjured.

Martinez, who suffered injuries to his head and leg, was feeling “pain, a little traumatized,” he said. “Thought I was close to not seeing my son again, that was the scariest part.”