SANDY, Utah - A couple of large sinkholes popped up on a busy road in Sandy Thursday afternoon after some water lines broke.

The ground gave away along 114th South between 900 and 1000 East after two water line breaks.

"Water is extremely powerful, and when you have that size of line running full flow, it's a lot of energy," said Scott Ellis of Sandy Public Works.

Traffic in all directions had to be stopped for several hours until the city determined it was safe for traffic to resume. The roads are now reopened but are limited to one lane as crews work to repair the water lines and then reconstruct the road. It could be a week before everything is back to normal.

According to the city, hundreds of tons of Asphalt crumbled apart. The sink holes were between eight and ten feet deep and were wide enough to fit two cars in.

"A little scary, it gets you stressed out a little bit," Sandy resident Nick Sommer said.

Sommer travels the stretch of road every day. He can't imagine if a car would have been driving by when the earth gave way.

"You wouldn't have any time to get out of the way, you would just be down in a hole," Sommer said.

The streets became rivers as water gushed down into people's yards, surrounding parked cars in mud.

"Water went up to my ankles, got all muddy on the bottom of my pants," said Sandy resident Tiffany Ivie.

Ivie's family had to move all their belongings out of the garage as flood waters seeped under the door.

"It could have gotten in my house, we could have been trying to find a place to stay tonight," Ivie said.

The city had to turn several water lines off, leaving thousands of residents dry for hours. When it was turned back on there were some side effects.

"The water was a little bit slightly tinged brown and stuff, and I was kind of like, 'Oh,' but I figured it was residual trying to get out of the pipes and stuff like that," said Sandy resident Sonya Barquist.

No injuries were reported. The city of Sandy is still investigating the cause of these water line breaks. 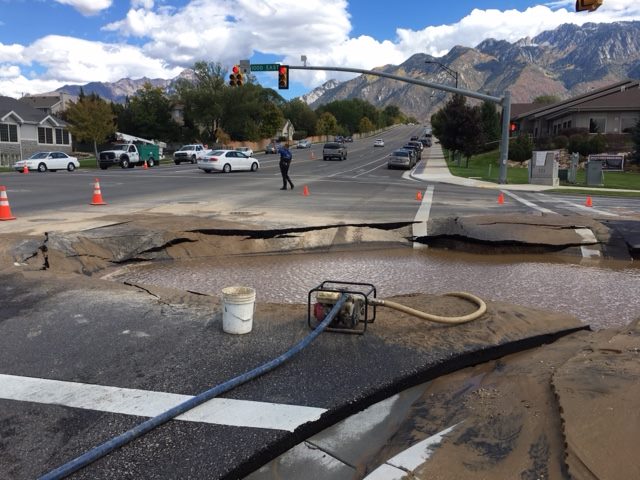