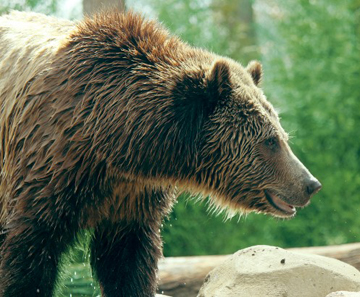 SWEETWATER COUNTY, Wyo. — Wyoming authorities are encouraging hunters in Sweetwater County to be “bear aware” as they venture north into grizzly country.

The warning comes in light of two bear attacks over the weekend — one in Wyoming northwest of Dubois and the other in southwestern Montana.

Todd Orr was attacked in Madison County, Montana on Oct. 1. He posted the aftermath of the attack on Facebook just before he went to the hospital. His message to viewers was “bear spray doesn’t always work, but it’s better than nothing.”

On Oct. 2, an elk hunter was injured by a female grizzly bear with two older cubs, according to a FOX News story. He was taken to a hospital with serious injuries to his face and leg.

Sweetwater County Sheriff Mike Lowell said many county residents hunt in areas within the Greater Yellowstone Ecosystem, where grizzly bears are known to frequent, according to the Wyoming Game and Fish Department. Officials estimate the grizzly population in that spot to be about 600.

“Hunters in bear country can be particularly vulnerable to bear encounters, as they are moving quietly, are often moving during dawn and dusk hours, and use game calls,” according to a press release from the Sweetwater County Sheriff’s Office.

Authorities list a variety tips to lessen the chance of dangerous human-bear encounters in grizzly country:

-Hunt with a partner

-Always remain alert to the presence of bears

-Carry and know how to use bear spray. Carry it where it is quickly accessible, not in a pack

-Learn to recognize bear signs such as tracks and scat

Information on grizzly bears, grizzly bear management and staying safe in bear country can be found at the Wyoming Game and Fish Department at: http://wgfd.wyo.gov/web2011/wildlife-1000674.aspx

Learn how to use bear spray and other defensive tactics, including firearms on the United States Geological Survey website: http://pubs.usgs.gov/fs/2009/3018/pdf/FS09-3018.pdf