SALT LAKE COUNTY, Utah — Police detectives and agents with the Bureau of Alcohol, Tobacco, Firearms and Explosives are investigating a pair of burglaries that may be related.

According to a news release from the West Jordan Police Department, the suspects took nine guns, including two machine guns, from Flawless Firearms around 7 a.m. on November 5.

The suspects in both cases wore similar clothing: hooded sweatshirts and either bandannas or masks shrouding their faces. In the R&R BBQ robbery, one suspect wore a wolf head mask.

"That wolf mask is pretty unique for this area. I know it was near Halloween, so there may have been a few of them around. But someone may, with addition to the other suspects and what else they were wearing, someone may know them," said Sgt. Sam Winkler, South Jordan Police Department. "And, if they are the same ones related to the West Jordan case, they could be very heavily armed and very dangerous. So we would encourage anyone to call 9-1-1 or the local police department immediately."

Anyone with information that may help police and federal investigators identify the suspects is urged to call 1-800-ATF-GUNS (1-800-283-4867) or the West Jordan Police Department at 801-840-4000. Together, the two agencies are offering up to a $10,000 reward leading to the arrest and conviction of the suspects responsible for the Flawless Firearms burglary. 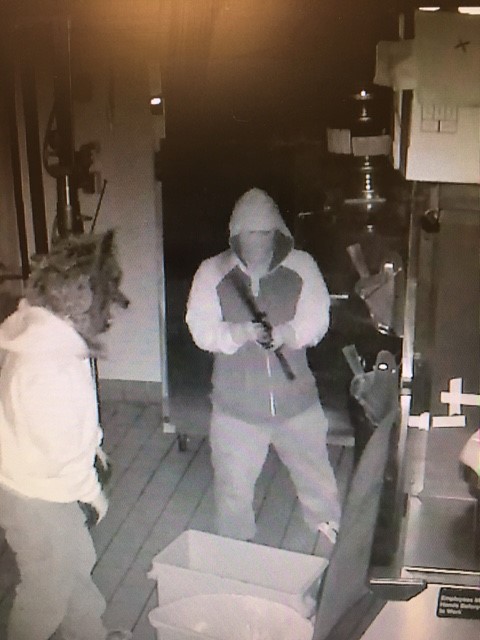