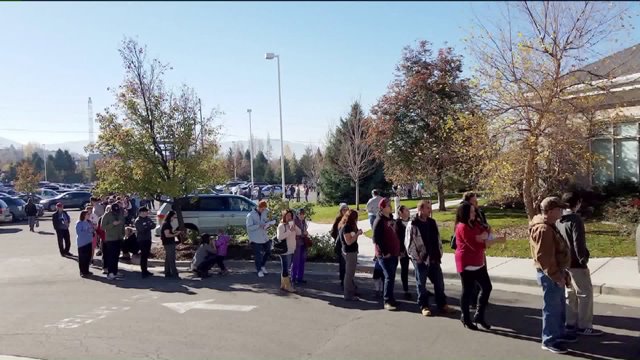 SALT LAKE CITY -- State election leaders and county clerks are assessing the 2016 election, looking at what went right and what went wrong.

At a meeting in St. George on Friday, the Lt. Governor said the tremendous turnout and slow counting of ballots were concerns shared among many county clerks.

"We had the overwhelming turnout that far exceeded our expectations," he said in an interview with FOX 13. "The second part really has to do with the late deciders. It's different than any other election I've been a part of. People waited until the last minute to make up their minds."

Swensen said about 55,000 people turned out to vote in person. Some waited as much as four hours in line to vote. Swensen told FOX 13 she should have had more than 37 polling places.

"Obviously now, I realize it was not enough," she said. "I think there was another issue: I think the issue was that people still did not get the message that this was a vote-by-mail election."

Swensen said she heard from many voters who thought it was junk mail, a sample ballot or didn't realize that was their official ballot. She said she was legally prohibited from opening additional polling spots last minute because of the bond elections.

"I was absolutely devastated to find that people were waiting in line. I felt so helpless," Swensen said.

She added that she heard from many voters who insisted on voting in person on Election Day, responding to President-elect Donald Trump's claims that the election would be "rigged."

Cox said the rush of last-minute voter registrations also overwhelmed clerks statewide. There were about 50,000 people who registered to vote on the deadline, making a total of 80,000 in the last week leading up to the deadline.

"We found some choke points we weren't expecting," he said. "All of that led to where we are today."

Going forward, Cox said he believed some changes would be made to the election system.

"Vote-by-mail is likely here to stay," he said, saying the vast majority of people reported positive experiences with it. "Electronic voting machines are too expensive."

Cox has been a proponent of the vote-by-mail, believing it leads to a "smarter voter." He said it gives voters the freedom to research the issues and candidates.

But if you still like the "I Voted" sticker that seems to bring people out to the polls, Swensen said it was doubtful it would be included in future mail-in ballot kits. The vendor who puts them together wanted to charge $1 per sticker to include it in the packet, leading to an additional cost of $500,000 to taxpayers.