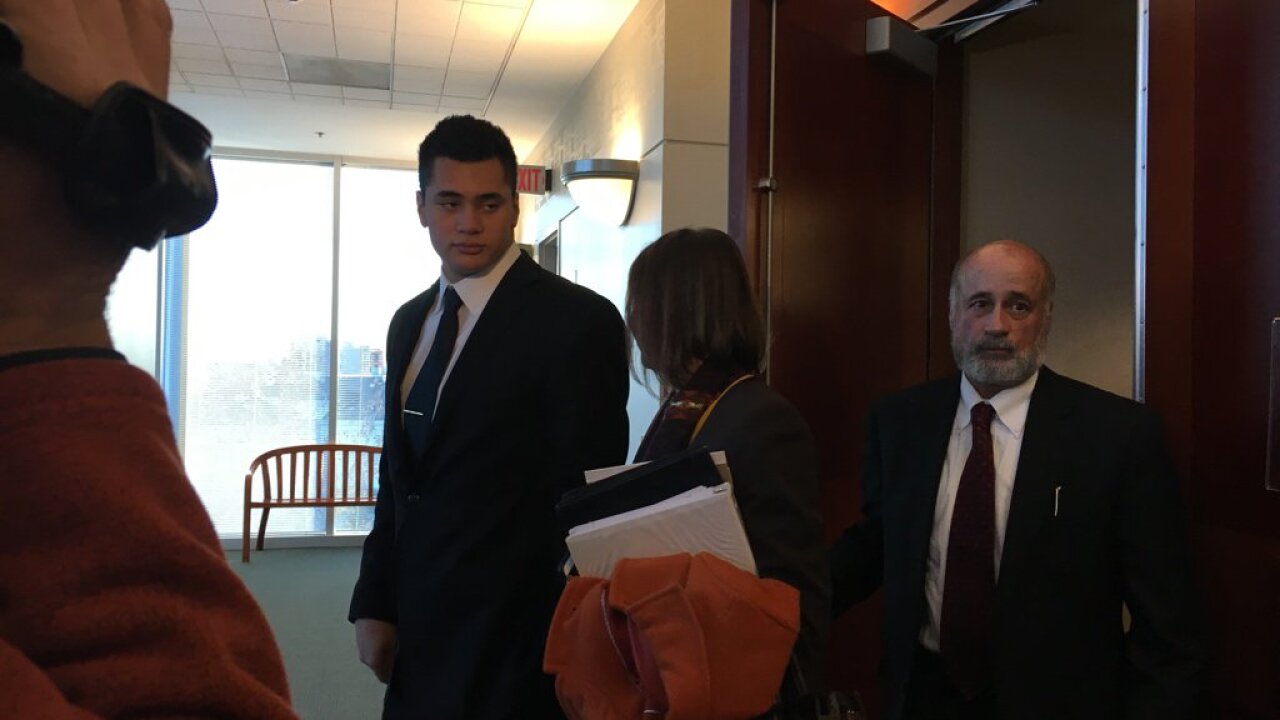 Osa Masina, 19, was bound over for trial Monday after a preliminary hearing where his accuser testified against him. The 19-year-old woman told the judge she visited Masina at the University of Southern California earlier this year, where he was on the football team (he previously played for Brighton High School).

The alleged victim testified she stayed in Masina's dorm room. She said they had one consensual sexual encounter, but later after a night of drinking and taking drugs, she passed out and awoke to find Masina and a teammate having sex with her.  The next day, she confronted him, she said in court.

"I asked him why it happened, how it even got to that point? I didn't want it to happen. He said, 'No, you said you wanted it. It was your idea. You said yes,'" the woman said.

The woman testified she next encountered Masina on July 24, when he sent her a message on Snapchat inviting her to a party in Cottonwood Heights. She told the judge she drank and ate part of a cookie laced with marijuana, and became so inebriated that she passed out. She testified she awakened to find Masina sexually assaulting her, passed out and awoke to him sexually assaulting her again.

"I couldn't breathe and I was scared," she said. "Just trying to tell myself to keep breathing was all I could do."

The woman said she remembered waking up with a blanket over her and only her bra on. She left the house and passed out on a lawn, then went back into the house and called for a ride.

Throughout her calm and sometimes stoic testimony, the woman repeatedly insisted she did not give consent. At times, Masina appeared to close his eyes as the woman testified.

Judge Keith Kelly questioned if there was evidence to substantiate the rape charge, but ultimately ruled that Masina should face trial for it and a pair of forcible sodomy charges. All of the charges carry a potential sentence of up to life in prison, if he is convicted.

Masina refused to comment to reporters as he walked out of the courtroom on Monday. He will formally enter a plea to the charges on Friday morning. His attorney, Rebecca Hyde Skordas, said they were considering challenging the decision after the prosecution rested its case, then asked to re-open it to hear from a police detective.

"We can file what's called a motion to quash the bindover," she told FOX 13. "Again the burden of proof is very, very low at a preliminary hearing. It's probable cause, it's about the lowest burden of proof we have in the law."

A Cottonwood Heights police detective testified Masina was questioned and insisted any sexual encounters were consensual.

A lawyer for the alleged victim originally pushed to have the courtroom closed during her testimony, citing her desire for privacy. Judge Kelly ordered the hearing kept open after an attorney for news media organizations (including FOX 13) argued against it.

Masina is currently fighting a suspension by the University of Southern California football team over the sex assault accusations.