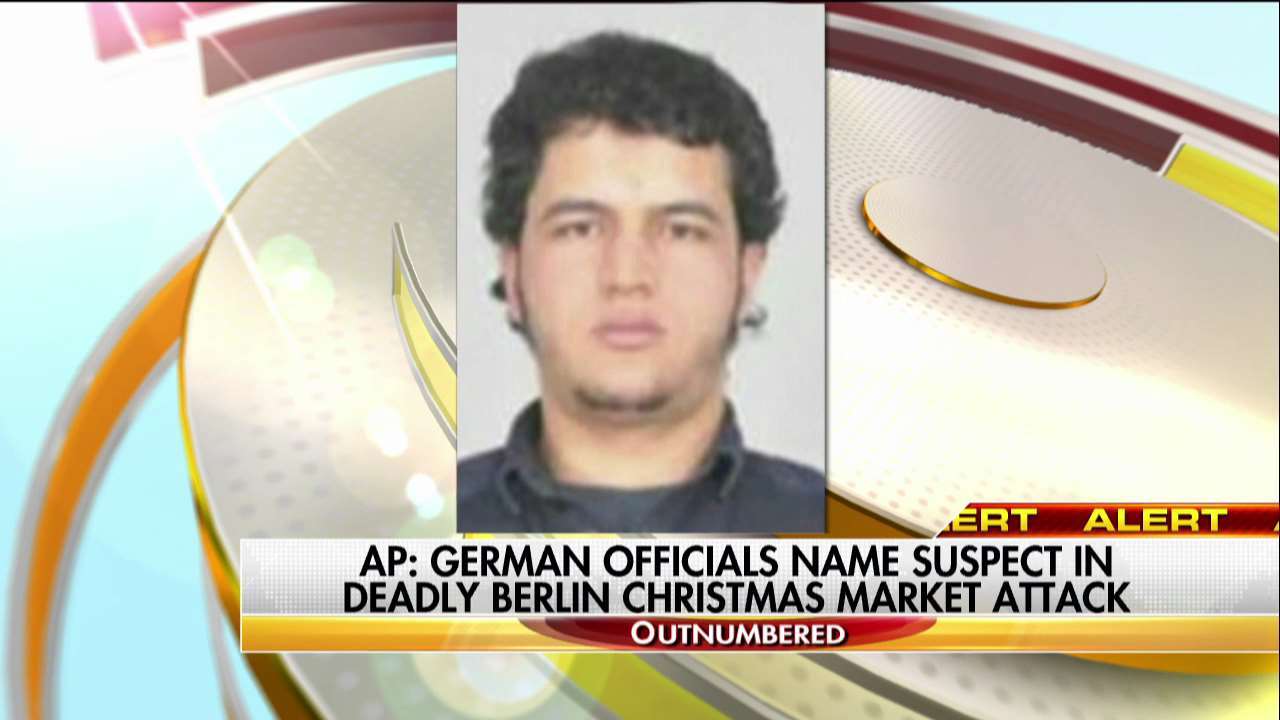 BERLIN – The German federal prosecutor’s office on Wednesday issued a wanted notice for Anis Amri, a 24-year-old man born in Tunisia, in connection with Monday’s attack on the Christmas market at Breitsheidplatz in Berlin, according to a statement.

Police have offered a reward of up to 100,000 euros. They say he is “under urgent suspicion.”

The wanted notice asks the public for its help in the manhunt and warns that Amri could be “violent and armed.”

The notice encourages members of the public to come forward with any information on the current or past whereabouts of Amri.

“If you see this person that we are seeking, inform the police. Please do not put yourself in danger because this person could be violent and armed!” the notice said.

Police are searching for a Tunisian man in his early 20s in connection with the Berlin Christmas market attack, German officials said Wednesday, as questions were raised about his possible ties to Islamist extremism.

The suspect’s identity papers were found inside the cabin of the truck used in Monday’s attack, which left 12 people dead and 48 injured, German security officials said. The man was born in 1992, one said.

Ralf Jaeger, interior minister of North Rhine-Westphalia, told reporters the suspect was known to German security services as someone in contact with radical Islamist groups, and had been assessed as posing a risk.

One German security official told CNN the suspect had been arrested with forged documents in the southern German town of Friedrichshafen in August, on his way to Italy, but a judge released him. The suspect also came onto the radar of German police because he was looking for a gun, the official said.

• Market attack suspect was known to be in touch with radical Islamist groups, a state minister says. • The suspect’s asylum request was refused, and deportation was attempted, a German state minister says. • German police conduct raids in North Rhine-Westphalia region, a security official says. • Mourners leave tributes of flowers and candles at makeshift shrines to the victims.

German Interior Minister Thomas de Maizière confirmed that a new suspect was being sought in connection with the attack but declined to confirm his identity. He told reporters a manhunt for the suspect had been underway in Germany and across Europe since midnight.

German police carried out raids Wednesday in connection with the investigation in North Rhine-Westphalia, where the Tunisian suspect had stayed, another security official told CNN. The official said the suspect was not yet in custody.

ISIS claimed it had inspired Monday’s attack. The terror group’s affiliated Amaq News Agency described the perpetrator as a “soldier of the Islamic State” who had acted in response to calls for attacks in the West.

Stephan Mayer, a spokesman for the Christian Democratic Union/Christian Social Union parliamentary group, told a news conference that the suspect was thought to be a Tunisian national but his age was in doubt as he used different identities.

He also acknowledged the suspect had been registered by German authorities as someone who posed a risk and his asylum request had been refused.

Mayer said authorities’ attempts to deport the Tunisian national were thwarted because they were unable to establish his identity beyond doubt. He said the suspect was believed to have links to a Salafist group, referring to an ultra-conservative branch of Islam.

Jaeger said the suspect was believed to have entered Germany in July 2015 and had traveled between Berlin, North Rhine-Westphalia and other cities. He was “very mobile” but was mostly in Berlin since February, he said.

The Tunisian authorities were informed when the deportation process started in North Rhine-Westphalia, Jaeger added. The man’s asylum request was refused in June.

German security officials told CNN that investigators believe the Tunisian suspect is linked to a recruitment network for ISIS operating in Germany.

The main figure in the network, Ahmad Abdulaziz Abdullah — a 32-year-old Iraqi national also known as Abu Walaa — and four others were arrested and charged with terrorism offenses in November.

German federal prosecutors said then that Abdullah was the ringleader of a multiregional recruitment network. The group allegedly targeted and radicalized young Muslims in North Rhine-Westphalia and Lower Saxony.

Jaeger said he could not confirm a link to Abu Walaa.

Police have appealed to the public for any digital videos and photos they have of the attack or possible suspects. They tweeted Tuesday they were investigating 508 leads.

On Tuesday evening, police released an asylum-seeker believed to be from Pakistan who had been detained in the immediate aftermath of the truck attack. According to German media, witnesses had said he had been driving the truck.

But Peter Frank, general prosecutor at Germany’s Federal Court of Justice, said that forensic tests offered no link between the man and the truck’s cabin.

A Polish man found shot dead inside the truck has been identified as its original driver, according to German media.

He was not driving during the incident, police said. The gun used to kill him has not yet been recovered.

The slain driver may have been involved in a struggle with the suspect inside the truck’s cabin before he was shot, Cruickshank said. This could be when the suspect’s identity papers were dropped, he suggested.

The truck, which was owned by a Polish company, was hauling 25 tons of steel before it was steered into the crowd, according to its owner, Ariel Zurawski. He identified the slain driver as his cousin.

German authorities have not publicly named any of the victims, and police have asked people not to post videos or photos of them as a sign of respect.

But Italy’s Foreign Ministry said Wednesday that Italian national Fabrizia Di Lorenzo was missing following the attack and that her family was now in Berlin. The ministry said it was waiting for German investigators to complete their work before issuing a statement.

Italy’s ANSA news agency reported the missing woman, 31, worked in Berlin and that her cell phone was found at the attack scene.

German President Joachim Gauck visited some of the injured Wednesday at the Charité hospital in Berlin.

He told reporters his visit was intended “to give support for the injured people, to show them the whole nation is supporting them.”

The doctor who oversaw the Charité hospital’s emergency response, Michael Schuetz, told CNN that survivors brought there had described a scene “like a little war zone.”

“This is a very traumatic, very traumatic event for them,” he said. Physical injuries ranged from major trauma for those hit by the truck to lesser injuries suffered when poles from the market huts fell on people, he said.

Despite the manhunt, Berlin appeared much quieter Wednesday than was the case in Paris and Brussels, Belgium, in the aftermath of recent terror attacks there, when the noise of helicopters and sirens filled the streets for days.

Berliners who came to leave flowers and candles at makeshift shrines near the Christmas market told CNN they would not allow the attack to change the way they led their lives.

One handwritten note left with a bunch of roses read, “You will not have our hate,” echoing the words of writer Antoine Leiris after he lost his wife in the Paris attacks.

Dozens of people raised their voices in a tribute to those killed, singing songs such as “We Are the World and “Shine a Light.”