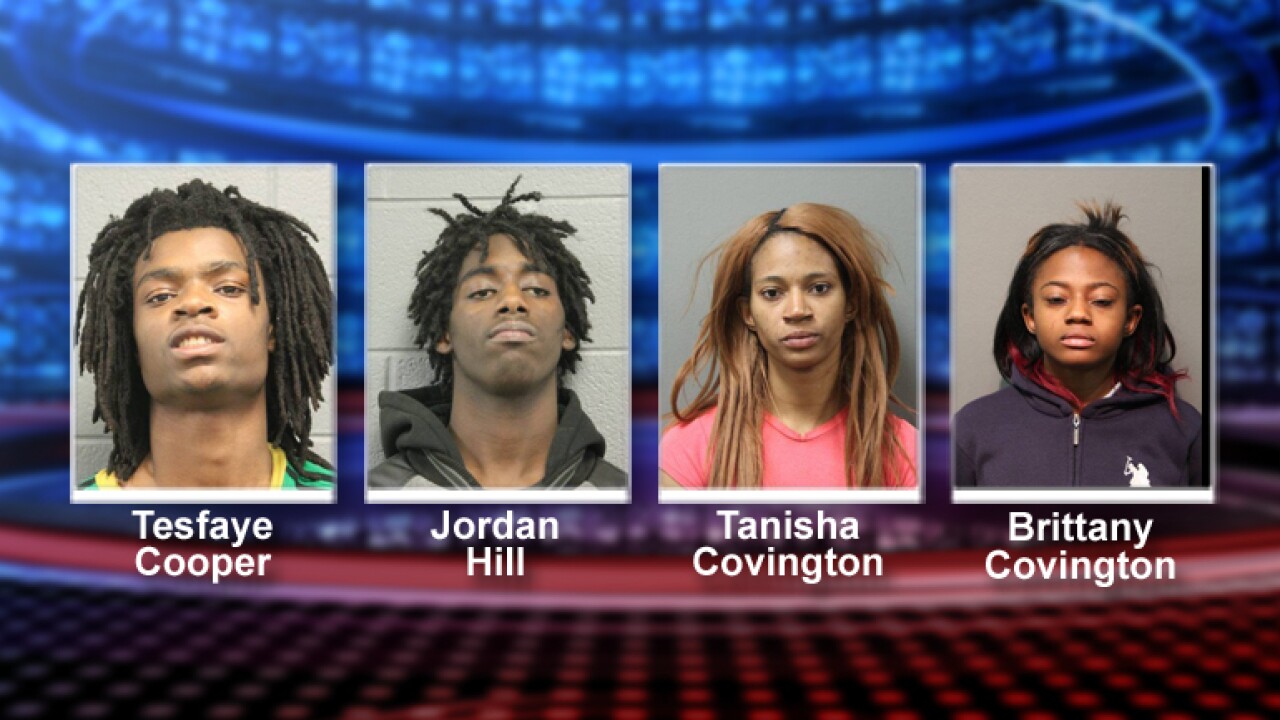 The suspects face hate crime, kidnapping, unlawful restraint and battery charges in their alleged role in the attack.

“I’m wondering where was the sense of decency that each of you should have had?” Cook County Judge Maria Kuriakos Ciesil asked the suspects. “When the mom reached out asking about his child … Where was it? I don’t see it.”

The decision to deny them bail brought cheers in the courtroom.

After the hearing, Assistant State’s Attorney Erin Antonetti told reporters the 18-year-old victim suffers from schizophrenia and attention-deficit hyperactivity disorder. He was friends with one of the suspects, Jordan Hill, and was voluntarily spending time with him, starting on New Year’s Eve, she said.

The attacks started in the back of a stolen van after Hill apparently became angry because the victim’s mother called and asked about her son’s location, Antonetti said.

Hill took the teen to a third-floor apartment in Chicago, where he was bound and gagged, beaten over several days by the two male and two female suspects and forced to drink toilet water, with some of the attacks broadcast on Facebook Live, she said.

“During the course of the attack, defendant Hill communicated with the victim’s mother and demanded $300 ransom in exchange for getting her son back,” Antonetti said.

The youth finally escaped Tuesday when police came to the apartment because the suspects argued with second-floor residents who’d complained about the noise, she said. The victim was treated at a hospital and released.

Jordan Hill, 18; Tesfaye Cooper; 18; Brittany Covington, 18; and Tanishia Covington, 24, have each been charged with a hate crime, felony aggravated kidnapping, aggravated unlawful restraint and aggravated battery with a deadly weapon.

Hill lives with his grandmother and six siblings, ages 14 to 20, and played football in high school, the public defenders said. He’d spent time in jail in for prior convictions, the defenders said.

Cooper lives with his mother and six siblings, has a paralyzed brother and had been arrested previously for possession of a controlled substance, the public defenders said.

Video of the attack shows the victim cowering in a corner of a room, tied up with his mouth bound in plastic. An assailant slashes his sweatshirt with a knife. A woman streaming the abuse on Facebook Live repeatedly turns the camera back to herself. An attacker then takes a knife to the victim’s head, carving a patch off his scalp.

For the next 25 minutes, the abuse continues for the world to see. The victim is repeatedly kicked and punched, but his screams are apparently ignored.

Antonetti , the prosecutor, said the victim was forced to yell “I love black people” and “*F*ck Donald Trump!”

Police said the department pursued a hate crime charge because of the victim’s diminished mental capacity, the fact that the four suspects tied him up and the racial epithets heard on the video. The victim is white; the suspects are African-American.

Although there is no evidence to support the claim, the far-right quickly pointed the finger at the Black Lives Matter movement as the video spread on social media. Within 24 hours, the hashtag #BLMKidnapping was mentioned more than 480,000 times on Twitter.

Police have said there’s no connection between the activist group and the horrific video.

Neither the Black Lives Matter national organization nor its Chicago chapter responded to CNN’s requests for comment Thursday.

DeRay Mckesson, a prominent Black Lives Matter supporter, said those linking the attack to the movement don’t have their facts straight.

“It goes without saying that the actions being branded by the far-right as the ‘BLM Kidnapping’ have nothing to do w/ the movement,” he tweeted.

A former Chicago police officer, Dimitri Roberts, slammed the notion that the Black Lives Matter movement is to blame.

“This is hate. And hate doesn’t have a color,” Roberts said. “So for folks to talk about this is somehow connected to Black Lives Matter is absolutely the wrong way to look at this. … And we cannot respond to hate with hate. It’s just going to perpetuate the cycle.”

How the encounter began

The victim’s parents dropped him off at a McDonald’s in the Chicago suburb of Schaumburg on Saturday, December 31, to meet a friend.

Antonetti said the teen called home on Saturday and asked to spend the night with the friend and asked the same thing on January 1. On January 2, he stopped communicating with home, Antonetti said.

That same day, the teen’s brother got on Facebook and determined Hill was the friend the victim was with, Antonetti said.

Antonetti said Hill stole a van December 31 and drove around in it with the victim, plus other people. Hill took the youth to the apartment in Chicago, where he was held captive and abused, Antonitti said.

By Monday, his parents had reported him missing, and they began getting text messages from someone claiming to be holding him captive, police said.

While the suspects were arguing with neighbors, the victim ran out of the apartment and police found him on the street wearing an inside-out tank top, shorts and sandals on a cold winter day, police said.

“He was bloodied, he was battered,” Officer Michael Donnelly said. “He was very discombobulated.”

While investigating the text messages sent to the victim’s parents, police discovered the Facebook video.

After viewing the video, investigators determined the victim was the teen found on the street — and that the people arrested were involved, police said.