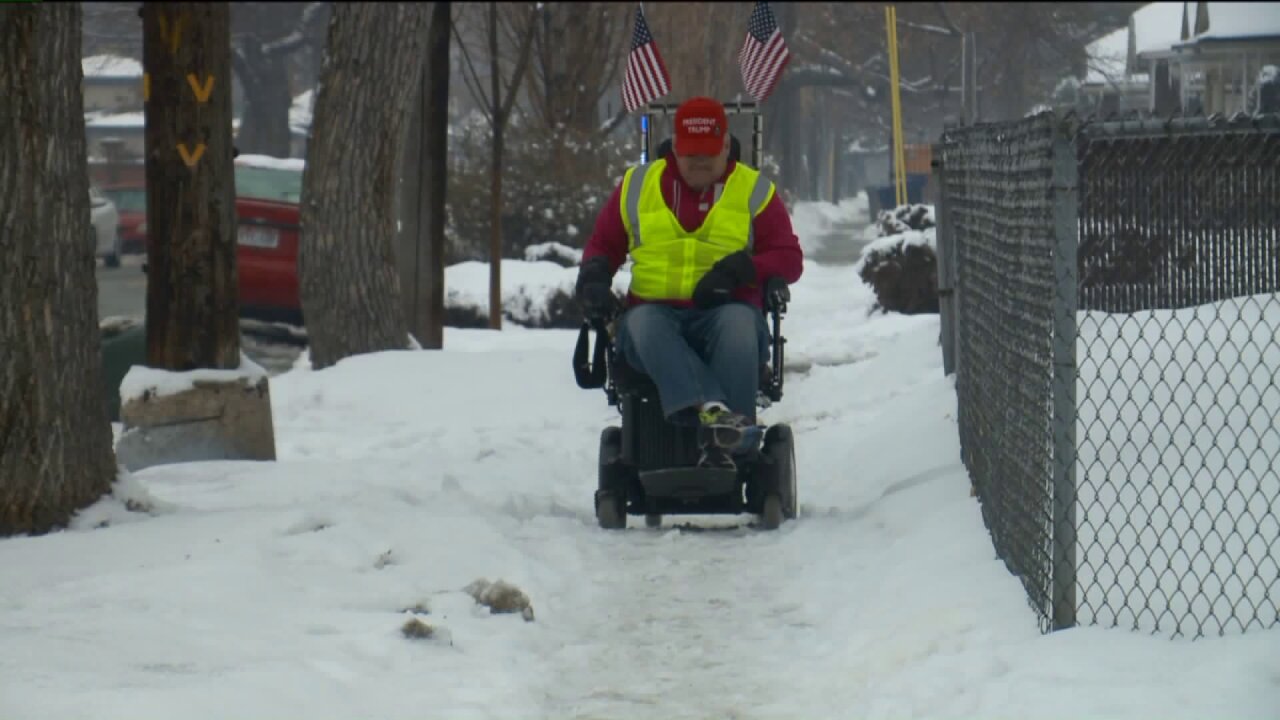 Darrell Boldt drove his wheelchair down the street, as cars whizzed by him on Sunday afternoon.

He wore a bright-colored safety vest and his wheelchair featured flashing lights to warn traffic. Still, it’s not an ideal situation.

“Not all residents or businesses take good care of their sidewalks,” he said, as to why he chose to drive in the thick of traffic.

When those un-shoveled sidewalks sit stagnant, covered with snow, for Boldt it means the risk of sliding or getting stuck.

“People have gotten out of their cars and come to help,” he said. “I've been rescued a couple times.”

That’s why he usually opts for the road.

“Just go out in the street, take my chances,” he said.

Boldt posted a YouTube video on Sunday, to show his daily commute to from the nearby TRAX station on 2100 South to his home.

“So here I am going down 21st,” you can hear him say in the video, as he drives his wheelchair against traffic on the busy street.

“Can't get across this. So where am I? I'm still in the road,” he says, showing off snow-covered pavement.

At another point you hear him say, “Here comes a car behind me,” as an SUV closely drives by him.

“I can't get up there on the sidewalk, sidewalk's not done there,” he later says, showing terrain too tough for his wheelchair to navigate.

“This is what it's like for me,” he says in the video. “This is the life in a wheelchair.”

A life not many understand, and a life people might not think about when they don’t shovel.

Down the street, Rocky Jackson had just finished shoveling his mother-in-law’s sidewalk Sunday evening. He said he wanted to clear space for his pregnant wife to walk on safely.

Jackson recently witnessed a situation like Boldt’s: a person in a wheelchair having a difficult time in the snow. But this person had someone else with them.

“They were carrying around a snow shovel, shoveling in front of the person [in the wheelchair],” he said. “It looked like a nightmare.”

He understood the importance of keeping the sidewalks clear. Plus, his mother-in-law also didn’t want to face a fine for leaving the snow around.

“You have violations and tickets if you don't shovel within a certain amount of time,” he said.

According to Salt Lake City ordinances, residents have up to 24 hours after snowfall ends to shovel. If they don’t, the city can slap residents and businesses with fines ranging from $50 to $200 depending on the length of sidewalk and amount of time since the storm.

The threat of a fine might not spur everyone into action, but for Darrell? He hopes a story like his is reason enough.