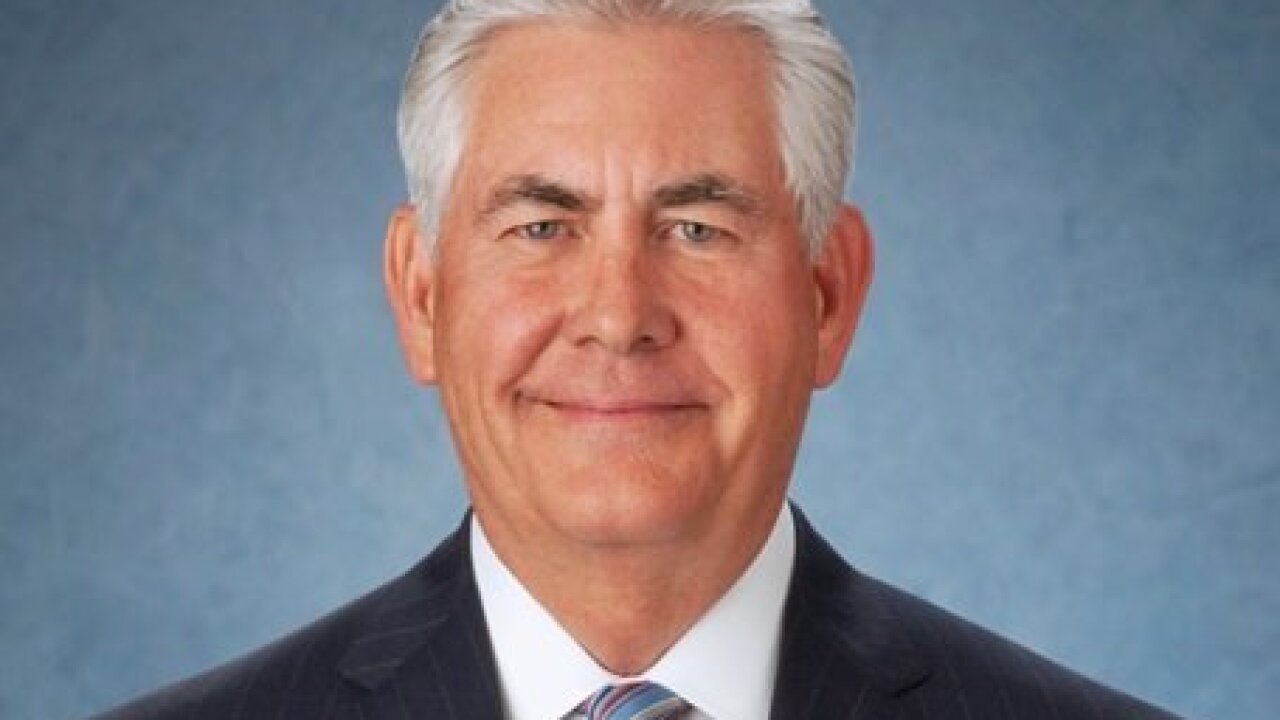 President-elect Donald Trump’s nominee to be the US envoy to the world broke with his future boss on a number of key foreign policy issues on Wednesday, denouncing Russian aggression in cyberspace and in Ukraine, talking up sanctions and affirming his belief in climate change.

Rex Tillerson, a former ExxonMobil CEO, at his Senate Foreign Relations Committee confirmation hearing condemned Russia’s invasion of Ukraine as an “illegal action” — something Trump hasn’t done — and said he even would have sent the country defensive weapons to use against Moscow.

In a striking exchange Tillerson admitted that he’d only spoken to the President-elect about world affairs in general terms, and that they haven’t yet discussed Russian policy, telling the Senate panel “that has not yet occurred.”

Tillerson also praised the usefulness of sanctions as a deterrent — again, a very different view than his boss — although he cautioned that their use can hurt American businesses. “In diplomacy, it is useful to have a stick that is in your hand so that whether you use it or not, it becomes part of that conversation,” Tillerson said.

And Tillerson took steps in his opening remarks to strike an overall tougher line on Moscow than Trump has to date, saying that “Russia must know that we will be accountable to our commitments and those of our allies, and that Russia must be held to account for its actions.”

“Sen. John McCain became aware of the information in December and passed it to FBI Director James Comey that month.”

On climate change, Tillerson told the Senators he believes “the risk of climate change does exist and the consequences of it could be serious enough that actions should be taken.” In contrast, Trump has in the past described climate change as a hoax perpetrated by China to hurt US manufacturers, although he recently acknowledged the possibility that human activity could be a contributing factor.

The Secretary of State nominee admitted that “ultimately the President-elect was elected and I’ll carry out his policies in order to be as successful as possible but I think it is important to note that he has asked and I feel free to express those views.”

Tillerson, who said he hadn’t received any classified briefings on the Russian hacks, said that it’s a “fair assumption” that Russian President Vladimir Putin authorized the attacks.

For weeks, Trump has consistently denied or played down Moscow’s involvement, although Wednesday, at a press conference, Trump said, “I think it was Russian.”

At the Tillerson hearing, Democrats — and one Republican — came out swinging.

Democrats questioned why in his prepared opening remarks Tillerson didn’t mention Russia’s alleged hacking of US elections, and they hammered his views on human rights, climate change and ExxonMobil’s ties to Russia.

Florida Republican Sen. Marco Rubio went after Tillerson about Russia’s violations of human rights and its alleged war crimes in Syria, telling the nominee that he found it “discouraging” when Tillerson wouldn’t put a label on Moscow’s actions in Aleppo.

“You are still not prepared to say that Vladimir Putin and his military have violated the rules of war and have conducted war crimes in Aleppo,” Rubio declared, pointing to information in the public record about civilians being targeted in the Syrian city.

“Those are very, very serious charges to make, and I would want to have much more information before reaching a conclusion,” Tillerson answered.

Sen. Robert Menendez, a New Jersey Democrat, challenged Tillerson on whether his business experience prepares him to represent the US to the world. “Diplomacy is not the same as deal making,” Menendez said.

He went on to question where Tillerson’s and Trump’s views actually align and asked if the two had discussed US policy toward Russia.

Tillerson said he and Trump had talked about world issues “in a broad construct and in terms of the principles that are going to guide that.” But when Menendez said that he assumed “Russia would be at the top of that considering all of the actions that are taking place,” Tillerson said, “That has not occurred yet, senator.”

Maryland Sen. Ben Cardin, the ranking Democrat on the committee, pointed to Trump’s longstanding refusal to acknowledge the intelligence community’s assessment about Russian hacking and asked Tillerson what he would do about it.

“We need to stand up to that bully in Moscow,” Cardin said.

Cardin said he would be quizzing Tillerson on ExxonMobil’s business deals with Russia, indicating that they “supported directly or indirectly” some of Putin’s more aggressive actions.

“It’s not too great of a distance from Exxon business partnerships to Putin’s slush funds” for disinformation and other activities, Cardin charged.

The former ExxonMobil CEO claims close ties to Putin, having overseen the company’s partnership with a state-owned energy giant there, work that earned him the country’s highest award for non-citizens.

In opening remarks that were interrupted by a shouting protestor, Tillerson tried to strike a balance, saying that “where cooperation with Russia based on common interests is possible, such as reducing the global threat of terrorism, we ought to explore these options.”

“We need an open and frank dialogue with Russia regarding its ambitions, so that we know how to chart our own course,” he said.

But he added that “Russia must know that we will be accountable to our commitments and those of our allies, and that Russia must be held to account for its actions.”

And he validated NATO allies’ concerns about Russian aggression but said that some of the blame lies with the Obama administration.

The US “sent weak or mixed signals with ‘red lines’ that turned into green lights,” Tillerson said. “We did not recognize that Russia does not think like we do.”

Tillerson’s big moment in the spotlight comes as CNN reported Tuesday that US intelligence agencies are investigating reports that Russia collected sensitive and potentially compromising information about Trump’s personal and financial affairs. Trump dismissed those reports as “fake news” at a press conference Wednesday.

The information, from a firm run by a former British intelligence operative, also indicated that throughout the campaign, Trump surrogates were in touch with intermediaries for the Russian government. Sen. John McCain, an Arizona Republican, became aware of the information in December and passed it to FBI Director James Comey that month.

Republicans will be key to Tillerson’s ability to get through the Foreign Relations Committee and to the Senate floor, where his nomination needs 51 votes to pass. The committee is controlled by Republicans, who hold 10 of the 19 seats. If all Democrats oppose him and they’re joined by just one Republican, Tillerson could stall there.

The oil man, who had headed the ExxonMobil empire since 2006 until retiring at the end of last year, began his journey to Washington in Texas. He was born and educated there, and spent his adult life inside the company, starting in 1975 as a production engineer after graduating from the University of Texas at Austin. He’s never worked anywhere else.