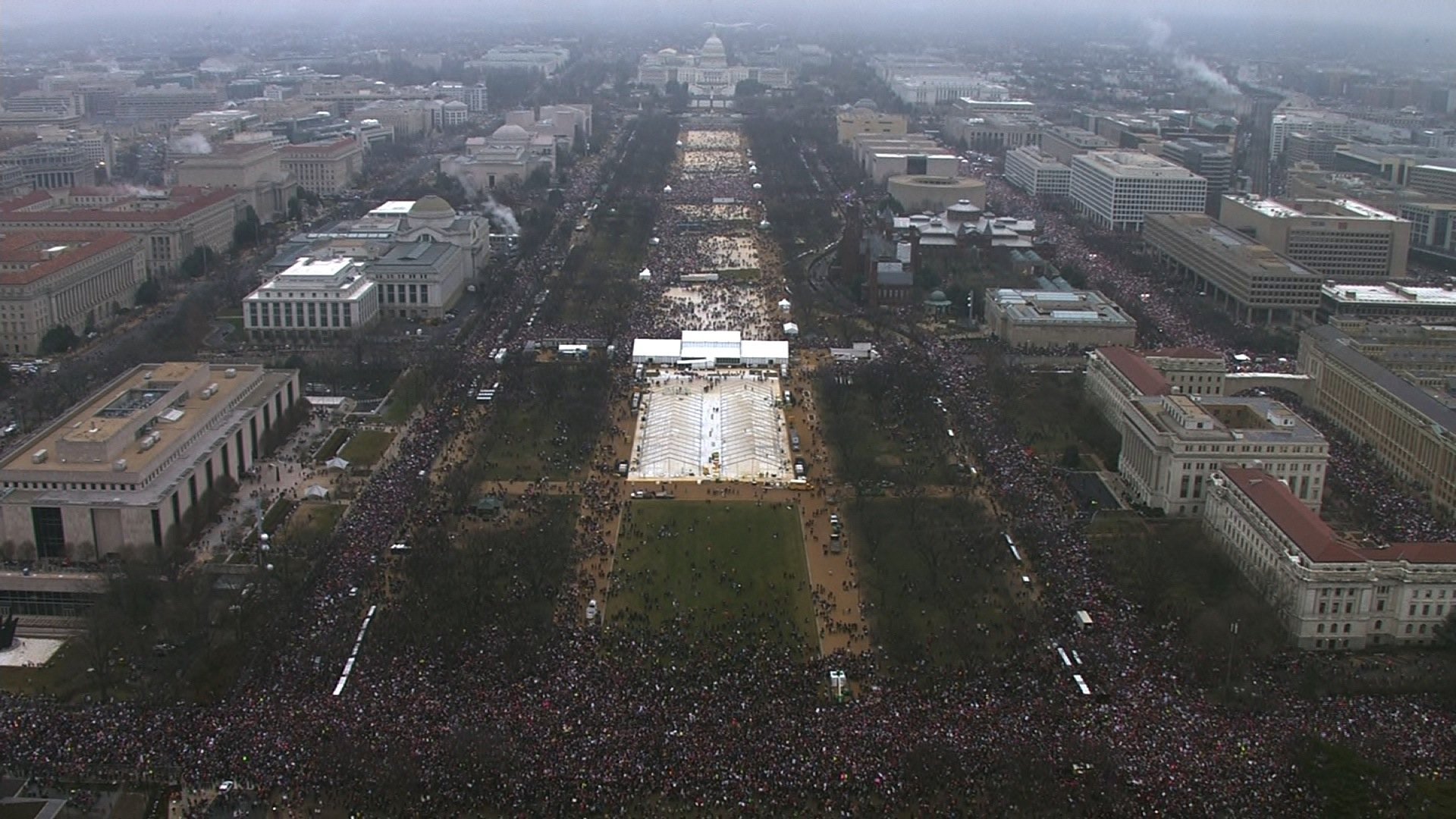 WASHINGTON (CNN) — Streets in the monumental core of downtown Washington were brought to a standstill Saturday as droves of women marched to protest Donald Trump’s presidency and his history of derogatory comments about women.

Protesters filled Pennsylvania Avenue, the same iconic street Trump walked down a day before during his inaugural parade, as they moved in the direction of the White House.

The large turnout wasn’t limited to Washington. Similar protests unfolded throughout the day in cities such as New York, where crowds spilled across Fifth Avenue. Boston Police Chief William Cross said the crowd there was too big for the march route and could not proceed because “it would be like a snake eating its tail.” In Los Angeles, some protesters eventually moved to streets parallel to the march so they could move and still feel like they were participating.

The marches in the United States and around the world amounted to a remarkable protest against Trump on his first full day in office. The question going forward is whether the marches are simply a cathartic moment for people upset over Trump’s election victory or a more enduring opposition movement.

While the mood at the main march in Washington was mostly jovial, the day underscored some of the challenges facing the left in the aftermath of Trump’s victory. It was not immediately clear what political impact the marches would have on the Trump administration or Republicans in Congress. Trump didn’t address the march during remarks he delivered Saturday afternoon at CIA headquarters in Virginia.

One central hurdle for protesters: their effort to draw attention to so many different political priorities. Even the signs they carried reflected the diversity of their agendas.

Some were there advocating for Black Lives Matter movement while others aimed to bring attention to reproductive rights. Some focused on the fight for equal pay and their opposition to the rollback of former President Barack Obama’s health care law.

They also differed in their approach to influencing the new administration. Some women wore blue and white sashes that said “dissent is patriotic.” Homemade signs and rainbow flags bore symbols of peace and love — others emblazoned with the printed message “Women Won’t Back Down.”

Meanwhile, the Democratic mantra so prevalent in the final weeks of the campaign — “when they go low, we go high” — was largely absent. Actress Ashley Judd, for instance, read a poem that said Trump bathes in “Cheeto dust.” Madonna delivered remarks laden with expletives.

Dozens of older women held signs that said “I can’t believe I still have to protest this s—.”

Many signs referenced to Trump’s vulgar comments that emerged weeks before the election that reveal him bragging on a decade old tape about his ability to grab women by the genitals because of his fame. One protester held a sign that said “If you’re going to grab my pussy, keep your hands off my healthcare.”

In interviews, marchers said they were hoping to maintain a positive vibe — a respectful demonstration of democracy and expression of free speech.

Democratic Rep. Debbie Dingell said that some 7,500 people were coming from her home state of Michigan on 100 buses. Since the election, she said “People are showing up at any kind of activist meeting because they want to do something and they don’t know what to do.”

“None of us are single issue voters,” Dingell said. “We want to make sure Americans have quality, affordable health care, funding for Planned Parenthood and that women are treated fairly in the work place.”

She said she believes Trump is “a man who listens to how people feel.”

“I think he’s a smart man, and I think he will see a movement. He will see women scared about what’s going to happen to the country,” Dingell said.

The march has evolved organically from a post-election call to action on Facebook to an organized effort that included a roster of high-wattage activists and attendees including feminist Gloria Steinem, singer Katy Perry, actors America Ferrera, Ashley Judd and Scarlett Johansson.

Leaders and activists from hundreds of left-leaning groups are joining the march, including the NAACP, Planned Parenthood, the American Federation of Teachers, as well as pro-immigrant and pro-environment groups.

Margaret Huang, the executive director of Amnesty International USA, which is co-sponsoring the march, said the group’s members were concerned about talk of a Muslim registry and Trump’s “willingness to use policies to exclude particular communities.”

“These sorts of rhetorical commitments that (Trump) made on the campaign trail cannot become policy,” she said.

Mother and daughter Deborah and Maeve Kelly of New Jersey decided to attend the march after being deeply frustrated by the results of the November election. They left the Alice Paul Institute in Mount Laurel, New Jersey, at 6 a.m. ET on Saturday, and their group plans to return to New Jersey later in the evening.

Deborah Kelly, 61 of Chesterfield Township, New Jersey, said she was inspired to march after being stunned by the number of women who voted for Trump in November.

“I didn’t feel like women were voting in their own interests,” she said in a telephone interview before Saturday’s event. “This march was a way to demonstrate to the public that there is a large group of women out there who feel that the rights and progress made over the last decade are really threatened and could be eroded.”

She encouraged her daughter to attend with her as part of the show of force by all generations: “We have to be very vigilant,” Kelly said. “This is almost a symbolic passing of the torch to the younger generation, who have to be active to protect the rights that we have fought for.”

Maeve Kelly, 25 of Lambertville, New Jersey, said she didn’t want American voters to forget about the comments Trump has made over the years judging women by their looks and their weight.

“That’s just something that really angers me, and I don’t think it has any place in my world,” she said in an interview. “It feels like everything we have worked toward, and all that suffragettes worked toward — so we could vote and be successful — is threatened now.”

The march, she said, is “mostly just a message of solidarity.”

“There are so many people traveling from all over the country to show that we are going to stand together and not let the President of our country bully us or make us feel like we don’t belong,” she said. “It’s really just taking a stand for women’s rights.”