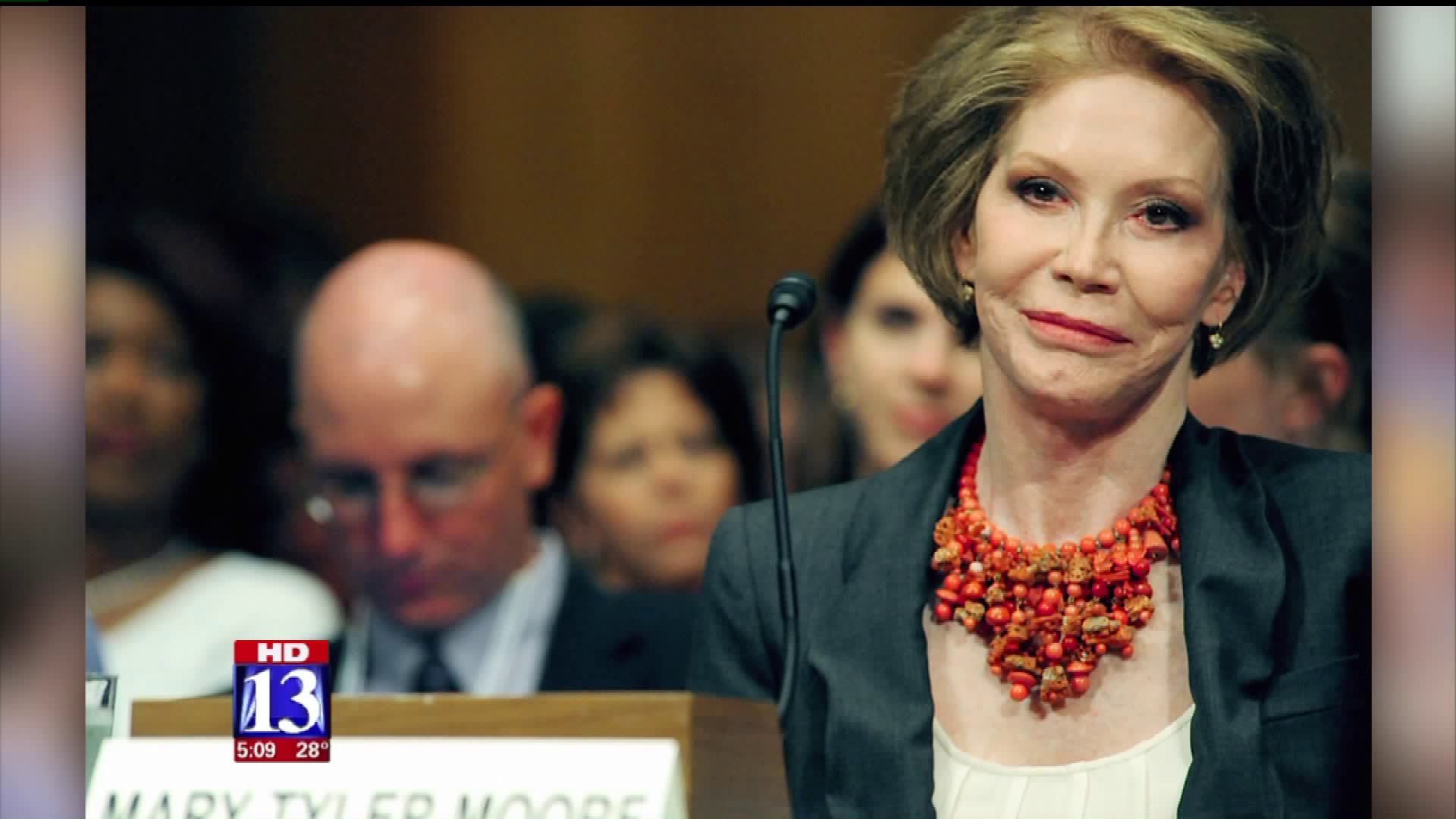 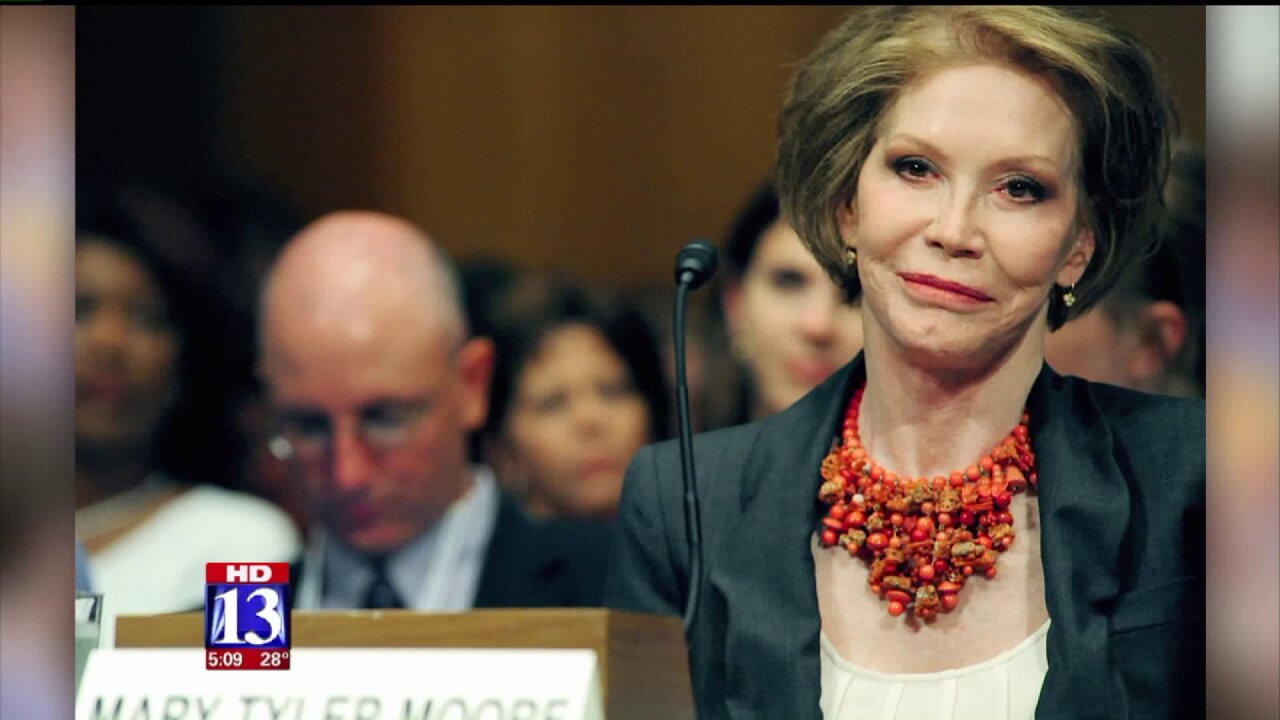 SALT LAKE CITY -- Losing beloved actress Mary Tyler Moore was not only a loss to Hollywood, but also a big loss for the Type 1 diabetic community.

Moore was diagnosed with Type 1 diabetes when she was 33 years old. She died on January 25 at age 80 with her loved ones by her side, including her husband of 33 years.

Moore spent decades advocating Congress to raise money to fund research to find a cure. She worked closely with the Juvenile Diabetes Research Foundation and was made the non-profit’s international chair in 1984. She also chaired its Children’s Congress.

The Children’s Congress was started by a 9-year-old boy from Massachusetts named Tommy Solo, who asked his parents why only parents were going to Washington D.C. to ask Congress to vote on legislation that supports funding research for a cure.

The program began in 1999 and two children with Type 1 diabetes were selected from each state to go to D.C. and meet with their representatives in Congress. Moore is seen in photographs and videos meeting those children over the years, giving them advice and inspiring them.

Katherine McCullough, a senior at Davis High School, is one of those children. In 2009 she was selected from Utah’s JDRF to go to D.C., where she got to meet Moore.

“It was amazing,” Katherine said. “...It was a year after my diagnosis, and just being surrounded by so many other kids that have the same struggles that I did and knowing that it wasn't just like ordinary people [who get Type 1 diabetes], here was someone who has made a difference in the world that was advocating with a bunch a people who haven't really done anything in the world yet. It was awesome to have her there and advocating with us.”

Katherine’s little sister was diagnosed a few years later with Type 1 diabetes. They both learned to be inspired by what Moore was doing for JDRF's advocacy efforts.

“Definitely inspired,” Katherine said. “It made me realize that just because I had diabetes didn't mean I couldn't do all the things I wanted to do. If I wanted to become an actress I could. And there wasn't a limitation there because she had done it, so it definitely gave me hope that my choices of my profession and my future wasn't limited because of it.”

Katherine’s father, Scott McCullough, has been to a couple of Children’s Congress events now with both his daughters. He remembers well though what Moore did for that year in 2009 with Katherine.

“The best part of the interaction with Mary Tyler Moore was at the Senate hearing,” Scott said. “They had all 150 children sit on the Senate floor, and as she testified before Congress about life with Type 1 diabetes and again asked Congress to fund the special diabetes program and it was really inspiring."

Scott and his family have been a big part of the Utah/Idaho JDRF chapter. They have raised $60,000 for research over the last several years, both in walks and bicycle rides around the country. Scott also is a former Utah/Idaho JDRF board president.

He said he admired how Moore chose to be a voice for those with Type 1.

“Just to watch her passion for the cause and her passion for the children and the fact that this affects her life and she wants to make life better for her and everybody else who suffers from T1D, is wonderful," he said. “As a parent there is nothing you could wish for more than have people get behind the cause that you believe in, and so to have people who have a worldwide influence and are willing to stand up on that stage and say ‘Join me in this, fight with me,’ that is huge to us as parents. To feel like, ‘Hey, we can do this because here are people out there like Mary Tyler Moore and are making a difference.”

Katherine said Moore did more than deliver a message and demand votes from Congress, she also made an impression and left a message with the children.

“I do remember one of her last sentences before we finished the hearing was directed towards us, the kids that were there, was 'Don't let this disease hold you back from what you want to do,’” Katherine recalled.

That message has stayed with Katherine. She aspires to become a pediatric therapist who works with Type 1 diagnosed children and assures them they are never alone, there is always support, and never to give up on themselves.

“I definitely want to have a job where I can help other people and help those kids that feel the same way, so I can make sure they know there is support out there," she said.

Katherine said she owes it to Moore, to her family, to her little sister, and to herself to keep fighting for a cure.

Even though Mary Tyler Moore is gone, her message has stuck, and her fight is not over.

JDRF has dedicated a website for fans and friends to write a tribute to Mary Tyler Moore for others to read.