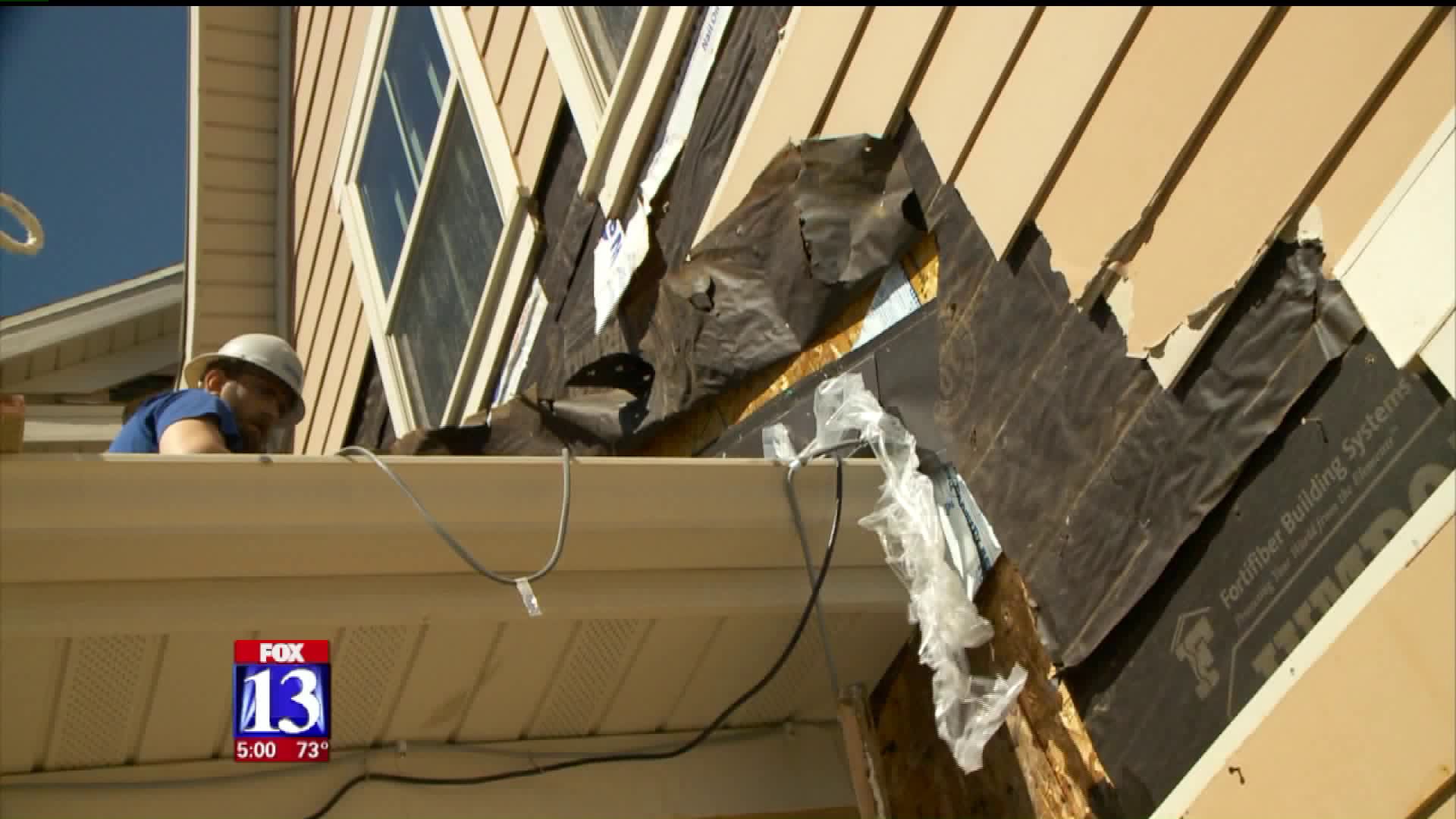 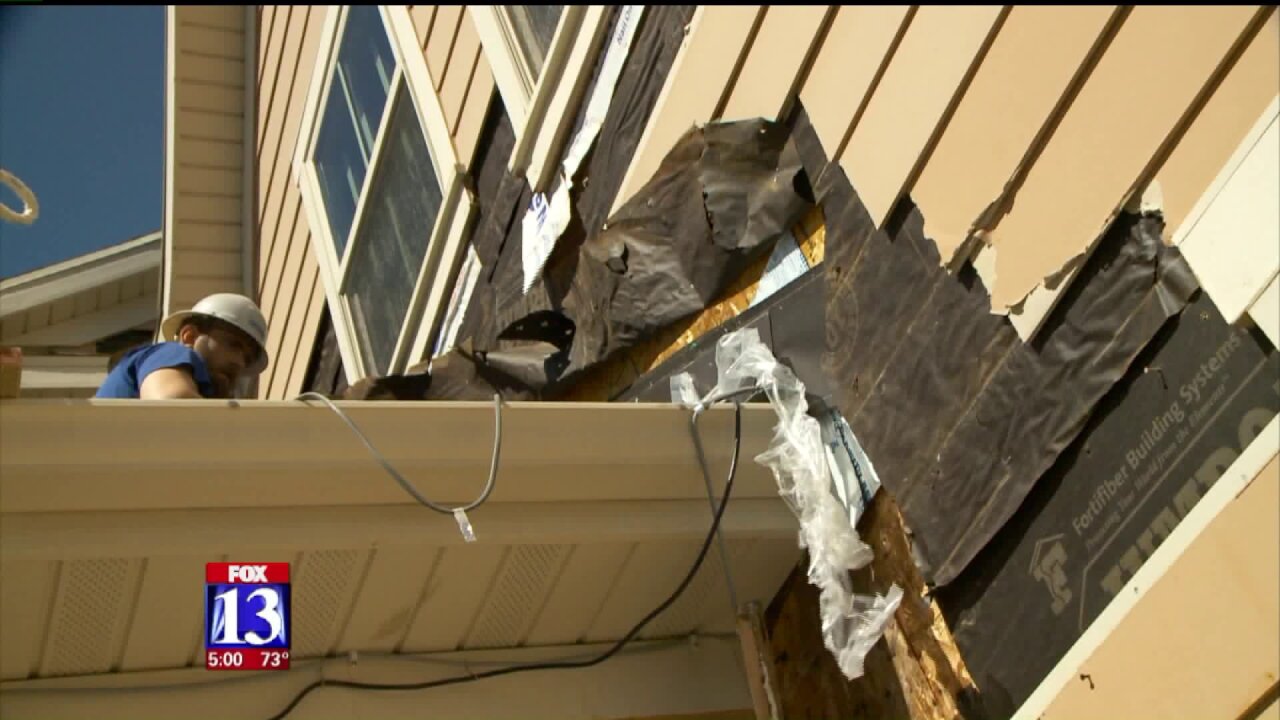 SOUTH JORDAN – Hundreds of families living in the Daybreak community are suing their homebuilders.

They claim builders cut corners on the construction of their homes and now they’ll be stuck with millions of dollars in repairs.

Crews have been making the rounds in Daybreak neighborhoods, temporarily fixing dozens of problems that have surfaced in 390 townhomes built within the last decade.

Inspectors allege extensive damage, including cracks in stucco due to improper installation of seals against water damage. From rotted trim, to roof and window leaks, consultants say shoddy work has put people at risk in their homes.

Gores issued his findings to the builders, Holmes Homes, and Hamlet Homes.

They are being sued by three homeowners associations, including Townhome 1. Homeowners accuse builders of cutting corners and failing to maintain their homes.

“I call them cell phone contractors,” said Gores. “They're not on the ground watching their subcontractors doing all their work 100% of the time. Otherwise, the quality would be there.”

Elizabeth Hill bought her home in 2007. First, she was dealing with leaking on her patio, and then her roof.

“The whole house is falling apart," she said. "I don’t know a lot about construction, but I can see when paint is peeling there’s a problem.”

Homeowners are looking for relief.

“It's just devastating. These are homeowners who are looking at $50,000 to $60,000 per unit to properly fix these units, and they don't have the money,” said John Morris, an attorney for Townhome 1 community.

Holmes Homes issued this statement regarding the issue:

“Since 1890, the Holmes family has built quality residences and for those five generations, we’ve focused on attention to detail with every customer. We fell in love with the Daybreak concept years ago and the developers fell in love with our innovative designs. Since 2004, the over 1,300 homes we built in Daybreak not only complied but also exceed industry construction standards, including EnergyStar certification. We also hired a third-party inspector for many of our projects that took a detailed photos during the entire construction process to ensure quality. We have thousands of photos showing the proper construction of the townhomes involved in the litigation. Over the years, all buildings require maintenance. The homes identified in this townhome litigation include those that were built up to or over a decade ago.

We are disappointed that this issue has escalated to this level and it’s unfortunate that we were not informed of these claims until litigation was implicated. Holmes Homes has always responded to all warranty claims. We pride ourselves on taking care of our customers and have always had an open line of communication with our homeowners. We take our legacy seriously and want our homeowners to be happy with their purchase.”

Hamlet Homes has been brought into a lawsuit by the Daybreak Townhome 1 Owners Association. These allegations are of great concern to all of us at Hamlet Homes. We pride ourselves in building lasting homes that improve families’ lives and are proud to say we have crafted more than 3,400 homes in Utah.

The homes identified in this complaint were built 6-10 years ago, and the allegation that “water has intruded the wall assemblies of all the buildings” was a huge surprise to us. In the previous 10 years, we have not received a single homeowner complaint for related problems in these homes.

Last week, we received an Investigation Finding Report from J2 Building Consultants, Inc. regarding Daybreak Townhome 1. This report is an investigation into the construction of 389 homes built in Daybreak by Holmes Homes and Hamlet Homes. The report does not distinguish between the two builders. Of the 389 homes identified in the report only 29% were built by Hamlet Homes.

Further, while very few of the items identified in the report were on Hamlet built Homes, most related to lack of maintenance. It is the responsibility of the homeowner’s association to maintain the exterior of the homes. Early evidence suggests that these homes exteriors were not properly maintained, leading to other larger issues as the homes aged.

At this time, due to the ongoing nature of the litigation, we have no other comments.

Daybreak Townhomes info from Holmes Homes by kstumarkgreen on Scribd