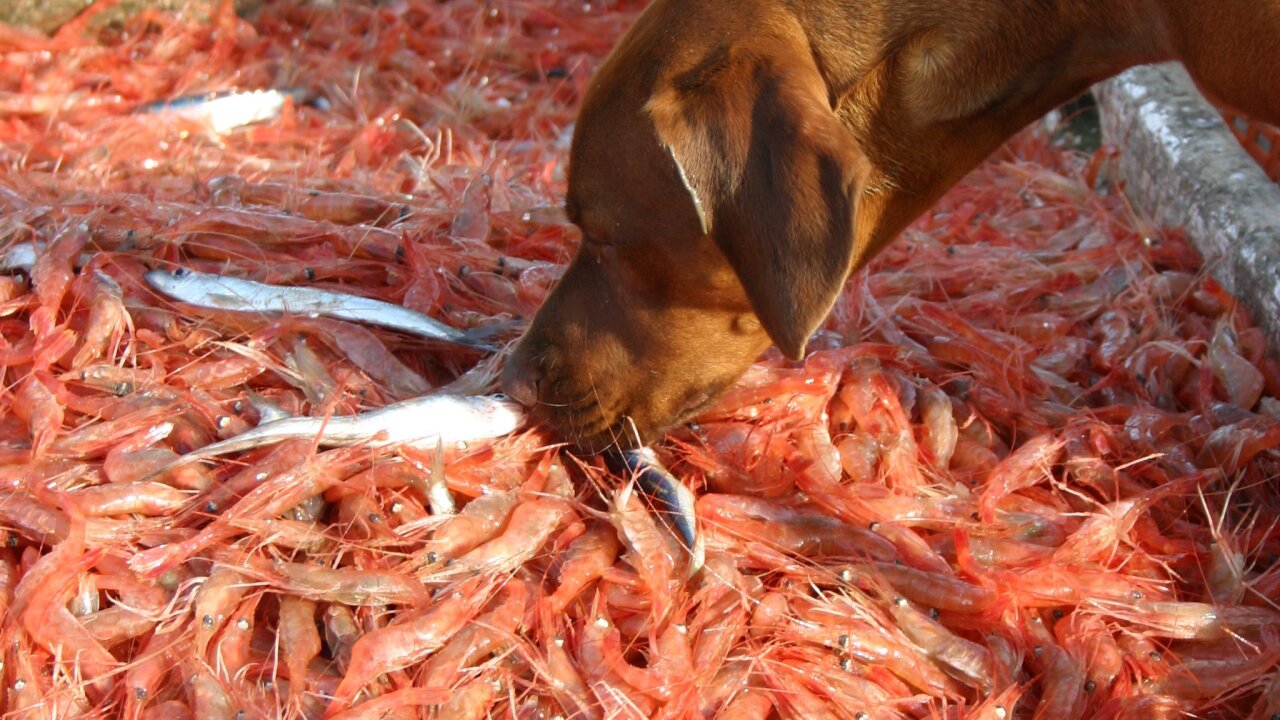 Maine’s fishing industry has been declining for years due to factors like overfishing and increased regulation, but there’s another culprit eating away at profits: Maine’s ocean waters are warming — and it’s killing northern shrimp. Fisherman Gary Libby’s dog takes a bite out of the once-plentiful shrimp catch.

GULF OF MAINE — David Goethel wishes he could retire.

At 63, he’s been fishing off the Gulf of Maine for over 34 years. Shrimp used to be plentiful there. Back in 2000, Goethel remembers seeing 100 commercial boats out in the harbor. Now, he’s just one of a handful of local fisherman struggling to make a living.

“There was life on the docks, there were people working,” lifelong fisherman Arnold Gamage, 64, agrees. “Now, it looks like a ghost town.”

Maine’s fishing industry has been declining for years due to factors like overfishing and increased regulation, but there’s another culprit eating away at profits: Maine’s ocean waters are warming — and it’s killing northern shrimp.

Goethel, Gamage and other fishermen used to look forward to shrimping as a way to augment their income in the cold New England winters.

“Now, I see a lot of those same people, they’ve got 4-wheel trucks and they’re trying to plow snow to take in some kind of income,” Goethel says.

Regulators at the Atlantic States Marine Fisheries Commission banned commercial shrimping in 2014. The goal was to give northern shrimp a chance to repopulate. While the ban has helped, regulators are still worried about the species’ survival.

Why is the Gulf of Maine warming?

Scientists aren’t certain, but Appelman and other experts suspect climate change is playing a role.

The world’s oceans in general are warming, partly because the atmosphere is getting hotter and oceans absorb that heat. But there’s something particularly fishy going on in the Gulf. It’s warming faster than most other places on earth.

“We don’t have any experience with this type of warming,” explains James Manning, an oceanographer at the Northeast Fisheries Science Center. He’s been monitoring the Gulf’s deep temperatures for the past decade.

It’s not just the ocean’s temperature that’s hurting the shrimp — the currents are also changing. That’s because warmer temperatures are causing icebergs to melt and alter the ocean’s salt levels. When that happens, it triggers a change in currents.

All this is bad news for shrimp. They’re used traveling to Maine on specific ocean currents where fishermen like Goethel can find them. Changing currents mean those shrimp could wind up far from Maine, explains Manning.

Shrimping used to account for around 30% of Goethel’s income. While he recognizes that the ban is necessary, he still misses that extra cash.

Lifelong fisherman Gary Libby is also feeling the squeeze. He’s been trying to sell his shrimp boat but no one is buying. He’s lost between 30% to 40% of his annual income since the ban was instituted.

“With no shrimp season for fishermen in the state of Maine the struggle continues,” Libby says. “I wish I could just catch a few shrimp during the winter each year.”

While Geothel, Gamage and Libby fish year-round for other catch, like cod and flounder, Goethel is worried for those species as well. They, too, are feeling the effects of the warming Gulf.

Flounder and cod like a specific temperature range, and if the Gulf continues to warm, they’ll likely move to deeper waters where commercial fisherman can’t catch them.

Manning suspects the Gulf of Maine will continue to warm but hopes it won’t at its current rate.

“I’d be afraid to predict it continue the way it is,” Manning says. Goethel, Gamage and Libby are in the same boat. They’re hoping colder temperatures will make a comeback, not only for the sake of their businesses, but for their communities.

“The people in Maine just love shrimp,” Gamage says. “There is no shrimp in the world that can come close to comparing to Maine shrimp.”