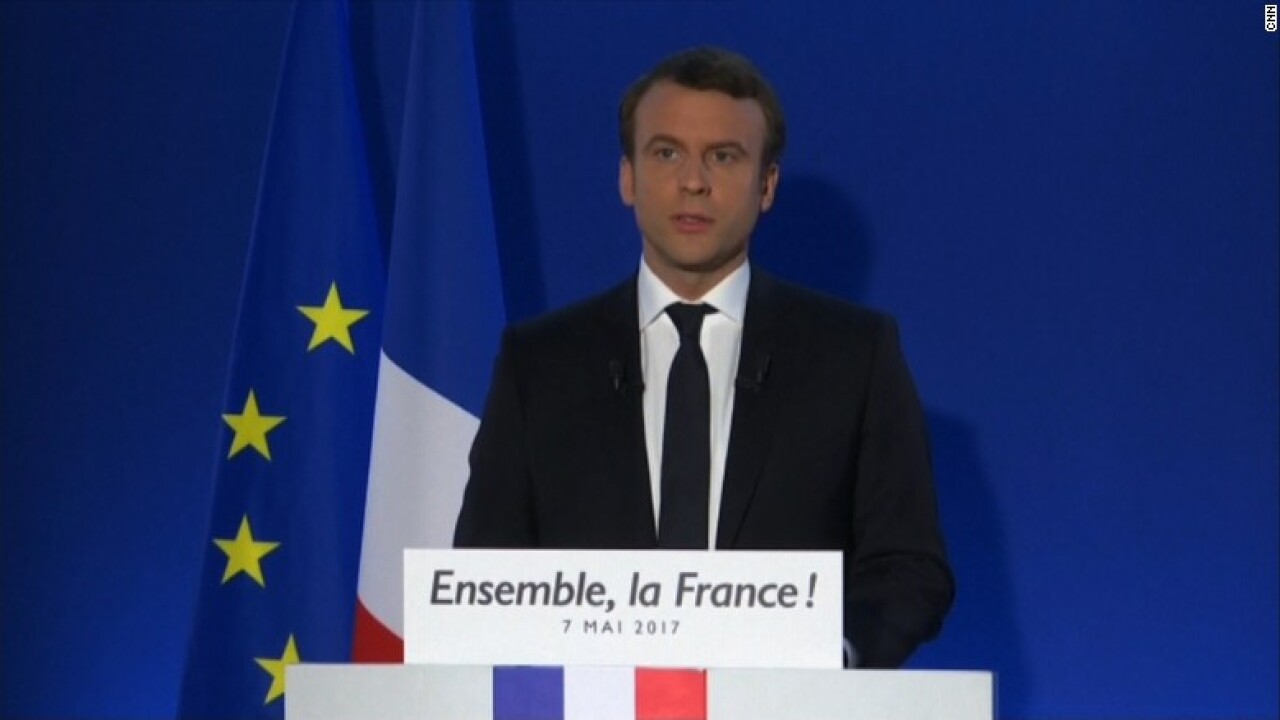 (CNN) — Exit estimates project he’s on course to become the youngest leader of France in the history of the Fifth Republic, but when Emmanuel Macron announced his bid for the presidency it was met with amusement by his opponents.

At the age of 39, with no party to back him and no experience of elected office, many in the political classes dismissed his candidacy as a publicity stunt.

Prime Minister Manuel Valls — who would go on to fail in his own attempt for the Élysée Palace — had described Macron as “populism lite,” while Francois Fillon, the Republican candidate whose campaign was derailed by scandal, said he was certain the French public would “not place their fate in the hands of a man with no experience, who had demonstrated nothing.”

France’s politicians, criticized for being out of touch with ordinary people, failed to see the threat Macron posed.

“There are no words which are strong enough to describe Macron’s achievement,” said Emmanuelle Schön-Quinlivan, lecturer in European politics at University College Cork.

“He saw that the party system was going through a real collapse and he was helped by Fillon scandals, which engulfed the Republican party.

“Every hurdle where we thought Macron’s bubble would burst, it didn’t,” she said.

But with the vote over, the French public will quickly expect Macron to bring a sense of unity to the fractured country.

For many, the election was about the desire for a shift away from the current political classes, which many feel have left them behind.

Beset by high unemployment, a stagnant economy, concerns around immigration and security fears following a spate of terror attacks, Macron will take the helm in France a difficult time.

“Macron will inherit a country totally fractured in two — everyone to the west voted for Macron, and those to the east went for Le Pen,” said Schön-Quinlivan.

“It’s a matter of reconciling those two France’s and connecting with those who feel they have been left behind by globalization.”

The specter of Le Pen’s presidential bid will loom large over Macron, if he can’t find solutions to tackle unemployment, Schön-Quinlivan, is “almost certain” she’ll be president in 2022.

Europe breathes a sigh of relief

While the election of Le Pen would have been greeted with horror in the corridors of Brussels and with trepidation in most other EU countries, Macron believes that France must remain at the heart of Europe and work closer with its neighbors.

So it came as little surprise that as soon as the exit estimates were published, some of Europe’s most senior politicians were already congratulating Macron.

European Commission chief Jean-Claude Juncker wrote on Twitter that he was “happy that the French chose a European future,” while president of the European Council Donald Tusk congratulated the “French people for choosing Liberty, Equality and Fraternity over tyranny of fake news.”

British Prime Minister Theresa May and German Chancellor Angela Merkel were also quick to send their congratulations to Macron, who has been outspoken of his desire to work with France’s European partners.

Macron has been adamant that closer integration between the countries that share the euro will benefit not only France, but the EU as a whole. However, he’s advocated for reform of the currency union and has said the Eurozone should create its own budget.

A free-trade supporter, he campaigned in favor of CETA, the EU’s free trade agreement with Canada, but he’s cautious when it comes to Europe seeking new deals.

He has also spoken against reinstating borders in Europe, instead seeking more integration within the trading block.

“Macron is viewed as an ally in Brussels, for the Euro and for the people who support the status quo,” said Philippe Marliere, Professor of French and European Politics at University College London.

“The fact he is young is also seen as a breath of fresh air in French politics where leaders are traditionally older.”

The third biggest economy in Europe, France has not recovered as strongly from the global financial crisis as its neighbors. Its unemployment rate, which stands at roughly 10%, is higher than the Eurozone average and more than double the level of joblessness in Germany and Britain.

GDP figures are finally improving, but they remain at very low levels, while the growth outlook from the International Monetary Fund is one of the weakest in the union.

“The economy is doing slightly better and we’ve had a slow decline in unemployment in the past few months, but we’ve had mass unemployment for 30 years,” said Schön-Quinlivan.

“This is the key issue that people want to see solved.”

Among young people unemployment is an even bigger problem, with 24% of people between the ages of 15 and 24 without a job.

During the campaign, Macron promised to cut corporate tax rates gradually to 25% from 33%. He also wants to cut local housing taxes for the majority of French people and reform the wealth tax.

He has pledged to cut public spending by 60 billion euros ($64 billion) a year, partly by making the government more efficient. He said he would cut up to 120,000 government employees by not filling positions as workers retire.

He’s also outlined plans for a big economic stimulus, which he said would radically transform the French economy, pledging to spend €50 billion over five years on training, energy and the environment, transportation, health and agriculture.

“People have been left behind and that goes for these communities which are not automatically immigrant-based communities or poor immigrant communities,” Dominic Thomas, Professor of French and Francophone Studies at UCLA told CNN.

“They are people living in the industrial north and rust belt, whose communities have been completely decimated by industrial change.”

It’s a situation, he says, that’s no different to the rust belt in the US or the northeast of England.

One of Macron’s first jobs is to name his prime minister, something he had been unwilling to do before the election.

In the past he has said he would like to appoint a woman with parliamentary experience.

What is clear is that Macron will need to move fast, with the first round of the lower house legislative elections taking place on June 11 and the second round a week later.

The Socialist party — whose leader Francois Hollande is the outgoing president — currently holds the most seats (258) with the center-right Republican party the main opposition with 185 seats.

Macron is hoping his “En Marche!” party can make in roads in the parliamentary elections.

One recent poll by OpinionWay-SLPV Analytics for the Les Echos newspaper showed that Macron’s “En Marche!” could win the largest share of Parliament’s 577 seats.

The survey — the only one to be conducted so far — looked at 535 of the seats, so an outright majority could also be on the cards.

It would mark a meteoric rise for the fledgling party that launched less than a year ago.