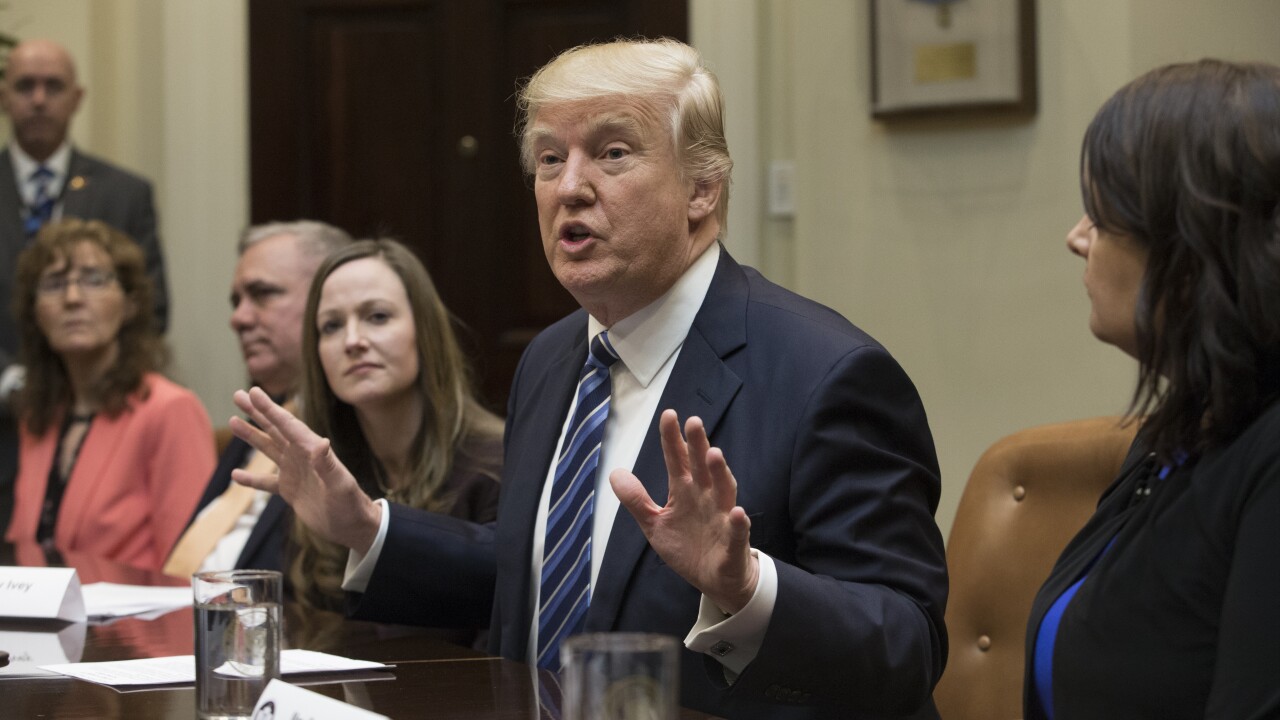 WASHINGTON, DC – MARCH 13: President Donald Trump attends a meeting on healthcare with Kim Sertich (L) of Arizona, Elias Seife (2-L) of Florida, Brittany Ivey (3-L) of Georgia and Carrie Couey (R) of Colorado in the Roosevelt Room of the White House on March 13, 2017 in Washington, DC. The House Republicans’ bill known as the ‘American Health Care Act’, which is intended to replace the Affordable Care Act and is endorsed by President Trump, has faced criticism from […]

(CNN) — Former FBI Director James Comey wrote in a memo that President Donald Trump asked him to end the investigation of national security adviser Michael Flynn, according to a sources familiar with the matter.

Comey was so appalled by the request that he wanted to document it, sources said. Comey shared it with FBI senior officials, according to sources.

“I hope you can let this go,” Comey wrote, quoting the President. CNN has not viewed the memo but sources described it to CNN.

The memo is the clearest sign yet of potential interference by Trump with the investigation into whether members of his campaign team colluded with Russian officials.

” ‘Close it down’ is an instruction to stop investigating President Trump’s campaign. Richard Nixon was impeached in 1974 for telling the FBI to stop an investigation of his campaign. That’s what Watergate was,” Toobin added. “If (Comey’s) telling the truth, I don’t know how anyone can see this comment as anything but obstruction of justice.”

Writing the memo was “not out of character,” especially if he was concerned about the legality or moral issues, according to a former Justice Department official.

The New York Times first reported news of the memo.

Multiple White House officials refuted the claim on Tuesday, including one who said a “conversation of that nature” did not happen.

‘A number of memos’

Comey was in the Oval Office briefing the President along with the vice president and attorney general on February 14, according to a source close to Comey who has a copy of the memo. After the briefing, Trump “asked Sessions and Pence to leave,” the source told CNN.

According to a memo, Comey wrote about the encounter and shared with confidantes, the President said: “I hope you can see your way clear to letting this go, to letting Flynn go. He is a good guy. I hope you can let this go.”

He told Comey that Flynn hadn’t done anything wrong.

Comey was “concerned” that the President was trying to “stop the investigation,” the source told CNN. “He wrote a number of memos, a great many if not all were about contacts with Trump — particularly the ones that made him feel uneasy.”

The source did not know how many memos Comey had written.

“He would love to have them,” the source said. “One of his reasons for writing these memos is the concern this couldn’t be corroborated — but that could be met if there are tapes.”

Trump has looked to stay loyal to Flynn, despite the fact that he fired his top national security aide in February after it became clear that he did not properly disclose the nature of conversations he had with Russian officials.

Trump, in a series of public comments and interviews, has suggested that Flynn was being mistreated and has heralded him as a good man.

“Gen. Flynn is a wonderful man. I think he has been treated very, very unfairly by the media, as I call it, the fake media in many cases,” Trump said in February. “And I think it is really a sad thing that he was treated so badly.”

Lawmakers want to hear from Comey

Reaction from Capitol Hill was swift, with Republicans and Democrats alike demanding answers from Comey.

Sen. Lindsey Graham, a South Carolina Republican, said Tuesday that the former FBI director should testify before Congress about his conversation with Trump.

And Sen. Dianne Feinstein told reporters that she “absolutely” thinks Comey should testify before the full Senate Judiciary Committee on the conversation.

“I believe we should begin to hold hearing as a full committee on this,” she said.

CNN’s Tom Lobianco and Jeremy Herb contributed to this report