SALT LAKE CITY — Utah's Hogle Zoo will soon be home to two young female polar bears after the death of Rizzo, who lived at the Zoo for five years before dying of kidney failure in April.

Nora and Hope, two unrelated bears, who are both just over a year old, will soon swim together at the zoo.

Hope is a one and a half year old polar bear from the Toledo Zoo, where she is old enough to move away from her mother.

Nora is also a year and a half old. She'll come to Utah from the Oregon Zoo where she was raised by Zookeepers after the zoo's adult male bear died shortly after she arrived.

"Saving polar bears is a huge commitment our Zoo is making," Liz Larsen said, Director of Conservation. "We're so excited that we have this opportunity to demonstrate our leadership in polar bear conservation with these cubs."

"It was designed to have males, females and cubs. So we certainly have the size, a large backholding area, 135 thousand gallons of chilled water and we have air conditioned spaces so our facility is ready to go," said Hansen. 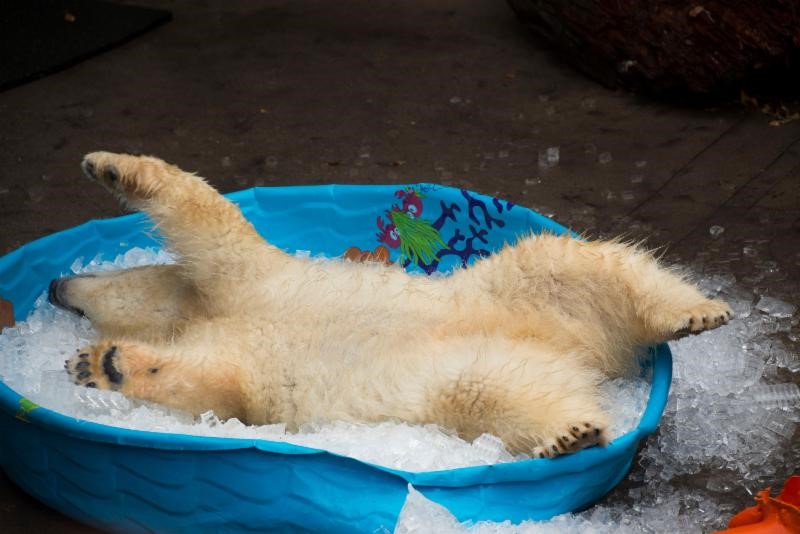 Officials said her mother was leaving her unattended in the den for prolonged periods of time so keepers made the difficult decision to hand-rear the tiny cub.

1.5-year-old Nora, from the Oregon Zoo

She was sent to Oregon Zoo last September, in the hopes she might be mentored by a senior bear.

"For a young bear that was hand-raised, the companionship of another bear is so important for developing social skills," Amy Cutting said, who oversees the Oregon Zoo's marine life area.

But the Oregon Zoo lost their senior bear shortly after Nora arrived.

"From the time she was a week old, Nora has interacted almost exclusively with people," Cutting said. "Hope should be a great companion for her. The two bears were born less than a month apart and they have a similar youthful energy."

Hope, named after Point Hope, Alaska, as well as a nod to the optimism for the future of the endangered species, was born at Toledo Zoo on December 3, 2015.

The Association of Zoos and Aquariums and the Species Survival Plan recommended Hope's transfer this fall.

The SSP prioritizes putting young animals together at the point where they are mature enough to leave their mothers.

In the wild, young bears separate from their mothers around age two and may band together to survive the harsh conditions in the Arctic.

"In her almost two years, Hope has been a great ambassador for her endangered species and become much beloved by the Toledo Zoo community," Shayla Moriarty said, Toledo Zoo's director of communication.

The Hogle Zoo said the polar bear is among its "Big 6 Conservation Species," six species receiving the focus of the Zoo's conservation efforts.

"As one of our signature programs, we concentrate our financial and staffing resources to try to save this particular species," Liz Larsen said. "Our leadership in the zoo community toward conservation has helped secure us as a flagship institution for such a high-profile species as polar bears."

Hogle Zoo said it has a long history of caring for polar bears, offering a home to the species from 1957 to 2003, during which time Hogle Zoo produced 10 offspring.

The opening of Rocky Shores, in 2012, saw the much-anticipated return of the polar bear after a nine-year absence.

The zoo said it was designed to be a long-term breeding and conservation facility and hopes to contribute to the study and science of polar bears for years to come.

Watch: Hope the polar bear from the Toledo Zoo