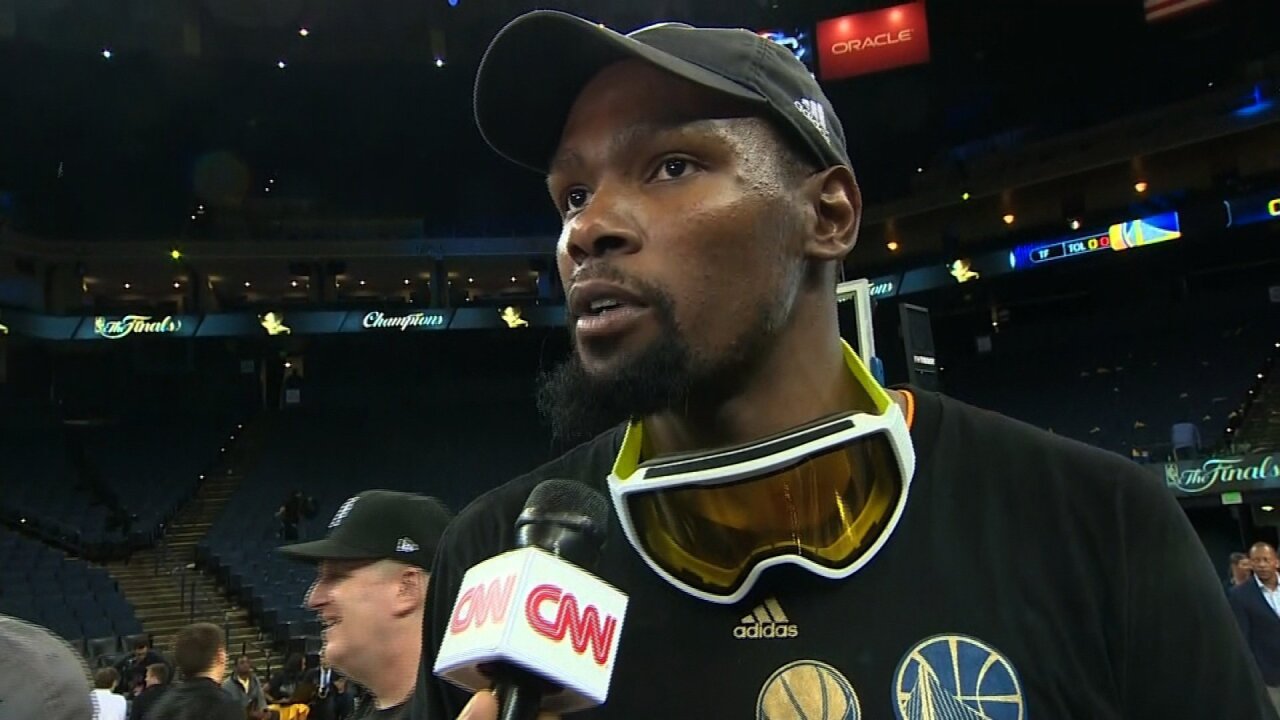 Kevin Durant joined the Golden State Warriors to win his first NBA championship. The Warriors defeated the Cleveland Cavaliers 129-120 in Game 5 of the NBA Finals on Monday, June 12, 2017, clinching their second title in three years and their fifth in team history, avenging the loss to Cleveland after blowing a 3-1 lead a year ago.

The Warriors defeated the Cleveland Cavaliers 129-120 in Game 5 of the NBA Finals, clinching their second title in three years and their fifth in team history, avenging the loss to Cleveland after blowing a 3-1 lead a year ago.

Durant led Golden State with 39 points, seven rebounds and five assists and was named NBA Finals MVP in a unanimous vote. He scored 30 or more points in all five Finals games.

“I couldn’t sleep for two days,” Durant told reporter Doris Burke. “I was anxious. I was jittery. I just wanted to lay it all out there.”

Following Monday’s win, he embraced his mother, Wanda Durant, on the court.

Said Stephen Curry of his teammate: “The way that he embraced the opportunity in The Finals, it was unbelievable.”

Durant: ‘It’s all about the group’

This was the first time in NBA history the same two teams met in the NBA Finals for a third straight time. The Warriors won the title in 2015 in six games, while the Cavaliers dramatically won in 2016 in seven, becoming the first team in NBA history to win a series trailing 3-1.

Durant, who famously called his mom the “real MVP” when he won the NBA MVP Award in 2014, knew what it felt like to lose a 3-1 lead — and losing to LeBron James. In the 2012 NBA Finals, Durant was playing for the Oklahoma City Thunder and lost to James — who was then with the Miami Heat — in five games.

After the Cavaliers won the title in 2016, Golden State’s focus turned to a player who wasn’t in the NBA Finals: Durant. He was entering free agency after the Thunder gave away a 3-1 lead against the Warriors in the Western Conference finals. It spurred the most frenzy surrounding an NBA free agent decision since James announced in 2014 that he would return to the Cavaliers after spending four seasons with the Heat.

With a superstar in Durant teaming with another in Curry — as well as with Draymond Green and Klay Thompson — it made Golden State a super team. The only unknown was if the team chemistry would be disrupted with Durant’s addition.

The answer: An emphatic no. The group was close to unstoppable in the regular season and postseason. While the Warriors didn’t surpass their NBA record of 73 regular-season from 2016 (they settled for 67 this year), they still had the NBA’s best regular-season record. Golden State went 16-1 in this year’s playoffs, good for the highest winning percentage (.941) in a single postseason, surpassing the Los Angeles Lakers from 2001 (15-1, .938). Twelve of the Warriors’ 16 playoff wins this postseason were by double digits.

Not only could Durant coexist with Curry and the rest of the Warriors, but they also thrived.

“I hear all the narratives throughout the season that I was joining, I was hopping on bandwagons, I was letting everybody else do the work,” Durant said. “But then that was far from the truth. I came in and tried to help my team. Like I said, tried to be myself, be aggressive and sacrifice as well.

“There’s some games I might not get shots, as many shots as I’m used to getting. Some games where Steph is going to go off and hit 13 threes or Klay might hit 60 or Draymond might get a triple-double with no points. But nobody cared, as long as we won. Andre Iguodala, who is right there, he continued to preach that every single day. It’s all about the group. If your intentions are good, then that means as a team that we’re moving in the right direction.

“So I just tried to think about that, but also add my flair to the game. And it feels amazing to win a championship with these guys. I can’t wait to celebrate for the rest of the night — well, maybe the rest of the summer.”

To go with Durant’s numbers on Monday night, Curry had 34 points, 10 assists and six rebounds. Iguodala added 20 points. Green had 10 points and 12 rebounds, and Thompson had 11 points.

“You got a bunch of guys who are talented and can shoot and pass and dribble, and they’re unselfish,” Warriors head coach Steve Kerr said. “There was never any question in my mind that this was going to work. So, this is the culmination of a year where they grew together and learned each other’s games and got better and better all year, and it was just phenomenal to be part of.”

Kerr: ‘Tonight was a little different’

The Warriors also did much of this without their head coach on the sideline for an extended period of this postseason. Kerr coached the first two games of Golden State’s first-round playoff series against the Portland Trail Blazers in April but stepped away because he was experiencing complications from back surgery from two years ago.

During his absence, Kerr was still involved at practice, but he handed the game day responsibilities to assistant coach Mike Brown. Golden State went 11-0 during that stretch before Kerr returned for Game 2 of the NBA Finals. This is Kerr’s seventh championship, five of those as a player and two as a head coach.

“Winning is fantastic,” Kerr said. “I’ve been so lucky to be part of so many championship teams as a player and now as a coach, and it never gets old. But tonight was a little different, just based on the things I’ve had to go through during this time.”

Monday’s loss denied the Cavaliers a chance to repeat as champions and for James to get his fourth championship ring. It was his seventh consecutive trip to the NBA Finals, the only non-Boston Celtic to do so. It also kept the Cavaliers from becoming the first team in NBA history to come back from trailing 3-0 to win a best-of-seven series.

“As far as that team, they’re going to be here for a while,” James said of the Warriors. “They’re going to be around for a while. Pretty much all their big-name guys are in their 20s, and they don’t show any signs of slowing down. So there’s going to be a lot of teams that’s trying to figure out ways to put personnel together to try and match that if they’re able to actually face them in the playoff series, both Eastern Conference and Western Conference. Because they’re built for — from my eyes, they’re built to last a few years.”

James finished with 41 points, 13 rebounds, eight assists and two steals. He averaged a triple double during the NBA Finals.

“I left everything on the floor every game, all five games,” James said. “So for me personally, I have no reason to put my head down.”

Kyrie Irving had 26 points while JR Smith had 25.

“I broke down, so I couldn’t really finish my speech,” Cavaliers head coach Tyronn Lue said. “A lot of guys cried because they wanted it bad. And that’s all you can ask. If you give all your effort and all the fight and all the heart you got, it doesn’t necessarily mean you’re going to win, and that’s what’s tough about sports.

“I credit our guys. I thought they gave everything they had, and we fought, we competed, and we never gave in, but they beat us.”