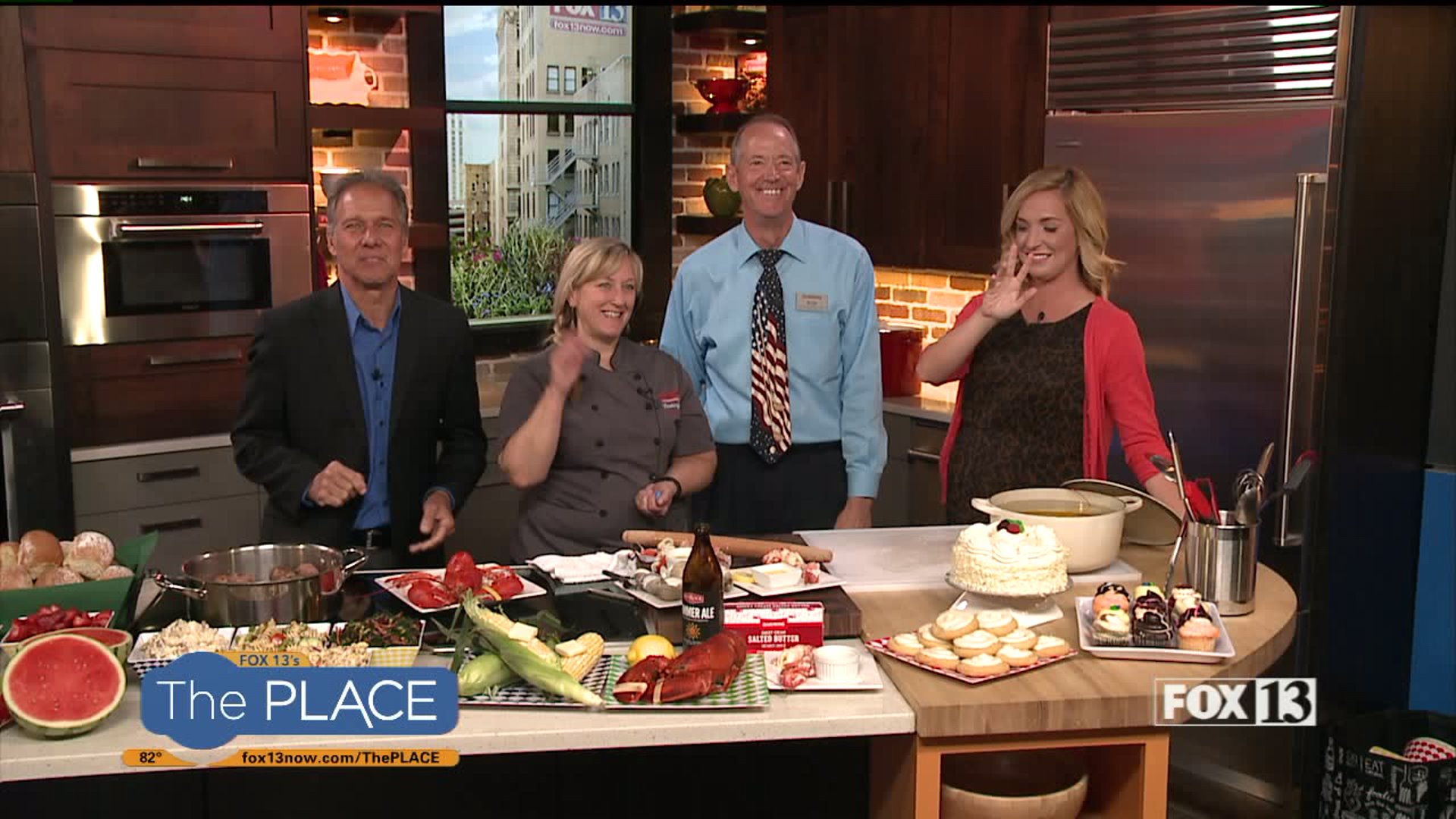 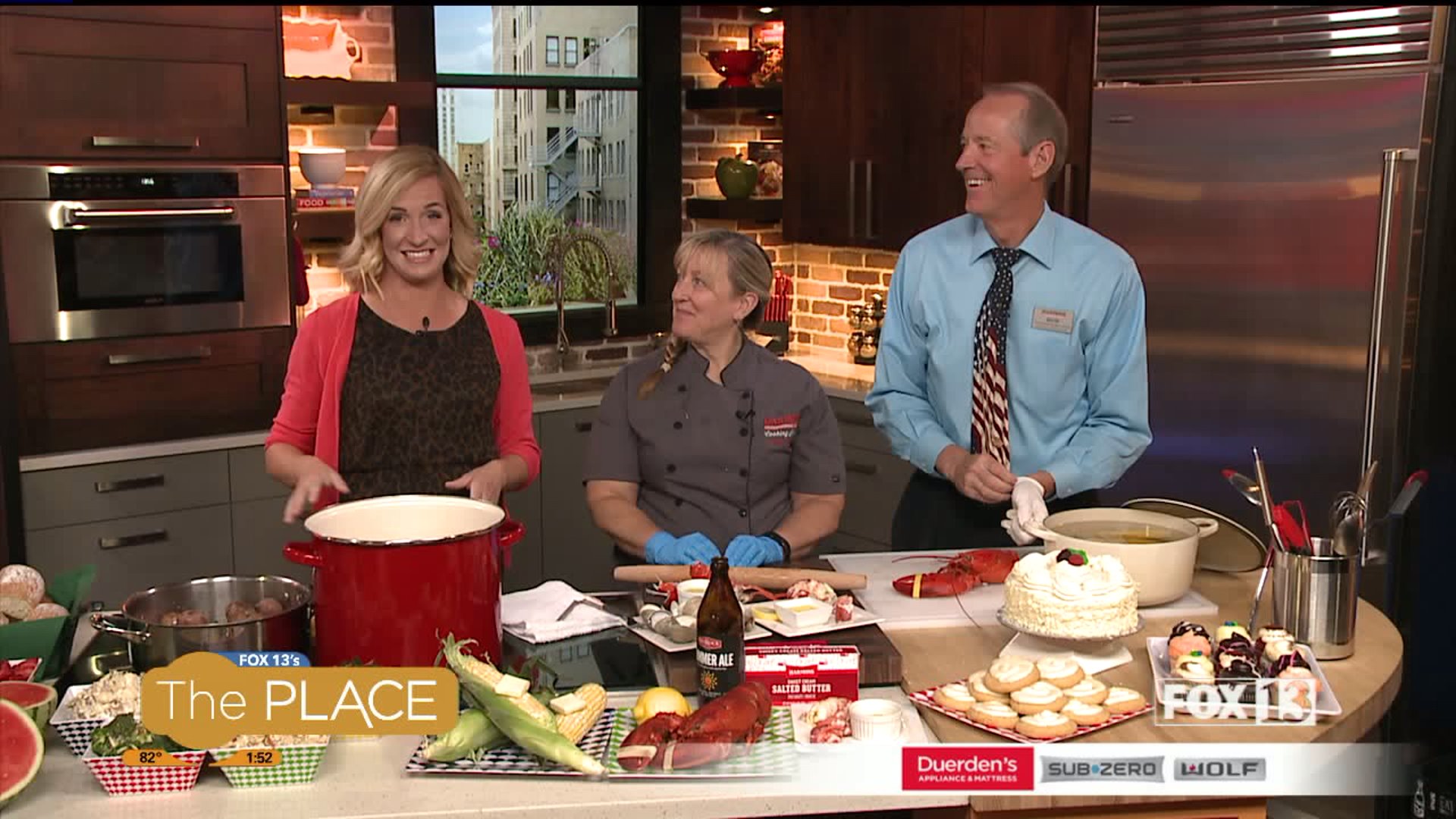 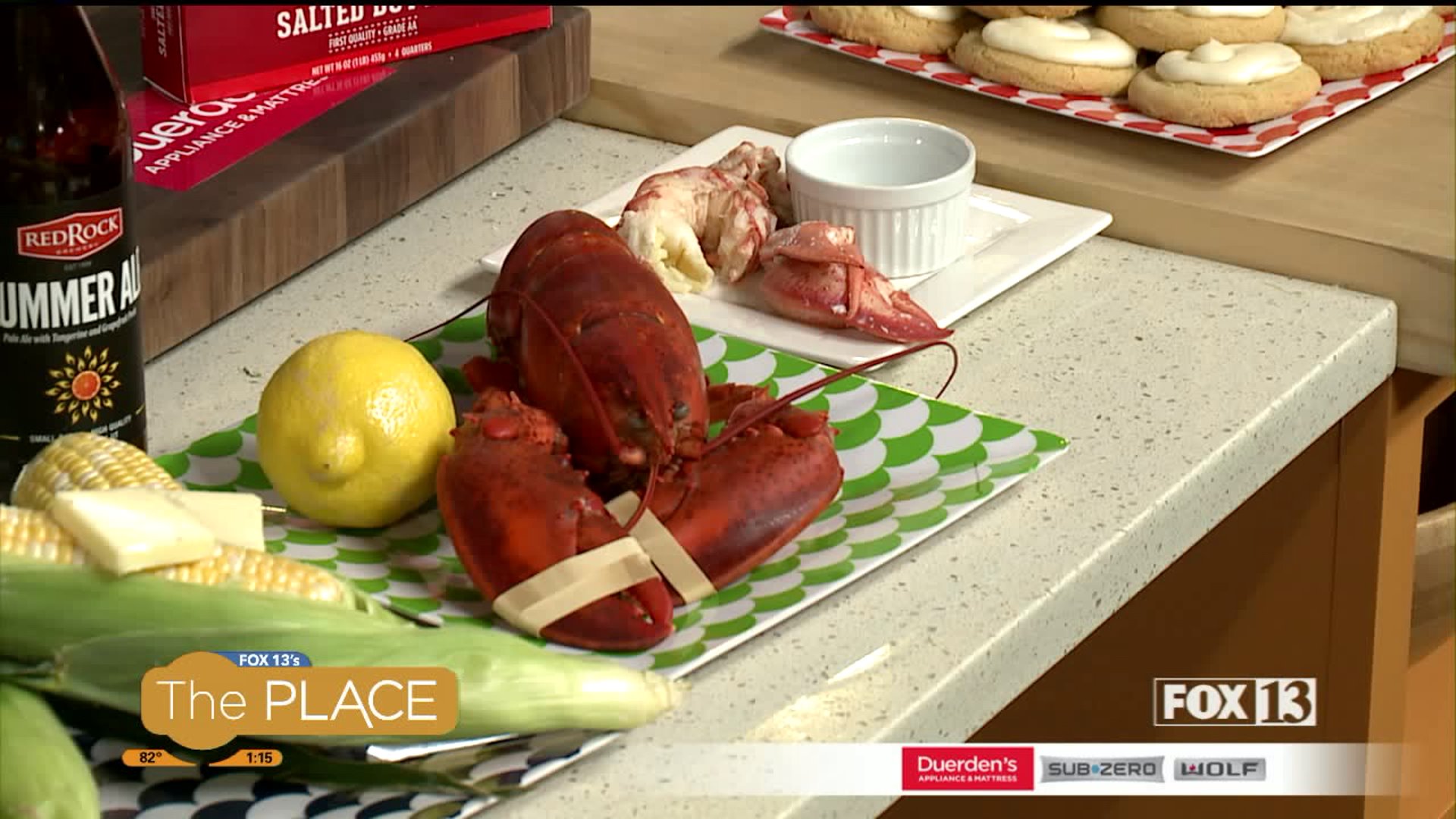 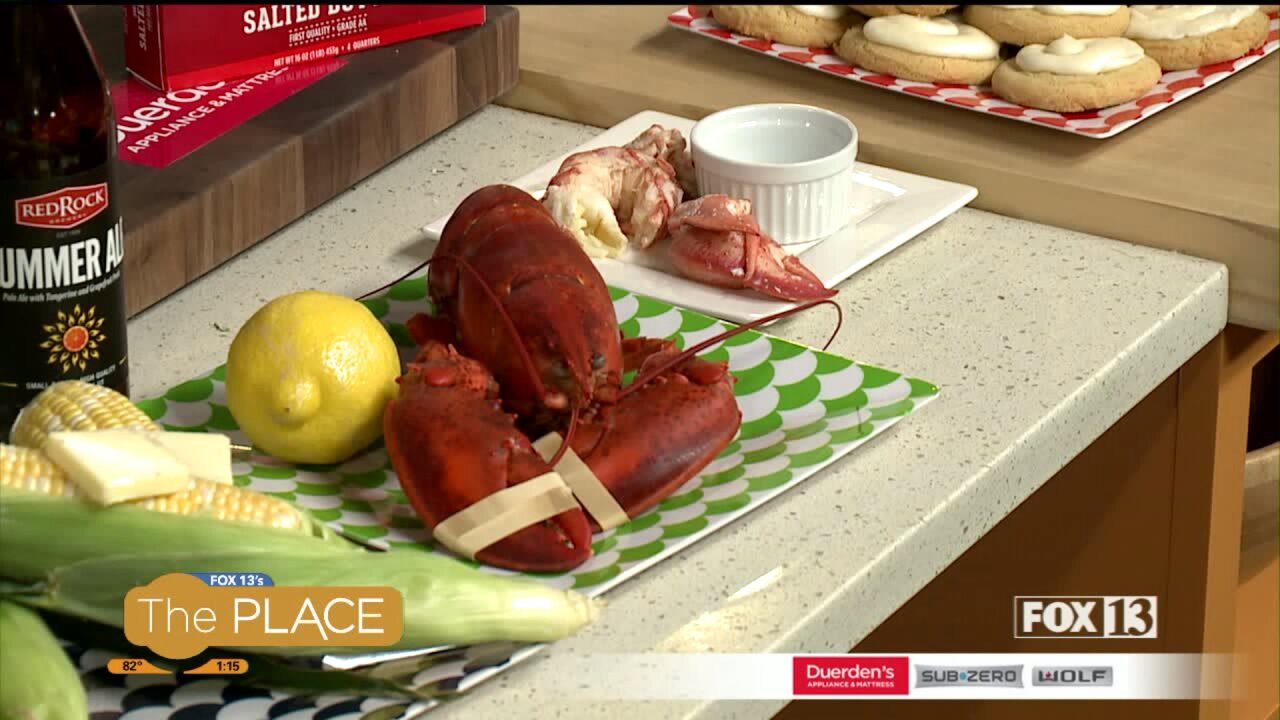 Chef Cheryl Shaefer from Harmons demonstrated how to plan and execute a classic New England Lobster Boil and Clam Bake! This is what they do back east for the 4th of July, so she's bringing a little New England tradition to Utah.

Procedure:
1. In a very large stockpot, bring water, beer, salt and lemon slices to a full rolling boil.
2. Carefully drop lobsters in, only cooking two at a time, head first with their tail turned away from you so they don`t splash you with hot water.
3. As soon as you drop the lobster in the pot, place a lid on the pot to bring the water back to a boil quickly.
4. Set timer for 10 minutes. *Note, cooking times vary by size of the lobster.
5. Once the timer goes off, remove lobster with tongs and allow to cool on your cutting board for a few minutes until you can touch it without burning your hands.
6. Break off the arms and remove the small walker legs.
7. Separate the tail from the body by firmly grasping lobster by the thorax and the tail. Arch backward until you hear a crack, then twist to separate the two sections of the lobster.
8. If there is tomalley in the tail, you can either eat it or wash it away using the cooking water. Likewise with roe if it is present. Many people believe these to be delicacies. The tomalley can be used to thicken soups and broths while adding lobster flavor.
9. Using the back of a large knife blade, give the claws a firm whack until the back of the blade embeds itself into the shell, but not so hard that it passes into the meat. Give the knife a twist to separate the claw shell into two sections.
10. Carefully, gently wiggle the claw thumb back and forth until it releases from the claw and slowly, separate it trying to have the cartilage come out with the thumb shell.
11. Remove meat from the open end where you cracked with a knife. Set claw meat aside.
12. Using nutcrackers or again, the back of your knife, crack the 'knuckles' or arms of the lobster. Once cracked, push meat through the larger open end of each section using a seafood fork or a chopstick.
13. Remove tail fins by bending backward until they break on the lower side. Gently give them a twist. Some of the sweetest meat on the lobster is in these fins. If there is meat in these, suck them out, biting down on the fin shell as you suck.
14. The tail meat can be easily removed by pushing using your finger or a fork from the tail end toward the large end of the tail shell. The meat should just push right out. If not, you can crack it apart instead. Lay the tail piece on its side and with the weight of your shoulders, press down on the tail until it cracks. Then using both hands with your thumbs on either side of the tail, break the tailpiece open from the underside using outward pressure.
15. Don`t throw those little legs away. They hold some delicious meat. You can either suck on each leg to try to get the meat out or better yet, use a rolling pin. Place the swimmer legs on the cutting board and with steady pressure, roll from toe to shoulder on each leg and the meat will squish out the open end at the top of the leg.
16. Dip lobster meat in melted butter and enjoy.

*Cooking times: 8 minutes for 1 lobster. Add 2 minutes for every 4 ounces increase in weight.

Procedure:
1. Bring water, beer, and salt to a boil in a 2-3 quart pot.
2. In the meantime, scrub the clams to remove any loose dirt.
3. Place clams in boiling water bath and steam until they open. This may take up to 10 minutes. Discard any clams that do not open.
4. Strain cooking liquid into a soup cup or dipping bowl, catching the dirt with cheesecloth or a damp paper towel.
5. Serve with a bowl of cooking liquid and a bowl of melted butter. Dip the clam meat into the cooking broth first to remove any dirt left in the clam, then dip into the butter and eat.