No, NPR was not trying to start a revolution 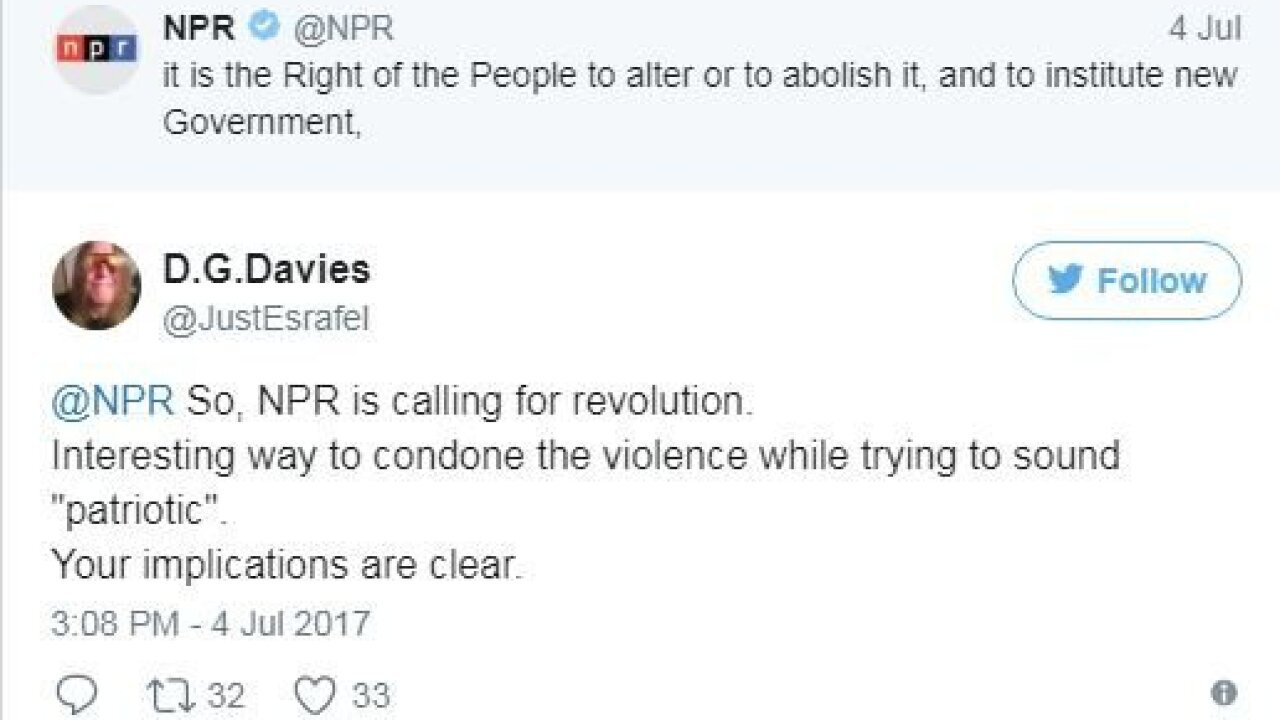 NPR tweeted the entire Declaration of Independence to mark Independence Day. Some people thought the outlet actually wanted to overthrow the government.

NPR calling for listeners to overthrow the government definitely would have made for an interesting Independence Day.

But the public radio network wasn’t calling for a revolution, and it wasn’t calling the President a tyrant. NPR was just doing what it has done for years on the Fourth of July: Reciting the Declaration of Independence.

The organization has read the historic document on the air for nearly 30 years to celebrate the holiday.

This was the first time the tradition was adapted to Twitter. NPR posted the declaration word for word. But seeing the iconic lines on a platform other than 241-year-old parchment left some users a little, well, confused.

A few people didn’t recognize the thread of 112 revolutionary tweets as one of our nation’s most influential pieces of writing. And without scrolling through NPR’s feed for context, some thought the news outlet was encouraging Americans to revolt.

“So, NPR is calling for revolution,” one user tweeted. “Interesting way to condone the violence while trying to sound ‘patriotic.'”

Others seemed concerned the organization appeared to take a political stance. One said the NPR journalists had a “mission,” and another designated them as “fake news.”

“Please stop,” one person commented. “This is not the right place.”

Another tweeted that NPR was pushing out propaganda.

And one user just thought the barrage of tweets meant NPR was hacked.

At least a couple of replies called for NPR to lose its funding. One responded, “Literally no one is going to read 5000 tweets about this trash.” (The next morning, several people made donations to NPR in his name.)

By Wednesday, most people had realized their mistake and deleted their comments. The woman who told NPR that it was “not the right place” appears to have deleted her account.

One user decided to keep his tweet up and later apologized.

“I won’t delete it,” he wrote. “If my stupidity spurns us to READ our Declaration of Independence then I don’t mind the comments.”