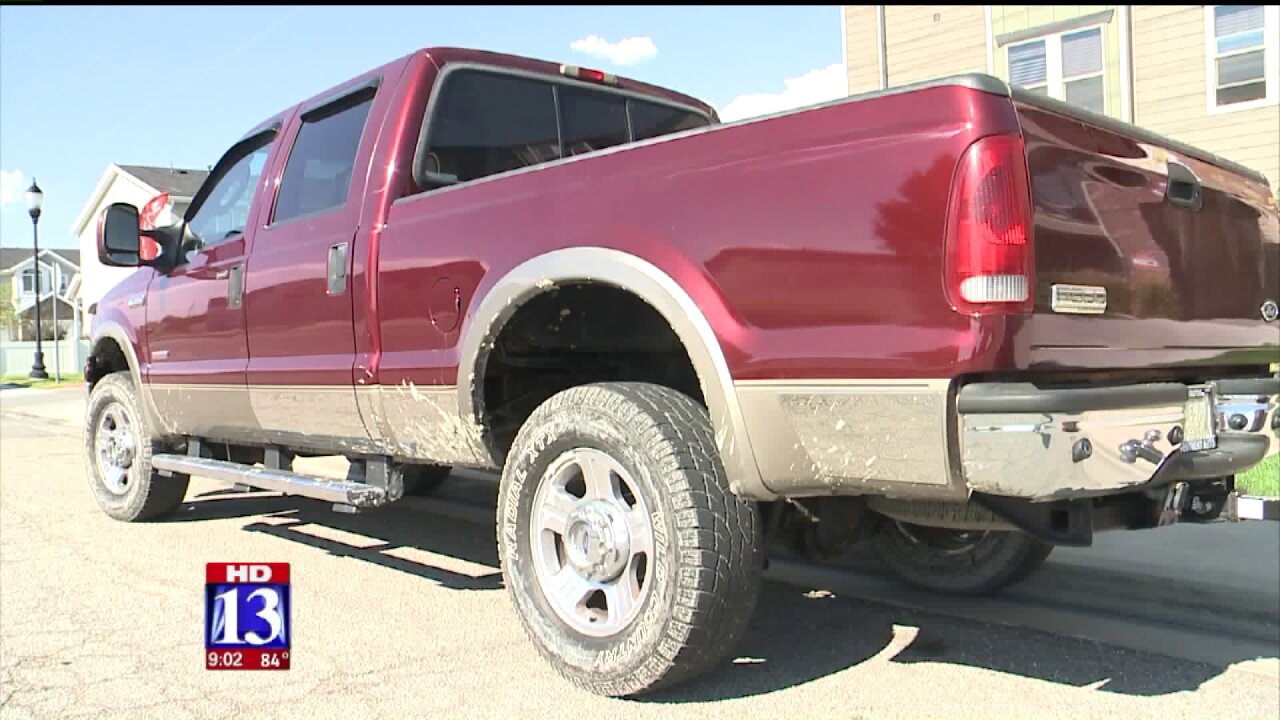 TOOELE COUNTY, Utah -- Two brothers said they never expected one of their trucks would be used in a high-speed chase, but that is exactly what happened Sunday morning.

William Harvey O'Briant III and Joshua Allen Jones were driving on I-80 Sunday morning; they celebrated their brother's 21st birthday in Wendover the night before and were expecting a quiet ride back into the Salt Lake Valley.

On their way, they saw a red SUV stuck in the clay. They said they stopped to help these women when they heard a loud bang.

"We turn around and you see a big poof of dust and a car is on its side," O'Briant said.

One of the women said she had medical training and suggested they all go help the victims in the crash, which they estimated was a quarter-mile away. When they got there, O'Briant said he called 911, but the man and woman from the crashed Mazda did not seem too keen on the idea.

"They were trying to separate themselves from the situation, it seemed," O'Briant recalled. "Like me calling 911 to get them help, they were like, 'Oh no, we already got help coming.' They seemed a little fidgety."

A Utah Highway Patrol Trooper showed up to the scene soon after and quickly discovered the man and woman, 28-year-old Tommy Rodriguez of West Valley City and 32-year-old Brady Willes of Kearns, had stolen the vehicle.

"It went from we just thought it was something innocent, you know, maybe he was drunk or something to like a whole new level real fast," O'Briant said.

He said the trooper handcuffed Rodriguez, but Willes started to walk back to O'Briant's truck, where the pair had put some of the suspect's personal belongings prior to police arriving. The trooper drew his gun and ordered Willes to get on the ground. Jones said everyone, his brother and himself included, dropped.

The trooper was able to cuff the two suspects. He put Rodriguez in the back seat of the cruiser behind the cage. Because it is designed for a single person, he had to put Willes in the passenger seat.

At this time, O'Briant said the trooper asked if the brothers could help take the personal items out of the truck. Jones said they spotted some aluminum foil and alerted the trooper, who decided to get gloves before sorting through everything. As he turned back to his cruiser, it was speeding away.

O'Briant said the trooper looked surprised, and he immediately offered up his truck. The trooper hopped in and took off after the pair, almost catching up before they decided to ditch the vehicle and make a run for it.

Trooper Evan Kirby said the two ran across the salt flats, jumped some train tracks, but did not make it far before a Search and Rescue aircarft spotted them, still handcuffed in the desert.

"So this ended like they often do with a medical situation, where they end up giving up without very much time," Kirby said.

O'Briant described it all as "surreal" and "awesome." He said the decision to hand over his truck to the trooper was a no-brainer.

"I love cops," he said, adding they have very difficult jobs and he was just doing what he could to help.

Kirby said troopers were very thankful for all responding agencies, as well as these brothers, who he said were "just really good people that were out just to help anybody.”

Rodriguez was suffering from a minor breathing issue, so he was taken to a hospital in Tooele. Police say the breathing issue was “potentially from asthma, drug use, or the crash.”

Willes was also taken to the hospital to be checked out as a precaution. Kirby said it is common for pursuits in the west desert of Tooele County to end in a medical situation due to the heat and harsh conditions. Both suspects are expected to be OK.