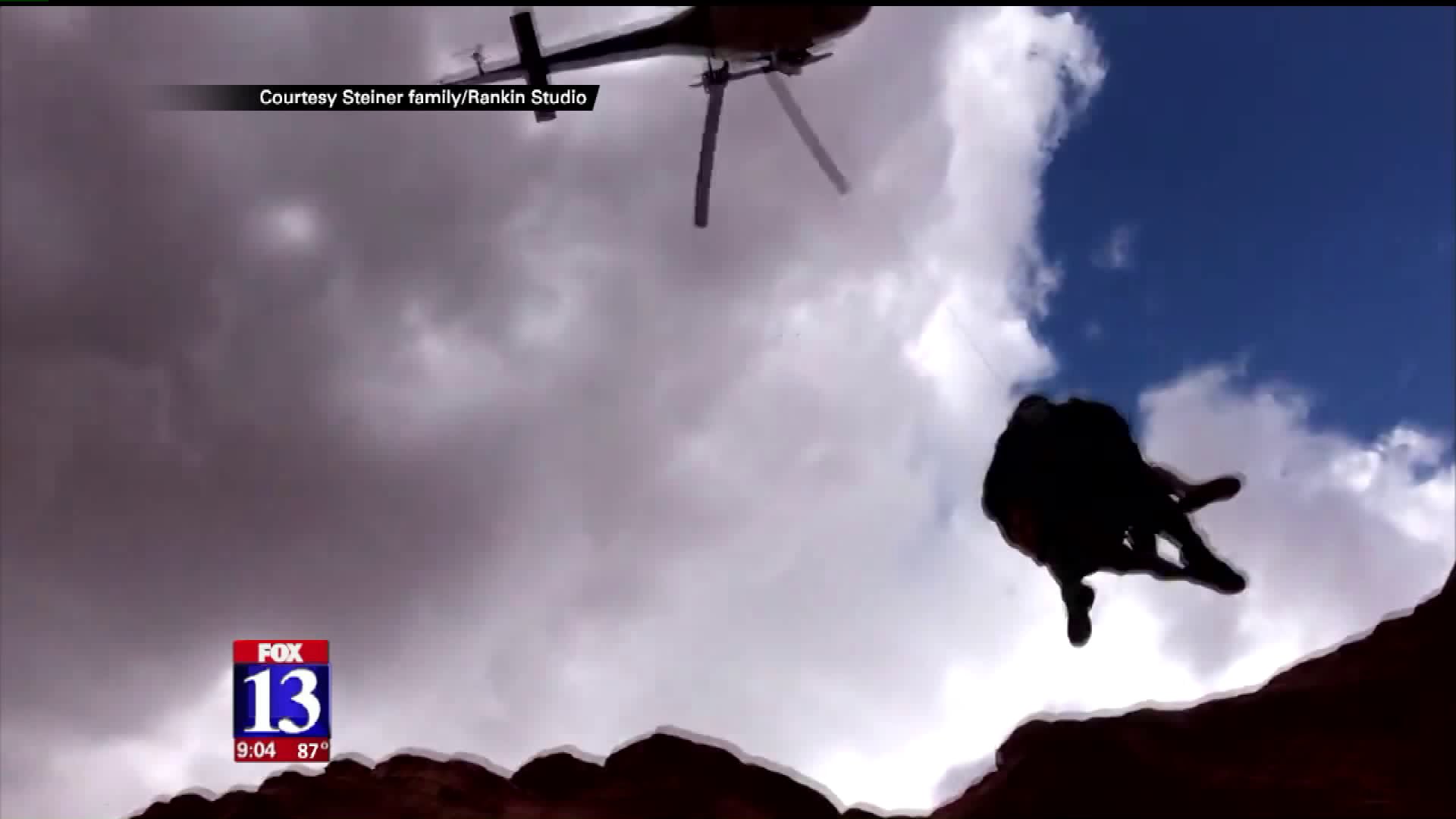 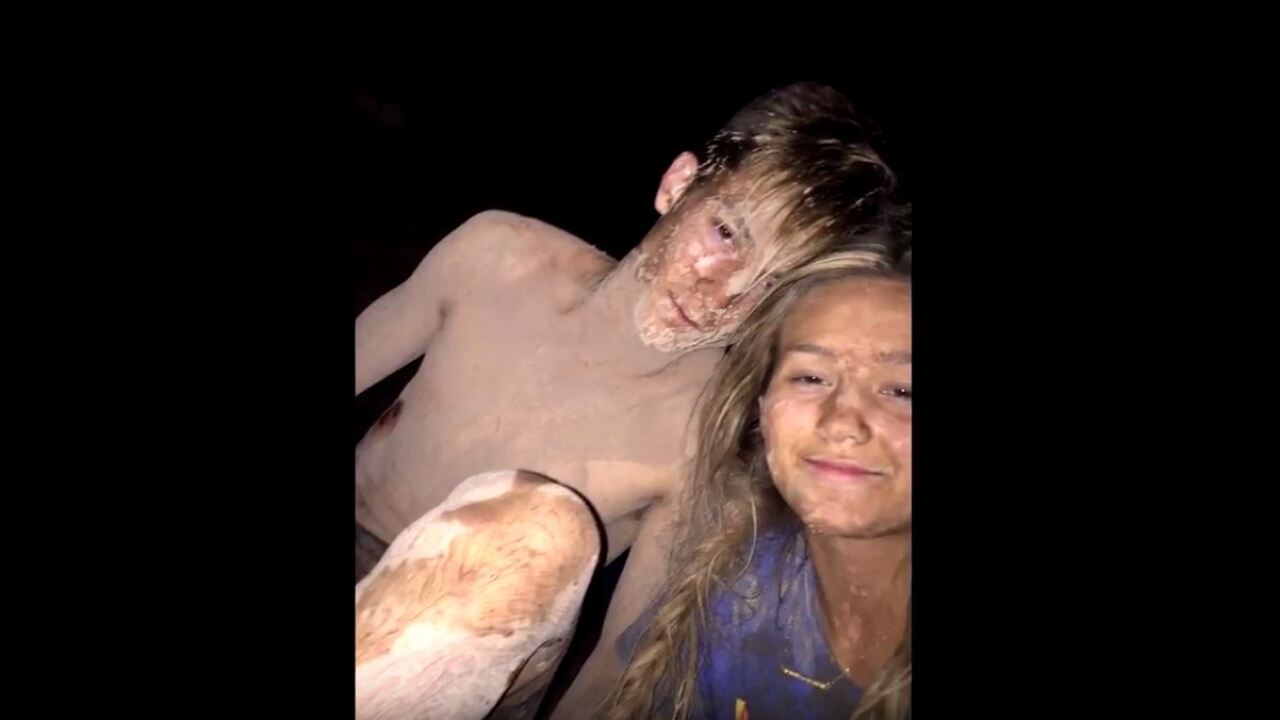 KANE COUNTY, Utah -- A group of hikers say they are "extremely lucky" to be alive after a flash flood came roaring down the slot canyon they were camping in during a 5-day excursion in southern Utah.

The group of seven included Leif Steiner, his girlfriend, his two children and some family friends, and most of the group is from Colorado. They shared their story with David Rankin in the YouTube video below, which Fox 13 has shared with their permission.

Steiner said they have been coming to Buckskin Gulch in Kane County for many years, and he describes their group as having "tremendous" experience in the outdoors.

“We did check the weather forecast, and obviously during this time of year you never know what’s gonna happen but the forecast looked about as good as it can get," Steiner said.

The group set up camp near the Middle Route area of Buckskin Gulch after hiking most of the day on July 29, choosing a spot where the canyon widened.

“Prior to that spot it’s like a narrow hallway that goes up for, I don’t know, 100 feet or more, and if a flood comes through there you’re just getting washed out," Steiner said. "There’s nothing to hold on to, nothing to stand on: It’s just a freight train of water coming through the canyon.”

Steiner said it was clear floods can happen in this canyon.

“There’s all sorts of evidence of previous floods through there, you see logs and debris jammed up sometimes 100 feet above the canyon floor," he said.

The group set up camp, and several members went up on a ledge to relax and cook some food.

The group said the weather seemed perfect, without a hint that something was wrong. Pyrenee Steiner, Leif's daughter, said she thought she would see rain before a flash flood hit.

"But just, it was completely sunny, like, such a beautiful day," she said. "And when the flood came it wasn’t raining, nothing was happening: it was just water."

“We had probably 10 seconds to scramble up the rock, " she said. "No matter how prepared you are, it doesn’t matter, like, we were extremely lucky.”

Pyrenee was already asleep in her tent when the flood hit, her tent was the first of the group in the path of the wall of water. Her brother, Reinhold Steiner, says he was just preparing to go to sleep himself when the water came crashing down on them.

“I was dead asleep in the tent, he was just about to go to bed," Pyrenee said. "He sees the water and starts screaming at me, and by the time that the water had come, I was already, I woke up completely under water. He grabbed me, pulled me out of the tent, and essentially saved me from the water otherwise I would have been dragged down.”

Reinhold said he was drifting off to sleep and was only half awake when he heard someone in their group telling him to get up, and that's when he saw the water rush around the corner into the area where they were camping.

"...So I jumped over my sister, unzipped the tent, stood up, and by that point the water had already reached us," he said.

He acted quickly to help his sibling.

“She got pulled under the water, so since the tent was already unzipped all the way, I grabbed the door of the main part of tent and started ripping [to create] more room for her to escape if need be," he said. "After that it was pretty much just water pushing on me until I was downstream."

Reinhold had already removed his contact lenses for the night and said he couldn't see clearly, and due to the pressure of the water he couldn't put his feet down or do much to resist. His family estimates he was swept about 75 feet downstream.

He said the experience was unlike anything he'd ever encountered.

“I don’t really have anything else to relate it to… it’s just a lot of pressure on your body, you can’t even stand up in it," he said. "It will sweep you away no matter what you’re trying to do.”

Leif Steiner said the flash flood was amplified by the narrow canyons around them, but even in the wider area where they camped there was still four feet of water covering the canyon floor, making it unsafe for them to leave the high ground.

He said if his son hadn't managed to grab hold of something before the canyon narrowed again, he may have been taken by the water.

“He got washed down right in front, right back to that mouth," he said. "If he couldn’t grab ground there, he would have been washed for miles.”

Meanwhile, up on the ledge the others were becoming aware of the danger they were in. Several members had fallen asleep up there and woke to a scene of chaos.

“The first thing I saw was Pyrenee coming up covered in mud and screaming, “I don’t know where Reinhold is, go find Reinhold,'" said Cynta Hritz, another member of the group. "And I went and grabbed my tent and grabbed my bag… I had my beacon, my first aid kit and some other important stuff that we needed, including food and water.”

Leif Steiner said he injured his feet as they scrambled to get to high ground.

“That’s when I ran into some rocks, broke some toes, dislocated a toe," he said. "And I was able to get on high ground, meanwhile people are screaming for each other, it was getting dark.”

Billy King, another member of the group, described the chaos:

“It’s a pretty steep incline coming up the rock we ended up making camp on, so [Leif] comes up and just falls and says ‘My feet are broken,'" he recalled. "And then the next person I saw was Pyrenee coming up covered in water yelling that Reinhold got taken down the flood, so then I went down and started looking, saw him get to the other side and then just started yelling for him to climb forward and climb high.”

Hritz  said she used the beacon she recovered from their gear to call for help.

“I immediately grabbed my beacon, my personal locator beacon, and went to the top, to the widest mouth of the canyon and set it off hoping maybe it would send off a signal," she said.

After escaping the water, the group was still stranded on high ground with an injured member.

“Well, we didn’t necessarily know we were going to get out of it until we heard the helicopter," Channing said. "And even then, we didn’t know until we were like helicoptered out.”

The group began going over contingency plans and figuring out how much food and water they had left after much of their gear was swept away. They planned for the worst and used their sleeping mats to form crosses in the hope a rescuer might see them from above. They said they knew they would not be able to go up out of the canyon and trek out, as they faced a journey across open desert.

“I think our main factor was we needed to get [dad] out of the canyon because of his feet," Pyrenee said. "We were all confident that at some point we could hike out, but we were like, there is no way he can hike out."

The group even considered making a raft out of their sleeping pads to try to float Leif down and out of the gulch. Instead, they stayed put and huddled together.

The group stayed in a 30-by-30 foot area, together and safe from the water. Fortunately, the signal from the personal locator beacon was received. A press release from Kane County Sheriff's Office states they received the distress beacon call and responded.

The morning after the flood, search and rescue units supported by the Kane County Sheriff's Office and a Utah Department of Public Safety helicopter arrived and used a hoist to air-lift the group out of the canyon.

The press release states the group had minor injuries, including some possible broken toes. The hikers were transported to Page, Arizona.

“I would like to thank the Kane County Search and Rescue," Hritz said. "They are incredible and mainly volunteer-based and were so great in getting us out and being like being really supportive and kind and really, really wonderful."

Hritz also said "having a personal locator beacon is probably what saved us and is the only reason search and rescue came."

Leif Steiner said everyone who came to their aid was helpful and generous, which they are grateful for.

“Right now we are staying in the house of the EMT who drove us out in the ambulance, so, kudos to Page, Arizona and Kane County, Utah for their incredible, I mean, four different agencies… Everyone was incredibly organized and generous," he said.

Rankin, who predicts, tracks and films flash floods, says it's best to avoid slot canyons during the southwest monsoon season. He said to remember to check the weather forecast for the entire region, and not just the canyon you will be in.

He recommends exiting such canyons by late morning and says it is a good idea to bring along a personal locator beacon and a NOAA weather radio.