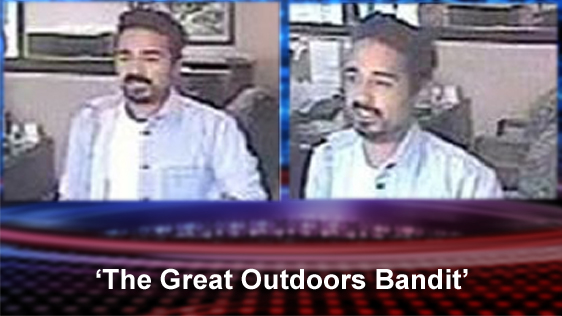 SALT LAKE CITY — The FBI is offering a $10,000 reward for information leading to the arrest and conviction of a bank robbery suspect they’ve dubbed “The Great Outdoors Bandit.”

The man is wanted in connection with seven bank robberies: six in Idaho and one in Utah (see below). The suspect (pictured above) was described as a man between the ages of 30 and 50, 5 feet 4 inches to 5 feet 6 inches tall, 140 to 160 pounds, skinny build, medium complexion, black hair and possibly Hispanic, Native American or Middle Eastern.

According to the FBI, the suspect wore large black sunglasses, a blue baseball hat and a plaid shirt during robberies committed on August 7. The suspect was seen in a black crossover SUV, possibly a Mitsubishi Outlander, with a chrome or silver rack on its top and a Utah license plate, the FBI said.

Most recently, “the unknown suspect unsuccessfully tried to exchange cash for smaller bills. He was not wearing a disguise,” according to the FBI.

“The Great Outdoors Bandit” is wanted in connection with the following robberies:

Anyone with information on any of these robberies is urged to call the FBI’s toll-free tip line at 833-291-4306. Tips are also accepted at tips.fbi.gov