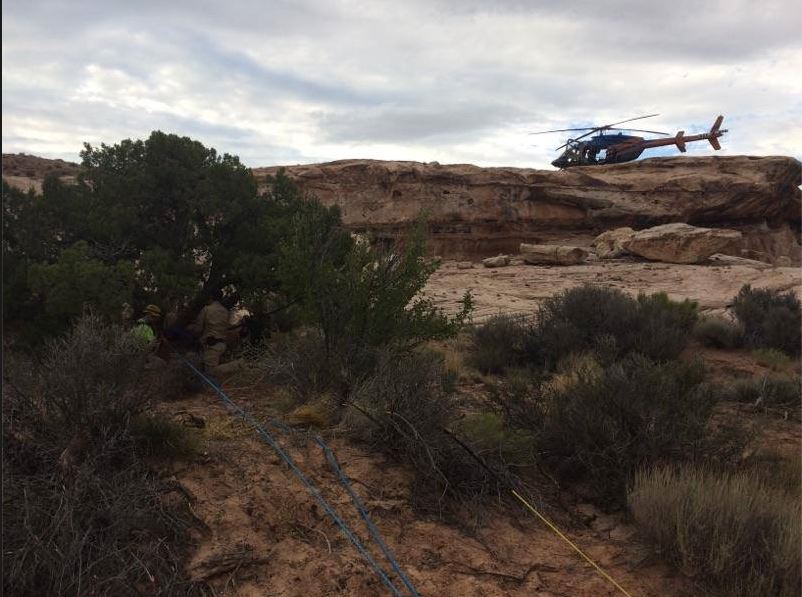 EMERY COUNTY, Utah — A Salt Lake County woman is recovering in an ICU after a nearly 12-hour ordeal where she was”wedged in and suspended” in a canyon in the San Rafael Desert.

According to the Emery County Sheriff’s Office, a man called dispatch around 4:30 p.m. Wednesday to report his 24-year-old wife was stuck in Zero Gravity Canyon, a narrow slot canyon in Emery County.

The man reported he’d spent nearly two hours trying to free his wife without success before hiking out to get a cell signal and call for help. Emery County Search and Rescue responded along with a Department of Public Safety helicopter and another helicopter from Classic Air out of Vernal.

The first rescuer was able to make verbal contact with the woman, who was extremely distraught, in pain and having difficulty breathing “due to being wedged in.” Only one crew member was small enough to be lowered down into the canyon and reach the area where the woman was trapped.

She was wearing a harness, so rescuers decided to try and pull her out from above. That effort caused more pain.

Another rescuer was able to get below the woman and touch her feet–giving her something to push against as others pulled from above. This caused further pain and made breathing more difficult for the woman, so rescuers called for more help and re-evaluated.

Eventually crews set more anchors to establish a haul line above the woman while others pulled from the side in a “see saw motion” to try to free her.

“Additionally, a gallon of dish soap was poured around the woman, a technique that had been successful in a prior rescue in the same general area,” the sheriff’s office states.

One rescuer spent about 7 hours in the canyon on a rope, and eventually crews were able to pull the woman up far enough to equip her with a better harness and extract her from the canyon.

The woman was loaded into the helicopter at about 2 a.m. Thursday, about 12 hours after she first became trapped.

The woman was taken to a trauma center for treatment, and she remained in the ICU as of Thursday night. The sheriff’s office thanked Classic Air for their
“phenomenal patient care” and assistance with the rope rescue.

“This unfortunate event is a good time to remind those visiting the San Rafael Desert to do thorough research on the areas you intend to hike,” Emery County Sheriff’s Office states. “Some canyons come with size restrictions, including Zero Gravity. This is the second rescue this summer in Zero Gravity, and the first one was within 4 feet of the location of this rescue. What started out as a day hike for this couple became a dangerous rescue mission for all involved.”