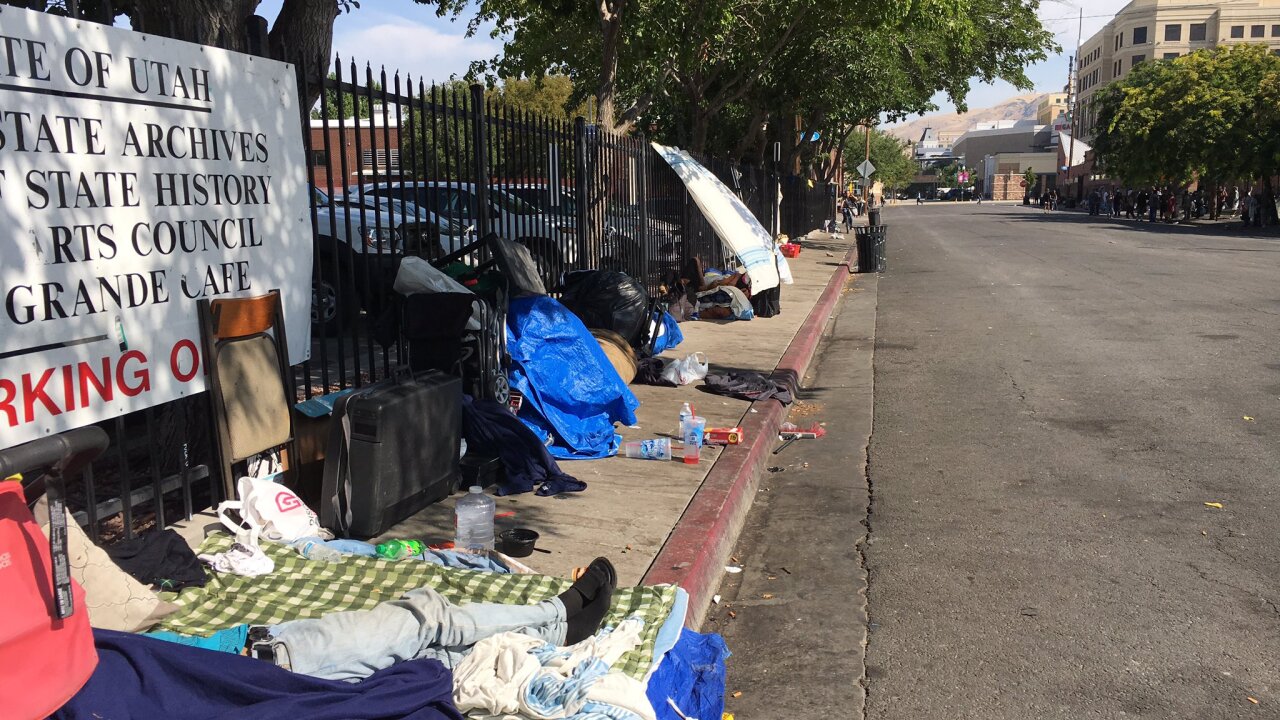 Rio Grande Street as police clear it out as part of a crackdown on crime. (Photo by Ben Winslow, FOX 13 News)

In back-to-back meetings with Democrats and his own Republican party, Hughes met with House members on Capitol Hill to sell them on the successes of the massive law enforcement blitz under way. People experiencing homelessness feel safer in the downtown neighborhood, he said, and they believe criminals who preyed on them are scattering.

"We think we’re going to be separating the drug lords, the drug mules from those that are in need," he told the House Minority Caucus as they lunched.

At the House Majority Caucus, Speaker Hughes, R-Draper, told his colleagues 491 people had been arrested for drugs and warrants since the operation began last week.

In the House Minority Caucus, Rep. Angela Romero, D-Salt Lake City, had some pointed questions about the operation. Her westside district has been reporting an increase in people camping along North Temple and other places.

"We are getting a lot of pressure from our constituents who say, 'Why do we feel everyone’s moving west? What’s going on in our parks?'" she said.

Hughes promised to attend a community meeting on Friday to answer residents' questions. Cox noted a lot of people had the perception that any sign of camping or crime was a result of Operation Rio Grande.

"There are a large amount of people out there who literally think there was no crime and homelessness anywhere in the state until Operation Rio Grande started," the Lt. Governor said.

A woman sleeps on the street as another is arrested during "Operation Rio Grande." (Photo by Ben Winslow, FOX 13 News)

Lawmakers across Capitol Hill were anxious for updates on the operation with so many state resources committed to it. More than 150 police officers have maintained a round-the-clock presence in the neighborhood since the operation began. Hughes said there was now more emphasis on treatment for addictions (with beds being promised soon). The Speaker also said there would be more put into job opportunities and affordable housing.

"Are we going to be looking at additional resources?" Rep. Patrice Arent, D-Millcreek, asked.

"We’re still having the meetings so I’m not going to say the exact dollar number, but we know it’s achievable if it’s done together," Hughes replied. "County, city, state. We’ll get there."

Cox told House Republicans the issue was a statewide one, not just something Salt Lake City must handle.

"Why don't we have homeless people in Sanpete County?" he told the caucus. "Because they go to Salt Lake City."

Talking about the next steps in Operation Rio Grande, the Speaker hinted at prodding local police agencies to enforce existing ordinances against camping on the streets or impeding sidewalk access, but said before anything is done there must be an alternative for people to go to that is safe.

"These enclaves or these safe spaces for people to go, where they will truly be safe," he said.