Wildfire burning above Bountiful, residents told to be ready to evacuate on a moment’s notice

BOUNTIFUL, Utah - A wildfire is burning in the foothills above Bountiful in the area above Highland Oaks Drive.  The fire is in the Summerwood area, and police are asking anyone except emergency responders to stay clear of the area.

There are no evacuations ordered yet, but Bountiful police are telling people who live in the Summerwood area to be ready to evacuate at a moment's notice.

"We’ve sent out the reverse 911 already," Lt. Troy Killian with Bountiful Police said.  "Basically, it tells them to standby and then if we need to, we will be sending that out again telling them to evacuate, but we will also be sending up officers up there to go door to door."

The fire is burning east of the foothills and as of Tuesday night had spread to 150 acres and there is 0% containment.

"It is currently burning away from the homes," said Kim Osborn, spokesperson for the Forest Service. "We are concerned with later in the evening when we get the down-canyon winds with the fire coming back towards the houses."

Crews began fighting the fire at 5pm and will keep an eye on it overnight. 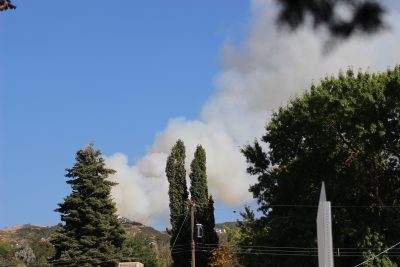