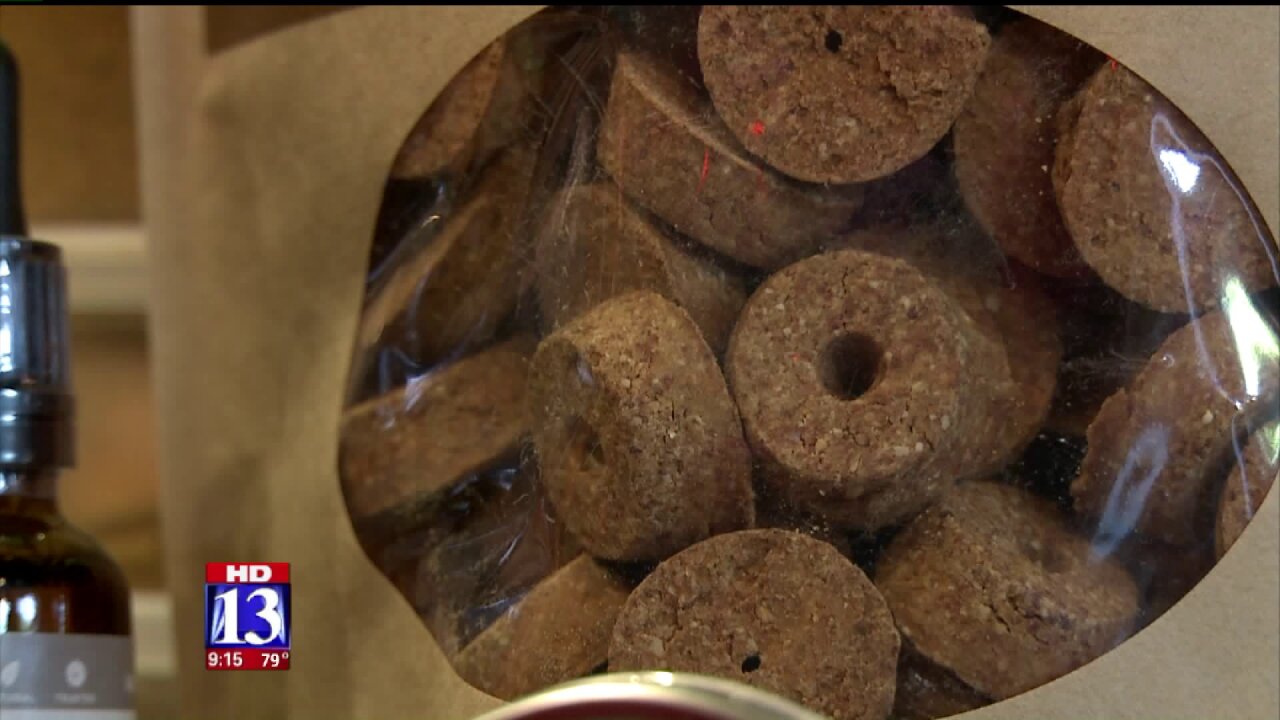 SALT LAKE CITY -- The State Department of Agriculture said Thursday it’s enforcing a ban on hemp products in animal food, and local stores said people are rushing in to stock up.

One company that is on the list to get a letter from the state to stop production said they won’t be heeding the warning, because they aren’t violating the law.

One woman came in to buy the store’s #1 selling product—Healthy Hemp Pet.

The company manufactures oils, balms and goodies for dogs and cats that contain cannabidiol (CBD), which comes from hemp.

“The orange bottle is mixed with coconut oil,” store owner Luke Shaw explained to a customer, as he showed off the Healthy Hemp oils.

He said on Thursday, he noticed a bump in inquiries on the product.

“I've received quite a few phone calls and a lot of people coming in, looking to buy a lot of it,” he explained.

Shaw said customers were worried if they’d still be able to buy the products.

The man who founded the company, Dave Merrell, said he got many of the same calls from veterinarians, customers and retailers.

“They're running to the stores to fill up,” he said, of customers.

That’s because on Wednesday, the Department of Agriculture and Food announced it would begin enforcing the ban on hemp products in pet food.

The department sent out letters Wednesday to a number of businesses—including companies that manufacture the products and stores that sell it—telling them they were violating the law.

While Desert Raw and Healthy Hemp had not received the letters by Thursday, the Department of Agriculture confirmed in a list it sent to Fox 13 that those two businesses were sent warning letters from the state.

According to the list, the state mailed out warning letters to 18 retailers and sent memorandums to seven retailers in Utah.

Warning letters were sent to five manufacturers in Utah and in other places like Texas, Washington and Canada. The list noted that one manufacturer in Colorado was sent a “notice of ineligibility for feed registration.”

“The inspection staff at the Utah Department of Agriculture and Food have found that there are animal feed products containing hemp and hemp derivatives in your store,” the letter reads.

It later states, “you are in violation of the Utah Commercial Feed Act.”

The letter asks the business to voluntarily stop selling the products, and gives them 15 days to comply.

“This is an unapproved feed ingredient that is going into these products,” said Robert Hougaard, the director of Plant Industry and Conservation.

He said hemp has not been scientifically studied for its effects on animals, and because of that it is illegal to put into products classified as ‘pet food.’

“Pet food is anything you would feed to an animal,” he said. “Whether it’s a dog treat, or whether it's their full diet.”

He said they’ve jumped through the hoops and even repackaged their products to comply with regulations.

Healthy Hemp Pet sent their own letter to each of their retailers Thursday, stating the ban doesn’t apply to their products.

“As a responsible member of the industry we are a Proud Member of the National Animal Supplement Council and following their guidelines, consistent the both state and federal law for intended use, our product is considered a Dosage Form Animal Health Product,” the letter states.

“I will continue to sell Healthy Hemp Pet,” Shaw said, of how he’ll carry on with business at Desert Raw Holistic Pet.

Hougaard later said that any product that doesn’t claim to have nutritional value or use the terms ‘biscuit’ or ‘treat’ in its labels is not affected under the law.

He said the state will need to review Healthy Hemp Pet again for compliance.