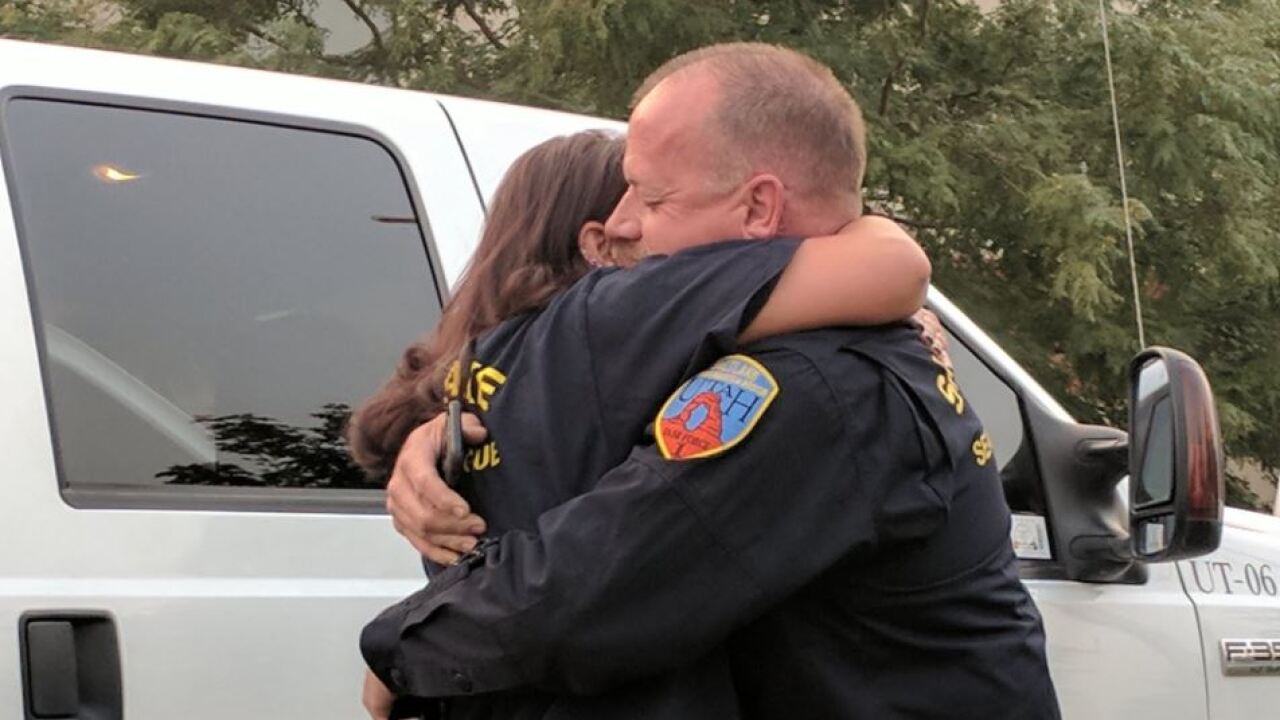 A convoy of vans, trucks towing boats, and semis with equipment arrived back at the Unified Fire Authority Logistics Warehouse in West Jordan Wednesday evening.

Outside to greet them stood fellow firefighters and wives of team members, smiling and waving.

"There he is!" said Shauna Lawrence, after spotting her husband in one of the trucks towing two boats.

She waited by the door as he stepped out.

"Hello! How are you?" Steve Lawrence asked his wife.

"Good," she replied, as the two embraced in a hug.

This was the first time Shauna had seen her husband since he was called out exactly two weeks ago.

Steve had to ditch their family vacation, instead heading to Texas to help clean up the devastation left behind by Hurricane Harvey. He was one of the more than two dozen Utah Task Force One team members sent to help out.

According to Unified Fire, the team made hundreds of rescues, saved family pets and even delivered a baby.

They lived and worked in the worst of mother nature's fury.

"It's got just ridiculous destructive powers, just to see some of the houses just fully involved or engulfed in water, some of the overpasses, the roadways," said Utah Task Force One Rescue Squad Officer Matt Rhoades.

On a normal day, Rhoades is a battalion chief for Unified Fire.

He's served on Task Force One for 13 years, he said.

Some of the biggest challenges they faced in Texas included navigating an area they'd never been to before, and finding places to launch their boats. The team often had to carry their boats to areas where they could put it in the water to make rescues, he said.

At one point, the team became trapped in severe weather that included tornadoes. He said they had to find shelter for the night and couldn't make it back to base camp.

While the work was nonstop and grueling, he said he won't forget the people they rescued that first day.

He said the people they saved were, "They were pretty relieved. They were very, very grateful, very thankful to be evacuated from those areas."

For Lawrence, knowing her husband is a part of this life-saving team makes her proud.

"It's making a difference somewhere in somewhere else's life. And that's important," she said. "The people in Houston needed them."

While Utah Task Force One is home from Hurricane Harvey, the team says they're on standby in case FEMA calls them out again for Hurricane Irma.