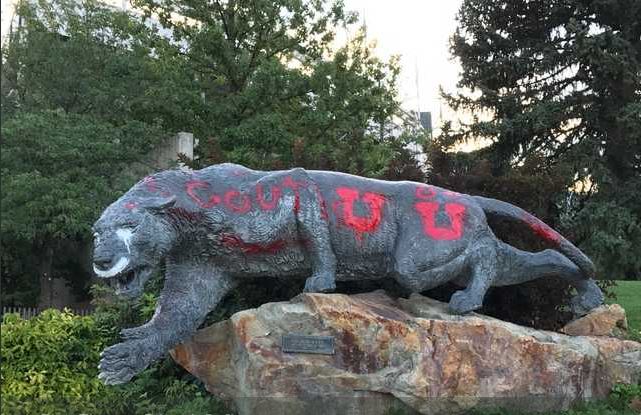 Provo police received a call from a concerned citizen around 4:50 a.m. saying there were people painting the BYU Cougar statue outside LaVell Edwards Stadium.

Provo Police responded immediately and said they were able to catch the suspects literally “red handed,” as they had paint on their hands.

The four people arrested had used red paint and stencils to vandalize the statue, both of which were found in their vehicle.

Lieutenant Steve Messick said they can’t confirm whether or not the suspects belong to the rival school, however he said they were of average student ages.

The four were cited with criminal mischief and released, police said.

Provo Police said there is a chance the school could seek restitution for the vandalism, but they are unsure of what that amount would be or if the school will pursue restitution.

BYU jumped on the cleanup and according to Provo Police it is now cleaned up. They are unsure, however, if it is ‘good as new’ or if it will need future treatments or cleanings.

Tom Holmoe, BYU’s Director of Athletics, tweeted a photo showing the statue post clean-up. Drew Troutner tweeted two photos, one showing the vandalism and a second showing the clean up as it was underway.

I can confirm that this is a completely legit photo. Did BYU seriously not wrap up the statues this year? pic.twitter.com/adPnVHsp9I