UTAH COUNTY, Utah - A licensed marriage and family therapist has been arrested for allegedly sexually abusing an underage girl in Utah County.

Until recently, Calder worked at a youth treatment center in Utah County.

Officials would not confirm the specific treatment center.

One of his former patients, a 16-year-old girl, told her new therapist Calder had sexually abused her multiple times from March 2017 through June 2017.

"He's brought on to work in these facilities as a counselor and a therapist.  He's in a position of trust,” said Lt. Eric Knutzen with the Utah County Sheriff’s Office.  "He's there to help whatever issue it is the person is dealing with and to provide some sort of council, not to overstep and take advantage a victim."

"We did a search warrant on his house up in Bountiful, found some evidence that kind of corroborated what was said by our victim,” said Lt. Knutzen.

The victim said the alleged abuse happened during scheduled therapy sessions with Calder when she was a resident in the inpatient youth treatment facility where Calder worked.

The Utah County Sheriff's Office said Calder had most recently been working at a residential treatment center in Salt Lake County.

Officials did not confirm which facility but said his employment there was terminated.

Detectives said they would like to hear from anyone who believes they may have been abused by Calder, or if anyone knows of someone who might have been victimized by Calder.

However, the webpage states it has not been updated since 2007. 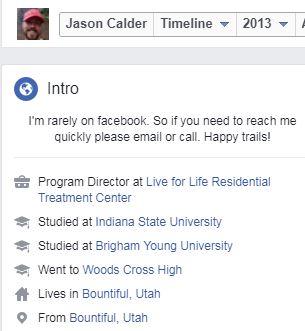 According to what appears to be Calder's Facebook page, he attended Woods Cross High, Brigham Young University and Indiana State University.

The page also states he is a program director at Live for Life Residential Treatment Center in West Jordan and started in June 2017.

NewHavenrtc.com, which lists Calder as an employee, states it has locations in Spanish Fork and Saratoga Springs.

Jason is an award-winning psychotherapist who has been in the industry since 1999, working as a front-line staff, therapist or clinician. He has experience in both a residential and wilderness environment that makes it easy to relate to the students at New Haven.  Jason chose to work at New Haven due to the program’s long-standing reputation for clinical quality and restorative relationships.  Jason gets satisfaction as he witnesses each student regain her sense of personal identity and value.

Jason has given presentations around the country to mental health professionals, physicians and families on the neurological effects of process addictions, supportive treatments for Autism Spectrum Disorders and the experiential interventions to help adolescents find greater meaning and purpose in their lives.  He has appeared on 20/20 (post-production), in The Atlantic, and his work has been featured on CNN and CBS News.

Jason was raised in Bountiful, UT where he enjoyed spending time in nature. His hobbies include canyoneering, snowboarding, reading, whitewater kayaking, cooking, backpacking, caving and spending time with his wife and daughter.

On Dec. 1, 2015, allkindsoftherapy.com reported Calder was the clinical director at Outback Therapeutic Expeditions in Lehi, Utah, and said he also ran its Unplugged program.

Calder's Facebook page states he also worked at the Summit Prepatory School in Kalispell, Montana, as assistant clinical director from Aug. 2007 to July 2014.

Previous posts on his Facebook page from 2011-2012 show him on outdoor trips with what he says is his Boy Scouts of America Varsity Troop.

He also indicates he worked as a therapist La Europa Academy in Murray, Utah, until Aug. 2007.