SALT LAKE CITY — The Salt Lake County District Attorney has ruled an officer who shot and killed a suspect who threatened officers while wielding a knife was legally justified.

Patrick Harmon, 50, was shot and killed August 13 during an incident that began with a traffic stop as Harmon was riding his bicycle in the area of 1000 South and State Street.

An officer stopped Harmon around 10 p.m. August 13 after seeing the man cross six lanes of traffic on State Street and observed his bicycle lacked the required red rear tail light.

Police say Harmon gave the officer several names before giving his true name, during which time the first officer called for backup and two officers responded. The officers determined Harmon had an existing felony arrest warrant for aggravated assault.

The officers said Harmon seemed agitated and repeatedly asked not to be taken to jail, but said he complied when asked to turn around and put his arms behind his back. However, they say he fled once his arms were behind him.

The officers say Harmon threatened to stab or cut the officers as he was fleeing, and as the officers pursued they said Harmon stopped running and turned around.

A knife found on the ground near a suspect who was shot and killed by Salt Lake City Police August 13, 2017. Image courtesy Salt Lake County District Attorney.

Officer Clinton Fox said he heard the suspect yell “I’ll F—— stab you” while holding an open knife in his hand. Fox told investigators he wasn’t sure if the other two officers could see the knife and he worried what might happen if they tried to get “hand’s on” with the suspect.

Fox fired three rounds, saying he feared Harmon might stab him or another officer.

Officer Kris Smith said he heard Harmon threaten to cut the officers and reach toward his pants with his right hand. Smith said he “fired his Taser and simultaneously heard a gunshot.”

After Harmon was shot, police say they handcuffed him and rendered aid until medical personnel arrived. Harmon suffered fatal injuries.

The DA’s letter states body camera footage shows Harmon stopping and turning toward the officers with a knife in his hand and notes officers found a knife at the scene. The letter also notes Fox’s abrupt stop and the way he is up on his toes with his back arched away from Harmon as he fired his weapon. 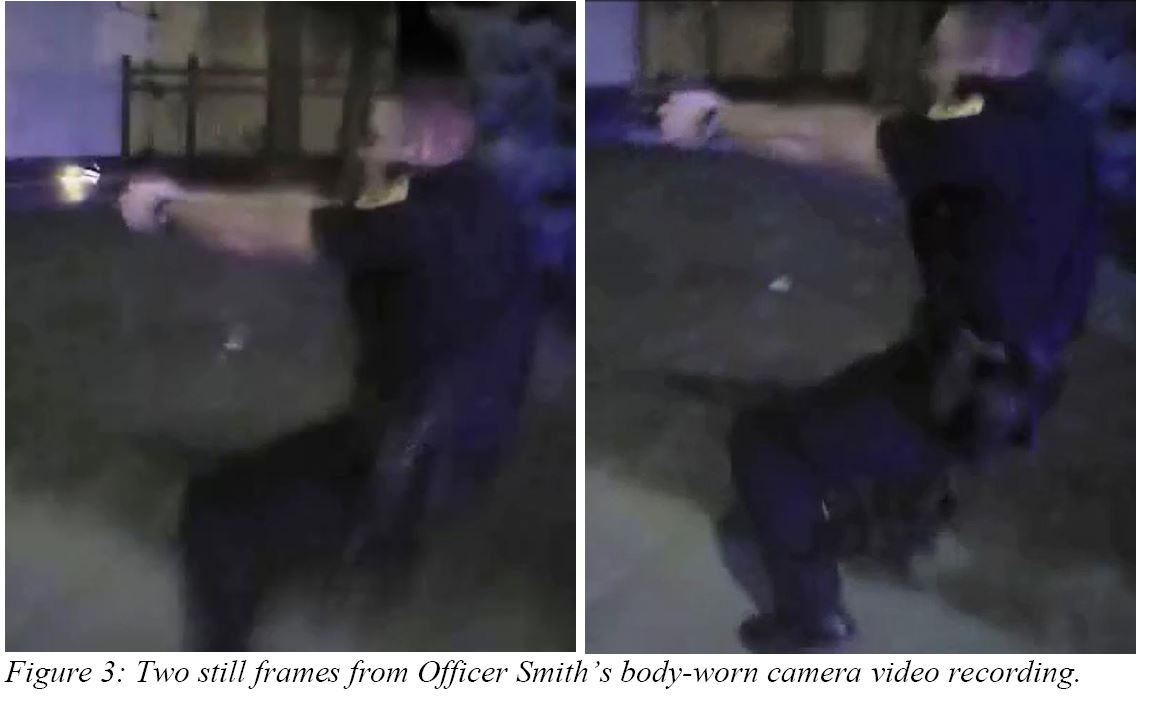 The DA states that because Harmon threatened to stab or cut the officers and turned toward them with an open knife as they ran after him, Officer Fox reasonably believed deadly force was necessary to prevent death or serious bodily injury to himself and his fellow officers.

The DA states he finds the use of deadly force in this case “justified” under Utah State Law and will not file criminal charges against Fox.