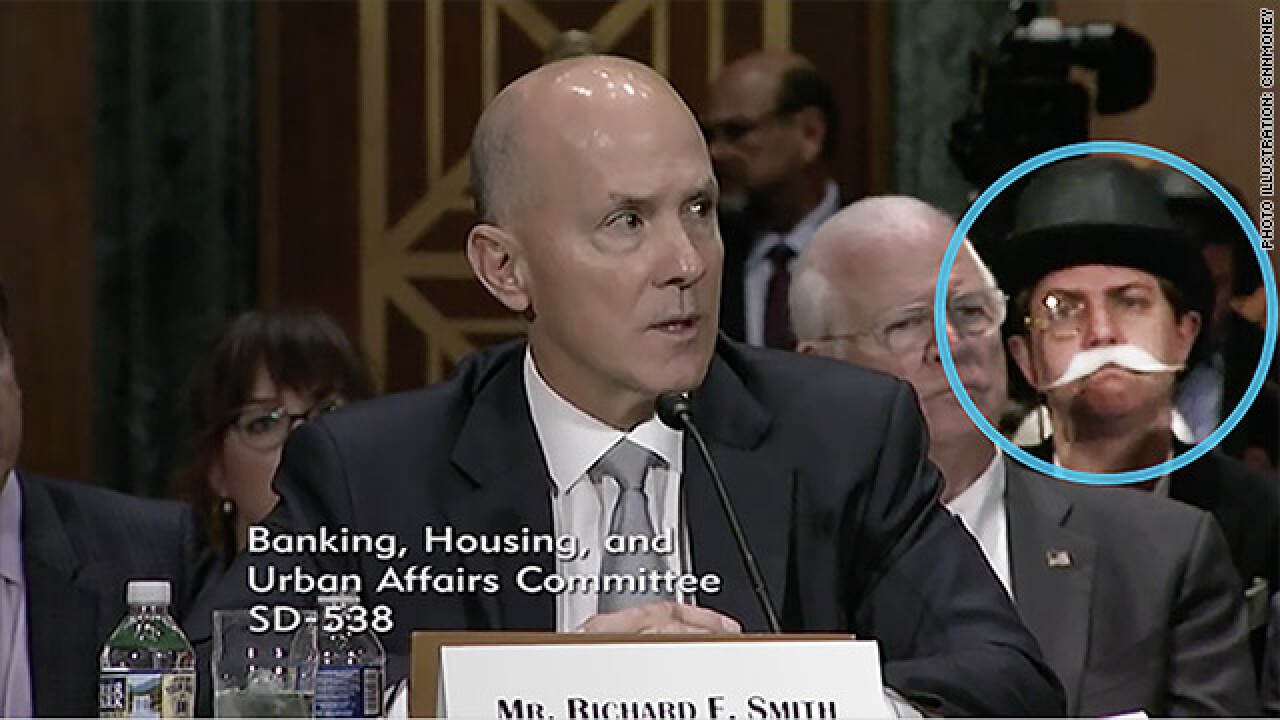 The Monopoly Man made an appearance at the Senate Banking Committee hearing on the massive Equifax data breach.

Wearing a top hat, monocle, and white mustache, the character sat directly behind former Equifax CEO Richard Smith as he testified before the committee on Wednesday.

The ruse was organized by progressive nonprofits Public Citizen and Americans for Financial Reform. The organizations want to raise awareness of Equifax’s forced arbitration clauses in their terms of service.

Amanda Werner, Campaign Manager with Americans for Financial Reform and Public Citizen, played the role of the iconic Monopoly Man on Wednesday.

“I am dressed as the Monopoly Man to call attention to Equifax and Wells Fargo’s use of forced arbitration as a get-out-of-jail-free card for massive misconduct,” Werner said in a Twitter message to CNN Tech. “They use these ripoff clauses buried in the fine print to ensure that consumers can’t join together to hold them accountable in court.”

Werner’s character attracted a lot of attention on Twitter, due in part to the selected seat right behind the former Equifax executive.

Equifax offered free credit monitoring to affected consumers. The fine print initially included an arbitration clause to prevent people from suing or joining a class-action lawsuit. It removed arbitration from its identity theft protection offering after outrage following the data breach, but still has it in other consumer products.

Smith told Senators on Wednesday that a forced arbitration clause was not designed to be applied to the breach.

Senator Sherrod Brown, a Democrat from Ohio, grilled Smith over forced arbitration in the fine print of the company’s products on Wednesday.

“I can’t understand why you think for those 145 million in that case that forced arbitration is unfair, but in other uses in your company you think it’s fair,” he said.

Senate hearings are usually open to the public, so anyone can attend. Werner said an intern arrived at 7 a.m. to save a spot in line.