SANDY, Utah -- A Sandy parent has filed a complaint with the Utah Lieutenant Governor’s Office against supporters of the Canyons School District bond.

Wendy Davis registered the complaint after learning the “Friends of the Canyons School District” had not registered with the state as a political issues committee.

“I became aware of the Friends of the Canyons School District when I received a mailer last week,” Davis said. “I had not heard of them before, tried to find out who they are. I think they have the ability to affect the outcome of this election with this marketing campaign.”

The Friends of the Canyons School District is a group made up of parents who support the bond and it has created mailers, yard signs and a billboard.

“The way we were reading the statute we thought we were good because we are just parent volunteers and we didn’t need to file anything,” said Brad Snow, a member of the Friends of the Canyons School District.

Snow registered the group as a political issues committee with the state as soon as he learned it was required.

“The bond is a good thing,” Snow said. “It is tax neutral, and it will do nothing but good for the students and the teachers.”

The Lieutenant Governor’s Office said many organizations are not aware about registering with the state and said the group could face a $100 fine if the registration or other filings are late.

The proposed $283 million bond would rebuild seven schools and renovate 26 others without raising the tax rate. Davis thinks the bond is wasteful because it includes about $4 million to expand the Corner Canyon High School.

She said the district could save money by changing the boundaries so more students would go to Alta High School or Jordan High School—and stopping students from other areas from transferring to Corner Canyon High School.

“It’s extremely irritating to me, and I think its pork-barreling quite frankly to put this particular project on this bond,” Davis said.

The Canyons School District said 58 students have transferred outside Corner Canyon High School's boundaries in the past. A moratorium is now in place to prevent other students from transferring to the school. The district added that the goal is to only have about 2,100 students at each school, and Alta, Jordan and Corner Canyon high schools are near or above that goal.

If the bond passes, Hillcrest High School will be built from designs created by a former graduate. Greta Anderson is an architect for FFKR Architects and was the only female in her drafting class at Hillcrest.

“It’s a dream come true as a high school designer,” Anderson said. ”You are redesigning your high school in your mind all the time. You know every detail of that school. You know the culture. You have had a lot of time on what can be improved or what could be designed.”

Some of the renderings for that design can be viewed below: 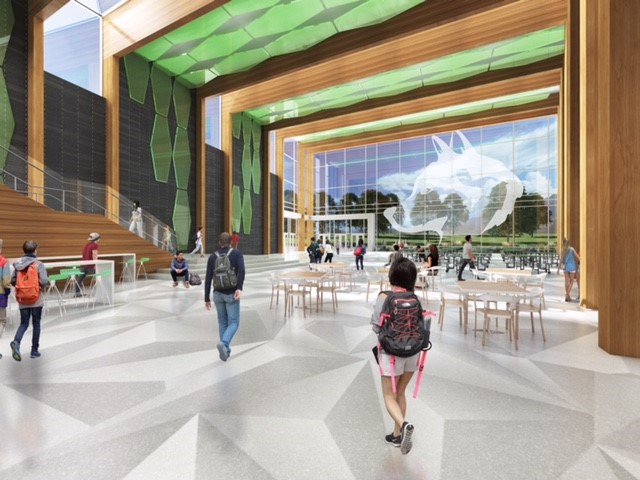 Hillcrest High School was built in 1962. The building cannot withstand an earthquake. The school’s heating and cooling system is failing and the ceilings have so many holes that rain and even bats can get inside. Most classrooms only have one or two electrical outlets, which makes it difficult for students to use computers and other technology.

Anderson said Hillcrest students deserve a school that is equipped to teach students in the 21st century.

“The school was old when I went there a very long time ago, and it really doesn’t facilitate modern learning.”

More information about the bond can be found online, here.