WASATCH COUNTY, Utah -- Several buildings have been evacuated due to a trio of brush fires near Strawberry Reservoir Sunday.

Lt. Janet Carson with Wasatch County Fire Protection said the three fires all sparked just off of Highway 40 within several miles of each other.

The fires prompted the evacuation of 26 people from eight homes as well as several hunting camps, Carson said.

She said the fires were reported around 3 p.m. Crews extinguished one of the fires, but Carson said the other two grew to an estimated 600 acres each.

Those two remaining fires, dubbed the Trout Creek Fire and the Soldier Creek Fire, are 0% contained as of Monday.

Eldon Minchey owns a cabin in the area and said he was staying there to deer hunt, when authorities told him to evacuate.

"They didn't have much time," he said. "For our own good, we needed to get out."

He said he packed everything up and quickly left.

"Got all of our equipment out down here. So, the Sheriff followed us out. We had to leave," he said.

Carson said winds proved to be a big challenge in fighting the flames.

"The wind has changed direction several times and we've had to move crews to different areas to keep them safe," she said.

Aside from evacuating residents, she said crews had to track down all the hunting camps in the area to get hunters out safely. They also had to cut power in the area, affecting nearby businesses like Daniels Summit Lodge of Highway 40.

"Second day of the big deer hunt, which is probably one of the biggest camping days of the whole year," Carson said. "Wasatch County is inundated with hunters."

Because of that, she said they had a hard time accounting for everyone at all the camps.

In the end, some hunters had to abandon camp and weren't able to bring anything with them.

"There's a big tent camp up there with all their equipment still just sitting out, because they had to pick up and leave," she said.

Carson said no structures are threatened by the fires, but they kept the evacuations in place as a precautionary measure.

Crews from several agencies including BLM, the Forest Service, and the Utah Division of Forestry, Fire and State Lands planned to stay on scene over night to continue fire fighting operations.

She said they hope the cold weather overnight will help calm the flames, and that they plan to reassess the fires Friday. 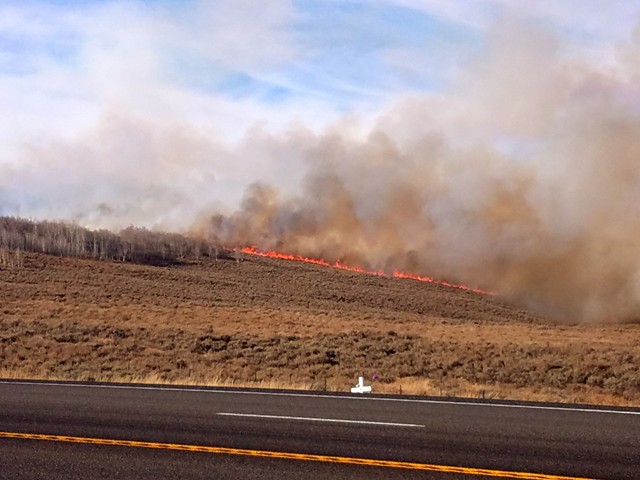