MIDVALE, Utah — Unified Police are looking for help identifying a suspect who tried to steal a bike twice and pointed a gun at the victim when confronted about the the theft attempt.

Police say the crime occurred Monday between noon and 1:30 p.m. near a nail salon located at 32 East 7200 South in Midvale.

A man wearing a baseball hat and hoodie attempted to steal a bike that was locked up in two separate attempts. During the second theft attempt the victim went outside and confronted the suspect, and police say the suspect pointed a semi-automatic handgun at the victim before fleeing.

The suspect arrived at and fled the scene in a white Dodge Grand Caravan, which had damage to the driver’s side rear bumper and a “P” (for Pittsburgh Pirates) sticker on the rear passenger side window. The van has an “In God We Trust” license plate, which is not legible in the surveillance video.

Anyone who recognizes the suspect, the passenger or the vehicle is asked to call Unified Police at 385-468-9812. 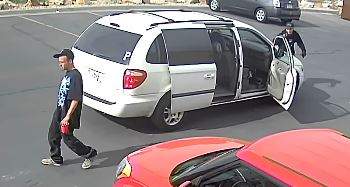