Ghost ships wash up in Japan with skeletons on board 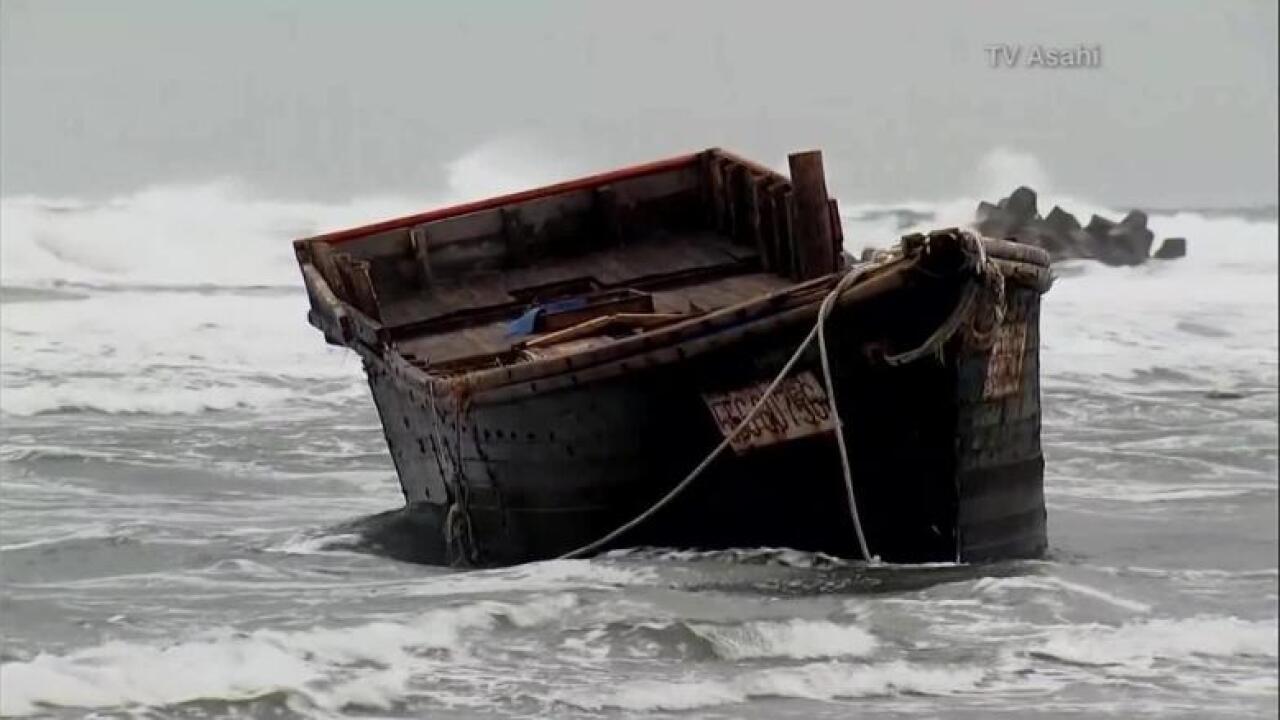 At least four ships have washed up on Japan’s west coast this month, some with bodies on board, and while authorities haven’t confirmed their origin, signs suggest they’re from North Korea.

Eight skeletons were found in the hull of one wooden boat that washed ashore on Miyazawa beach in the northwest of Japan’s main island Honshu, the Akita Coast Guard said Monday.

The unidentified boat was spotted drifting off shore on Friday but the grim discovery was only made when it reached land.

While officials would not confirm the boat was from North Korea, it matches a spate of vessels and debris that have ended up on Japan’s west coast.

Satoru Miyamoto, a professor at Seigakuin University and an expert on North Korea, said the number of ships washing ashore on Japan’s coast has risen since 2013.

“It’s after Kim Jong Un decided to expand the fisheries industry as a way of increasing revenue for the military. They are using old boats manned by the military, by people who have no knowledge about fishing,” Miyamoto said. “It will continue.”

The spate of North Korean boats washing up in Japan is reminiscent of 2015, when more than 12 so-called ghost ships were discovered with dead bodies on board.

At the time, experts said the bodies on the boats could be those of refugees or fishermen, driven into more dangerous waters by desperation from North Korea’s well-documented food shortages.

In January this year, Japanese authorities rescued 26 North Koreans from a sinking tanker off the Goto Islands, in southwest Japan. The crew were later collected by another North Korean vessel.

Several North Korean fishermen rescued earlier this month by Japanese authorities were also returned to the country, on their request, officials said, indicating that at least some of those washing up on their neighboring nation’s shores are not attempting to flee there.

There have been several high-profile defections this year however, with the most recent coming this month, when a soldier made a dramatic break across the demilitarized zone between North and South Korea, under gunfire from his former comrades.

The man’s condition, as reported by South Korean doctors, gave insight both into why people may attempt to flee the autocratic country and why fishermen may be heading out into more dangerous waters in search of bigger catches.

On treating the soldier, surnamed Oh, doctors discovered a large number and multiple forms of parasitic worms, including some as long as 27 centimeters (more than 10 inches), and found he was infected with hepatitis B.

Choi Min-ho, a professor at Seoul National University College of Medicine who specializes in parasites, told CNN the use of human fertilizer on crops and poor sanitary conditions led to the transmission of parasitic cysts in North Korea.

Intestinal worms are typically transmitted through contact with feces or unwashed hands. Infections are easily treated with drugs.

“It is a vicious cycle that is hard to stop in North Korea. They are so desperate to make ends meet that they cannot take proper preventive measures,” he said.

“Everyone was hungry, even the soldiers,” he said. “The UN is sending rice and fertilizer and it all goes to the ranking officials under (North Korean leader) Kim Jong Un. There are many soldiers who also die from disease because they’re not given medical treatment.”

North Korea suffered a devastating famine in the 1990s which killed as many as 1 million people, and the UN estimates as much as 70% of the country’s 25 million people still don’t eat a “sufficiently diverse diet.”