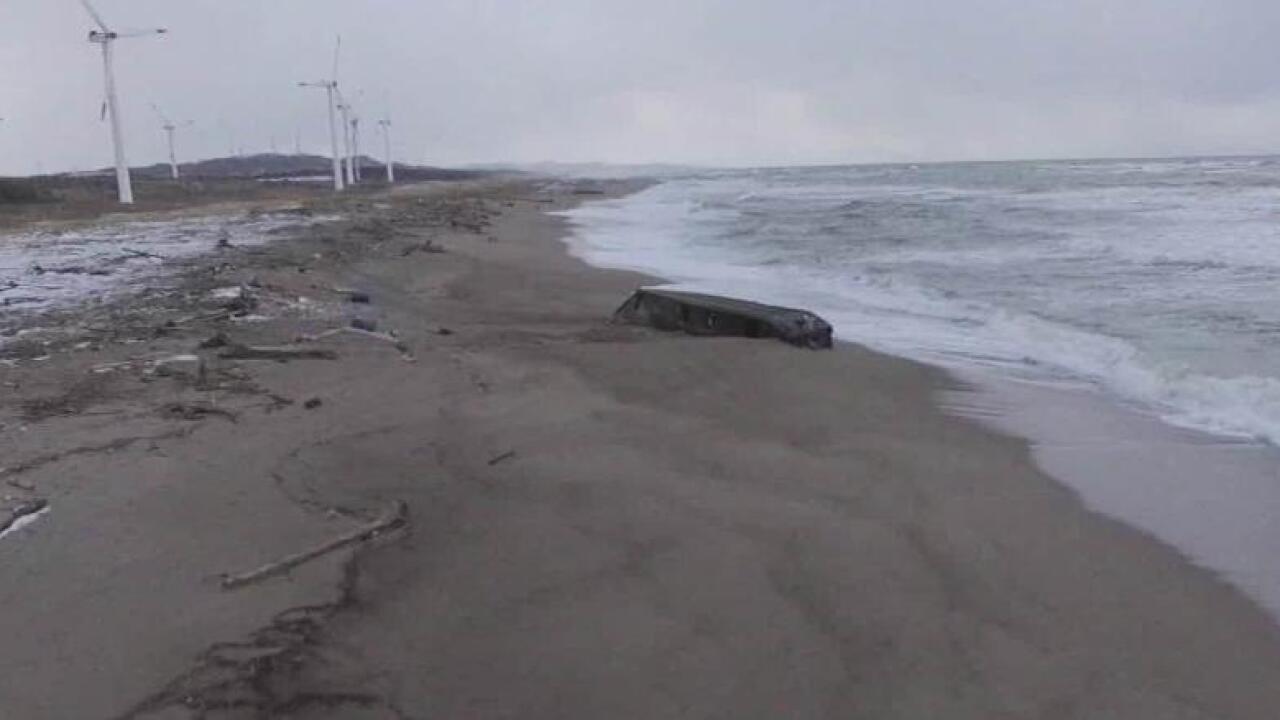 Ryosen Kojima opens a sliding door, enters the Zen Buddhist temple that his family has operated for four generations, and lights two candles.

He then kneels and performs a prayer, chanting and rhythmically sounding a bell by his side.

Lined up in front of the priest on a table are dozens of containers covered in brocade that hold the cremated ashes of the deceased.

Fifteen sets of ashes do not have name tags on them. They belong to unidentified North Koreans who have washed up dead on the shores of this sparsely-populated Japanese peninsula in recent months.

Kojima says he used to receive the remains of four or five North Koreans a year from the municipal government. This is the largest number of cremated North Koreans he has seen in 20 years.

“These people from North Korea follow a different religion from us. I take care of their ashes probably in a different manner from what they would want. They will be buried without a funeral.”

For years, North Korean boats — often dubbed “ghost ships” — have been washing up on Japanese shores.

But this year marked a record for this mysterious phenomenon. By December 18, the Japanese Coast Guard counted at least 95 North Korean boats, accompanied by at least 27 bodies. Those numbers are likely to continue rising.

Political tensions and lack of transparency from the North Korean government make it difficult to determine why so many wrecks have arrived.

One official from the Japanese Coast Guard says it could be as simple as the weather.

“Generally speaking the winter ocean in the Sea of Japan [also known as the East Sea] is very rough, and the tougher winter brings more shipwrecks,” the official added, speaking on condition of anonymity in accordance with Japanese official protocol.

Washed up on a beach

Winter is bleak and stormy on the northwestern coast of Japan.

At sunset, the easterly winds pick up speed as they race across the sea. The gusts drive breakers pounding against the shore, spin giant wind turbines, and hurl freezing rain that bites at eyes and exposed skin.

Against this forlorn backdrop, surf crashes around two large, dark pieces of debris resting in the sand a few hundred yards apart on a beach near the city of Akita.

They are ghost ships — overturned wooden fishing boats 15 to 20 feet in length, waterlogged and half buried in the sand.

According to the Japanese Coast Guard, the two boats washed up on December 13. While inspecting the wrecks, authorities found the decomposing bodies of four men. On Monday, two more bodies were found buried under a boat while city workers attempted to drag one of the wrecks off the beach.

When CNN visited the same beach earlier that day, it was eerily empty save for a lonely figure in a long coat.

Tadasu Takamine, an assistant professor at the Akita University of Art, came to pay his respects to the unnamed North Korean victims from the boats.

“I’m very sad,” he says. “There’s nobody here and no flowers around the boat.”

Takamine had a message for North Korean fishermen who may plan to go out to sea: “Don’t come. Stay there. Survive.”

The North Korean boats drifting onto Japanese beaches are ill-equipped to travel such a vast distance across open sea.

Unlike the overturned boats in Akita, a boat that washed up on a beach in Iriai beach in Oga city on December 7 was in much better condition.

There were still fishing lures and nets inside the boat, as well as a life jacket, a radio transceiver and a single shoe resting on the bow. The wooden door of a small cupboard in side creaked in the strong sea wind, revealing a black flashlight inside.

Red and white lettering in Korean on the boat gave it the apparent name, “Lava.” There was no space for a cabin below decks. Signs posted by Japanese authorities warn the public not to approach the vessel.

“Only an idiot would fish this way,” says Akira Funatsu, a 76-year-old veteran Japanese fisherman.

He notes that there are no refrigerators or freezers on the North Korean boats to properly preserve the catch.

“I guess the government forced them to go to sea,” Funatsu adds.

Some experts argue that the surge in “ghost ships” is tied to new pressure from the North Korean government, which may be prompting fishermen to go dangerous distances to haul in their catch.

“Fish are a vital resource for North Koreans because they are the cheapest source of protein and they can sell it to China for cash,” says Ma Chang-mu a senior researcher at the Korea Maritime Institute in South Korea.

According to the Korea Institute for International Economic Policy, North Korean seafood exports to China surged 88% in the first half of 2017, compared to the same six months in 2016.

“Since Kim Jong Un came to power, there has been increased mention of fish in in the [North Korean] state media,” says Yoon In-ju, another researcher at the Korea Maritime Institute in South Korea.

Another factor may be over-fishing in North Korean coastal areas. Researchers Ma and Yoon say Pyongyang granted fishing rights to Chinese companies years ago, leading to depleted fish stocks in nearby waters.

The Japanese Coast Guard says it has seen a surge of North Korean boats fishing in the Yamato Shallows, a prime fishing ground located partly within Japan’s Exclusive Economic Zone, roughly a 24-hour journey by sea from Japanese land.

As a result of alleged poaching by North Korean fisherman, the Japanese Coast Guard increased its patrols of the area.

An official with the Coast Guard, speaking to CNN on condition of anonymity, said Coast Guard ships warned off around 1,900 North Korean boats in the last five months.

In around 300 cases, Coast Guard vessels blasted North Korean trawlers with water cannons to force them out of the area.

Aboard the North Korean vessels that have drifted towards shore, Japanese authorities have found at least 42 crew members alive — usually fishermen who ask to be repatriated to North Korea.

On November 28, Coast Guard vessels encountered a North Korean boat with ten crew members on board drifting off the Japanese coast.

A police official from Japan’s Hokkaido prefecture said the 10 sailors were suspected of having looted a fishing station from an uninhabited Japanese island close to Hokkaido.

The official spoke to CNN — according to protocol — on condition of anonymity. The official says the boat in question had a sign identifying it as part of the “Korean People’s Army 854 Military Corps.”

Eventually, authorities arrested three members of the crew. Journalists filmed police and Coast Guard officers that day wrestling the men off the vessel and on to dry land.

The police official says six other members of the crew are in custody at Japanese immigration. One of the crew members is currently hospitalized for an unidentified illness.

The surge in North Korean wrecks drifting on to Japanese beaches has raised concerns and fears among some members of the Japanese public during a time of increased regional tension and frequent North Korean missile tests.

But on a practical level, the boats present a financial challenge for small Japanese communities like the Oga Peninsula, which has an aging population of 28,452.

Local officials say they are hard-pressed to come up with the funds to dispose of the five North Korean boats that washed up here this year.

“It is a heavy burden for us to spend so much money for unexpected incidents that have no relation to the daily lives of our residents,” says Fumioki Ito, who directs the citizens welfare department in Oga’s municipal government.

He estimates it may cost more than one million yen, the equivalent of around $8,000, to remove boats that washed up on hard-to-reach rocky shores.

“I really hope that that the national government can help us,” he says.

As for the dead North Korean fishermen, Ito says, “I have nothing but pity for them.”

Maritime experts speculate that for every North Korean boat that reaches dry land in Japan, there may be many more still lost and drifting at sea and the death toll among North Korean fishermen may in fact be much higher.

Something must be terribly wrong in North Korea, to make a fisherman’s catch one worth dying for.