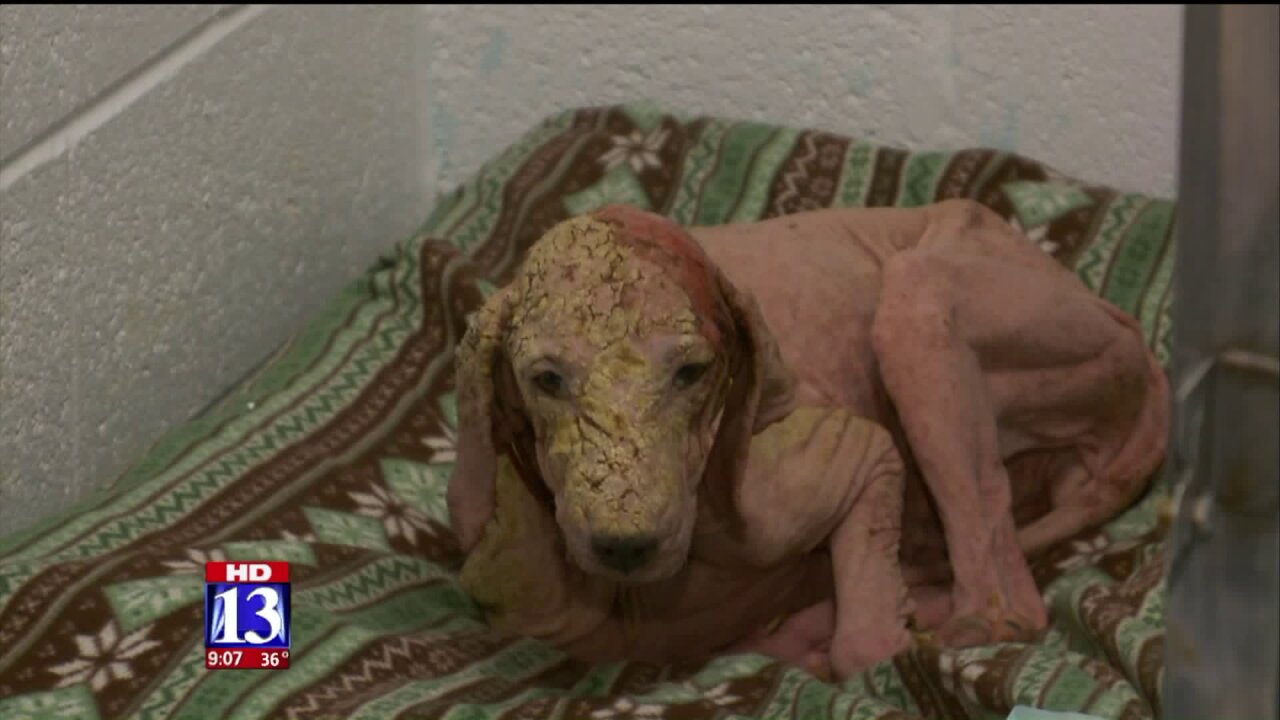 SANDY, Utah - A Sandy man is recounting his mysterious discovery in the middle of Utah's West Desert while off-roading near the Salt Flats on Sunday evening.

Now, a local rescue group is calling it a miracle story of survival.

Matt Bentley said he headed out to Knolls with his dog Bella Sunday, as an early celebration for his best four-legged friend turning three years old.

“Just going 4-wheeling, it’s actually my dog’s birthday [Tuesday], so I wanted kind of wanted to take [Bella] to a new spot,” he explained.

While driving around the popular off-roading area, he spotted something running in the distance and said he realized it was a dog.

He jumped out of his Jeep, and said the pup came to him when he called her. Bentley put her in his Jeep and eventually took a video of the clearly lost dog.

"Middle of nowhere on the salt flats, probably been out there forever,” Bentley says in the video.

He said when he turned on the light, he started to see the severity of the dog’s deteriorating condition.

“That’s when I kind of realized, it had sunk in how bad of shape it was in,” he said.

The dog needed serious help, so he took the pup to a vet and from there was able to get in touch with the Utah Animal Adoption Center (UAAC).

“I have never seen a dog in that bad of a shape,” said Lila Oulson, the UAAC shelter manager.

She took the mysterious lost dog in, and said the pup is suffering from a severe case of sarcoptic mange as well as malnourishment.

“She’s scabbed over, she has sores on her, and then she has no fur,” Oulson said.

Oulson can’t even tell the breed of the dog, but said she appears to be older in age and has signs of bearing puppies.

The dog had been out wandering the desert and salt flats for at least three months, if not more, Oulson guessed.

Bentley rescued her just in time.

“I don’t think she would have survived another week or two out there,” Oulson said.

Despite the rough few months this dog’s had surviving the elements in such terrible condition, Oulson indicated the dog’s personality and spirit have stayed in good shape.

“She’s just being so sweet,” Oulson said. “She wants to be around people.”

Oulson has even already given this miracle dog a name: Kelly. Oulson said it means ‘warrior.’

“She’s going to be a fighter, she’s got to fight this,” Oulson said.

Kelly has started eating food and Oulson said the vet has administered medicine. She expects Kelly to make a full recovery, but Oulson said it’ll take at least a month.

Anyone wanting to contribute to Kelly’s recovery can click here to fill out a form and Oulson said they need to specify in the comment section that it’s a donation for Kelly.

UAAC scanned Kelly for a microchip, but Oulson said the dog doesn't have one.

If they can't track down Kelly's original owners, Oulson said they plan to adopt Kelly out to a new family as soon as she’s healthy.