According to Utah Highway Patrol, a Dodge Ram pickup was traveling northbound on I-215 at a high rate of speed. The driver attempted to take the 4700 South off-ramp, but the car was traveling too fast and the driver lost control.

UHP said that the pickup rolled twice after it hit the sound wall, finally coming to rest on its wheels.

“The driver appears to have been wearing his seat belt improperly and was thrown into the back seat and partially ejected out the rear window,” UHP said. The driver was transferred to the hospital in critical condition.

The ramp was closed for about 90 minutes Monday night, for crash investigators to clear the roadway of debris.

“Troopers want to remind all drivers that the posted speed limit is the safest maximum speed and that properly wearing a seat belt could save your life or prevent serious injury. Properly wearing a seat belt means it should be snugly buckled across the lower hips/upper thighs with the shoulder portion across the sternum and collar bone. Tucking the shoulder belt under an armpit or behind the back is never proper and is unsafe.”

Videos of the crash can be seen below: 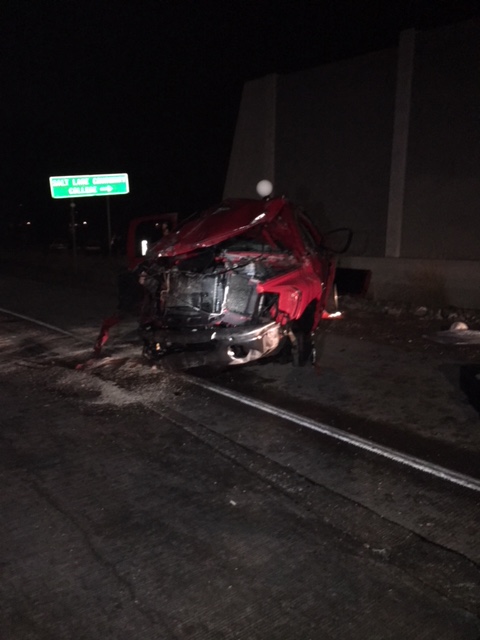