Disney’s Aladdin, Come From Away, Waitress, The Book of Mormon coming to Eccles Theater 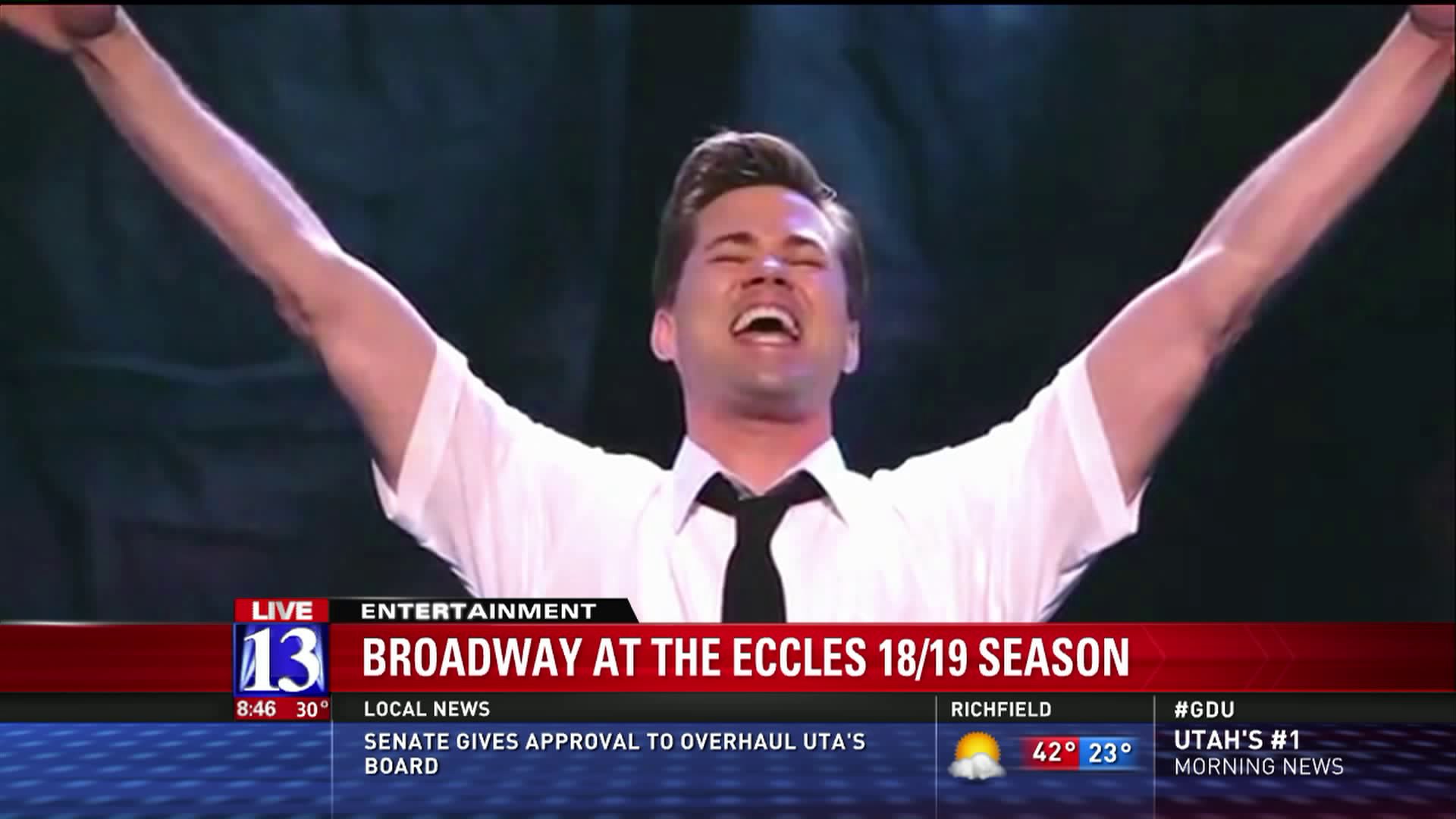 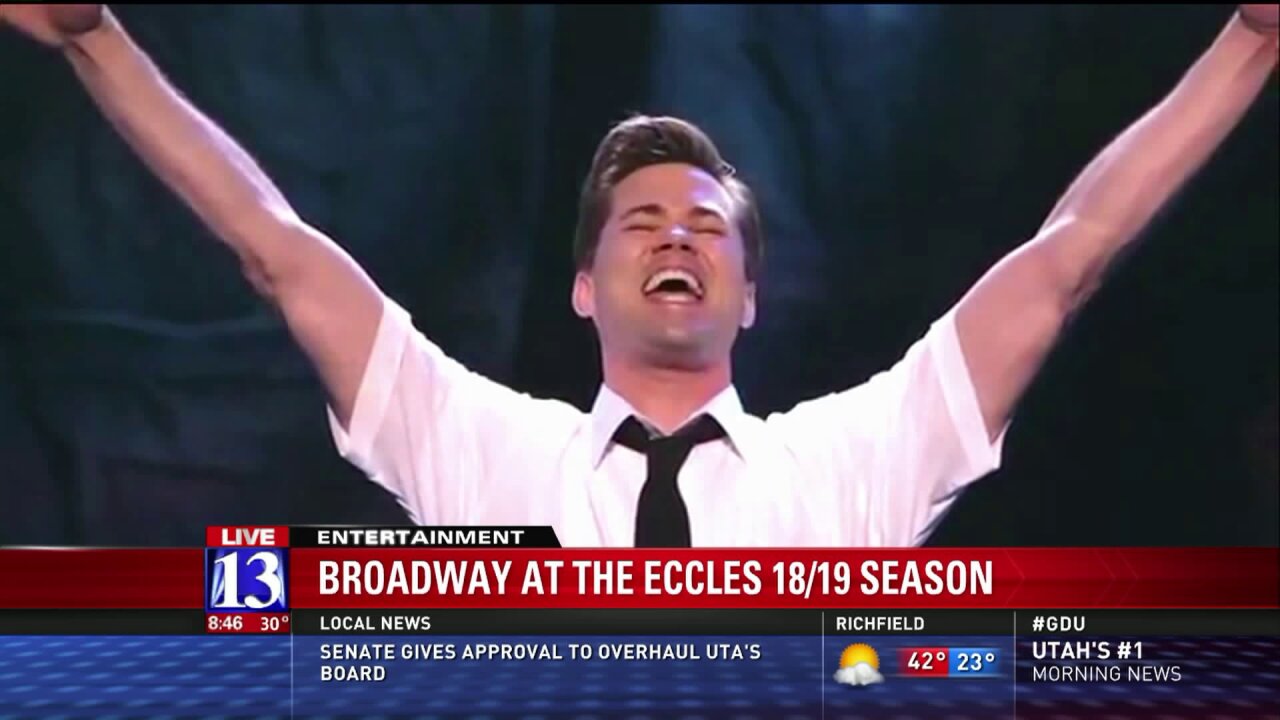 We learned the details of the 2018-2019 Zions Bank Broadway at the Eccles season at the opening night of this week’s sold-out engagement of The Sound of Music.

The six-show season package includes Waitress, Come From Away, Finding Neverland, Disney’s Aladdin, School of Rock – The Musical and the 20th Anniversary Tour of RENT.

The long-awaited return of Wicked will also visit the Eccles Theater during the 2018-2019 season as a special Add-On engagement.

Back by popular demand following record-breaking and sold out engagements in 2015 and 2017, The Book of Mormon also returns as a special add-on engagement.

“Broadway is having a moment,” Bruce Granath said, Broadway Across America VP.  “I cannot remember a time when there were so many wonderful, inventive and popular shows on tour, on Broadway and coming to Broadway. We are thrilled to bring so many of them to the Eccles Theater on this season.”

Broadway at the Eccles is also excited to announce that Dear Evan Hansen, winner of 6 Tony® Awards including Best Musical, will make its Utah debut in the 2019-2020 season.

Subscribers for the 2018-2019 season will have first access to reserve their seats for Dear Evan Hansen when they renew their subscription for the 2019-2020 season.

The dates and performance schedule will be announced at a later date.

“Utah audiences have always embraced Broadway musicals but since the opening of the Eccles Theatre, the demand has been nothing short of extraordinary,” Lauren Reid said, COO of the John Gore Organization. “We are thrilled to bring Utah another unforgettable season of Broadway at The Eccles!”

Patrons can join the Broadway at the Eccles E-Club for updated information about season tickets as well as dates, details and news about the sale of individual tickets:  www.Broadway-at-the-Eccles.com.

Waitress
September 25 – 30, 2018
Inspired by Adrienne Shelly's beloved film, WAITRESS tells the story of Jenna - a waitress and expert pie maker, Jenna dreams of a way out of her small town and loveless marriage. A baking contest in a nearby county and the town's new doctor may offer her a chance at a fresh start, while her fellow waitresses offer their own recipes for happiness. But Jenna must summon the strength and courage to rebuild her own life.

Come From Away
November 6 – 11, 2018
The New York Times Critics’ Pick takes you into the heart of the remarkable true story of 7,000 stranded passengers and the small town in Newfoundland that welcomed them. Cultures clashed, and nerves ran night, but uneasiness turned into trust, music soared into the night, and gratitude turned into enduring friendships. Don’t miss this breathtaking new musical written by TonyÒ nominees Irene Sankoff and David Hein, and helmed but this year’s Tony-winning Best Director, Christopher Ashley.

Finding Neverland
December 4 – 9, 2018
Directed by visionary Tony®-winner Diane Paulus and based on the critically-acclaimed Academy Award® winning film, FINDING NEVERLAND tells the incredible story behind one of the world’s most beloved characters: Peter Pan. Playwright J.M. Barrie struggles to find inspiration until he meets four young brothers and their beautiful widowed mother. Spellbound by the boys’ enchanting make-believe adventures, he sets out to write a play that will astound London theatergoers. With a little bit of pixie dust and a lot of faith, Barrie takes this monumental leap, leaving his old world behind for Neverland, where nothing is impossible and the wonder of childhood lasts forever.

Disney’s Aladdin
April 25 – May 12, 2019
Discover a whole new world at Disney’s ALADDIN; the hit Broadway musical. From the producer of The Lion King comes the timeless story of ALADDIN, a thrilling new production filled with unforgettable beauty, magic, comedy and breathtaking spectacle. It’s an extraordinary theatrical event where one lamp and three wishes make the possibilities infinite. See why audiences and critics agree, ALADDIN is “Exactly What You Wish For!" (NBC-TV).

School of Rock
May 28 – June 2, 2019
SCHOOL OF ROCK is a New York Times Critics’ Pick and “AN INSPIRING JOLT OF ENERGY, JOY AND MAD SKILLZ!” (Entertainment Weekly). Based on the hit film, this hilarious new musical follows Dewey Finn, a wannabe rock star posing as a substitute teacher who turns a class of straight-A students into a guitar-shredding, bass-slapping, mind-blowing rock band. This high-octane smash features 14 new songs from ANDREW LLOYD WEBBER, all the original songs from the movie and musical theater’s first-ever kids rock band playing their instruments live on stage. Vanity Fair raves, “FISTS OF ALL AGES SHALL BE PUMPING!”

RENT 20th Anniversary Tour
June 25 – 30, 2019
In 1996, an original rock musical by a little-known composer opened on Broadway… and forever changed the landscape of American theatre. Two decades later, Jonathan Larson’s RENT continues to speak loudly and defiantly to audiences across generations and all over the world. And now, this Pulitzer Prize and Tony Award®-winning masterpiece returns to the stage in a vibrant 20th anniversary touring production. A re-imagining of Puccini's La Bohème, RENT follows an unforgettable year in the lives of seven artists struggling to follow their dreams without selling out. With its inspiring message of joy and hope in the face of fear, this timeless celebration of friendship and creativity reminds us to measure our lives with the only thing that truly matters—love.

Wicked
January 30 – March 3, 2019
The surprising tale of an unlikely friendship between two women in the Land of Oz, WICKED tells the untold story of the Wicked Witch of the West and Glinda the Good, long before Dorothy drops in. Elphaba, born with emerald-green skin, is smart, fiery and misunderstood. Glinda is beautiful, ambitious and very popular. The remarkable odyssey of how these unexpected friends changed each other’s lives for good has made WICKED one of the world’s most popular musicals.

The Book of Mormon
August 13 – 25, 2019
The New York Times calls it “The best musical of this century!” Jimmy Fallon of The Tonight Show calls it “Genius. Brilliant. Phenomenal.” It’s THE BOOK OF MORMON, the nine-time Tony Award®-winning Best Musical. This outrageous musical comedy follows the misadventures of a mismatched pair of missionaries, sent halfway across the world to spread the good word. Now with standing room only productions in London, on Broadway, and across North America, THE BOOK OF MORMON has truly become an international sensation