EMERY COUNTY, Utah -- A man who broke his leg in a fall spent the night in a slot canyon in Emery County before he was rescued Wednesday morning.

According to the Emery County Sheriff's Office, 26-year-old Brigham Holladay from Nephi was rescued from Ding & Dang Canyons Wednesday morning.

"There was a flash of an unnatural bulge, and I heard a snap," Holladay said, recounting his jump down off of a tough spot in the canyon where he said he broke his leg.

Holladay said he told his parents where he'd gone hiking and when to expect him back. The sheriff's office said his parents called dispatch shortly after midnight, saying they'd last heard from Holladay around 2:30 p.m. Tuesday and he didn't return.

Unable to continue hiking on his broken leg, Holladay said he found a rock to sit on and he listened to pod casts while waiting for rescuers to find him.

"Just kind of sat there and did my best to keep myself warm," he said.

Searchers found Holladay's vehicle at the trail head just after 2 a.m. Wednesday. Personnel from the sheriff's department, Goblin Valley State Park and Green River Ambulance all responded along with a Utah Department of Public Safety helicopter.

They faced quite a challenge to reach Holladay.

"That was the biggest thing—The narrowness of the canyon, the steepness of those jumps that we had to take down," said Emery County SAR member Brett Guymon. He said they had to wade through waist-deep water with sheer cliffs on either side, and all in the pitch black.

Just before daylight, Guymon said they found Holladay about two miles from the trail head. He said a Goblin Valley State Park ranger made it to Holladay first.

Holladay said he could hear the park ranger calling his name, the ranger's voice echoing off the canyon walls. Holladay responded back to let him know he was there.

"He came up and had a pack full of warm jackets and food and stuff, so that was a relief," Holladay said.

When the SAR team reached Holladay, Guymon said they had to carry Holladay on a backboard back through the narrow canyon to a spot wide and flat enough for a helicopter to hoist him out.

"We had to keep him above our heads, otherwise the slot canyon is narrow enough that the backboard doesn't fit through," he explained.

After the helicopter lifted Holladay out, he was taken to a hospital where he said he found out he broke his fibula. He said the doctor told him it should heal quickly.

When all was said and done, Emery County said it took about 9 hours to find and rescue Holladay.

"Another successful rescue in Emery County," Emery County Sheriff Greg Funk said in a press release, "Thanks to these highly skilled, selfless responders and multiple agencies working together.” 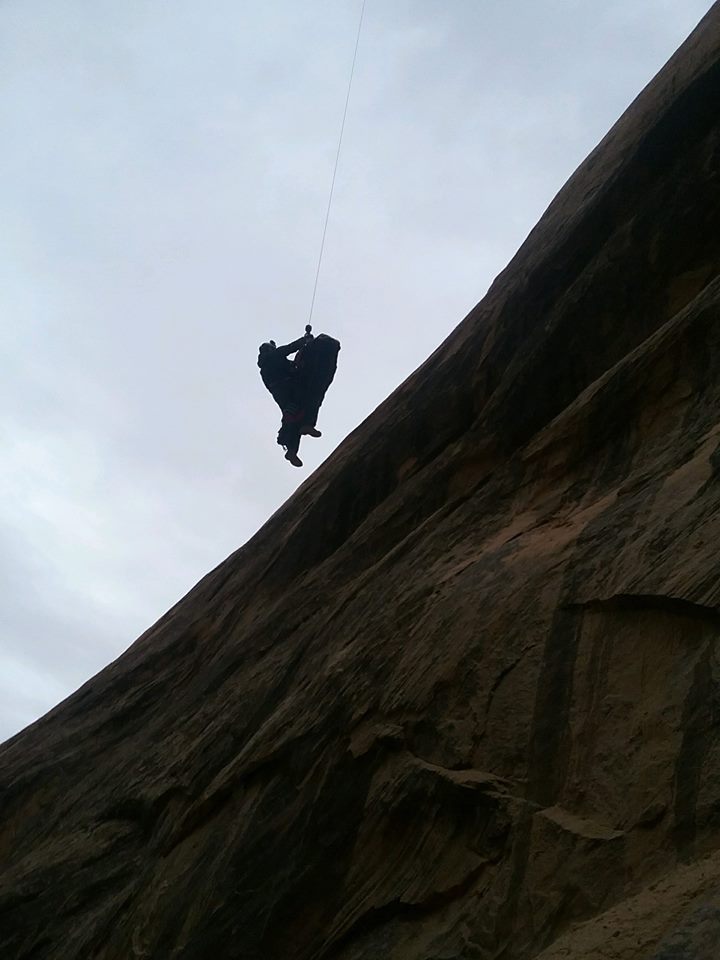