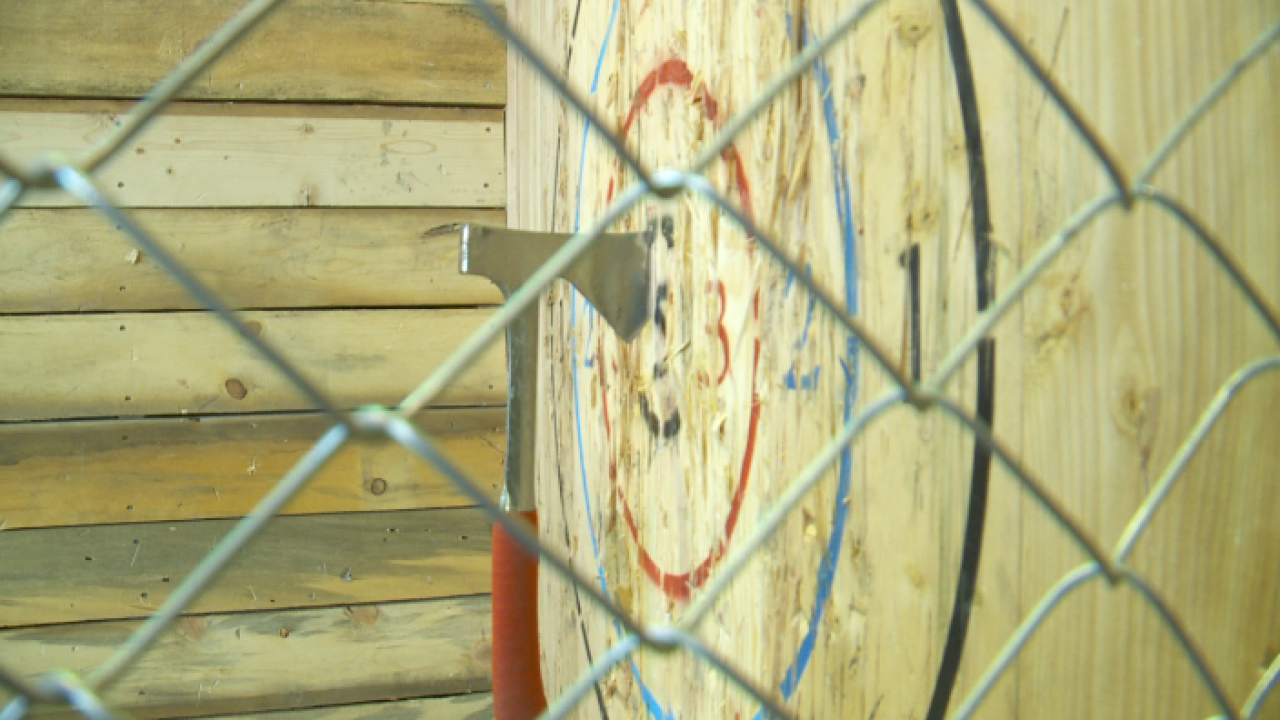 A hatchet buried in a target at Social Axe Throwing in Salt Lake City. (Image by Mike Rank, FOX 13 News)

Social Axe Throwing, which offers a place for people to hurl axes at a target inside caged lanes, sought a beer license for its customers at its Salt Lake City location. In order to approve it, the Utah Department of Alcoholic Beverage Control Commission was asked to amend the definition of "recreation" under state liquor laws to include "axe throwing" alongside things like bowling, billiards and tennis.

The trend began in Canada and has spread to the United States, said Mark Floyd, one of the owners of Social Axe Throwing. Some axe throwing businesses have liquor licenses in other states. This is the first one in Utah.

"It’s just a ton of fun! It gets people out of their comfort zone doing something that they don’t know how to do. As soon as they do it, it’s game on! Everybody has a good time," Floyd told FOX 13 on Tuesday.

But commissioners made it clear they had significant concerns about the concept of "alcohol and axes."

Floyd explained how the setup was similar to bowling in that there were lanes. There is an employee watching over people as they throw axes at the target and the axes themselves are holstered. People with open-toed shoes were not allowed in the lanes. Minors on the premises would have to wear wristbands to ensure they didn't grab a can of beer.

"The axe, of course, by and of itself, you mention something that’s got a sharp edge alarms everybody and I think we want to make sure we satisfy the citizens of this state there’s something in place to protect people who go to this place," DABC Commissioner Tom Jacobson said.

Commissioner Kathleen McConkie-Collinwood asked if there was any research on the effects of alcohol and axe throwing (staff members said no, only news accounts about the trend). Jacobson agreed to allow Social Axe Throwing to have a beer license -- with a promise to return in six months to ensure there are no problems.

"We don't want misuse of an axe that is somehow related to alcohol," Jacobson said.

The DABC Commission voted 5-1 to approve the license, with McConkie-Collinwood being the only nay vote.

"You can get a cold beer at a bowling alley, you can have a game of bowling. It’s the same concept," said Floyd. "We’re not here to open a tavern or a pub, we’re here to give you one more reason to come down and throw an axe and have a good time."