Police: Tesla driver says autopilot was on during accident

SOUTH JORDAN, Utah - The driver of a Tesla Model S told police she was using the car's autopilot feature and was looking at her phone when she crashed into a fire truck at 60 miles an hour.

According to South Jordan Police, the Tesla was traveling southbound on Bangerter Highway (SR-154) Friday around 6:30 p.m. before it crashed into the truck that had been stopped at the red light at 10400 South.

Police said that after being interviewed, the 28-year-old driver from Lehi, Utah, said that she was using the car's autopilot feature at the time the accident occurred, but looking down at her phone.

"She was comparing the address with a second, faster route on her phone and was looking at her phone," Sergeant Samuel Winkler said. He continued that she, "Looked up shortly before the accident, and was unable to do anything."

He indicated that even when the car is in autopilot mode, the driver still needs to pay attention and intervene when necessary.

"These are still semi-autonomous vehicles, so that means the driver is still required to have input into the vehicle," Sgt. Winkler said. "They need to be aware all the time of what's going on around them."

Patrick Wiggins, a Tesla enthusiast who owns two of the battery-powered cars of his own, echoed that autopilot does not mean the car is fully autonomous.

"You never know when something might really quickly pull out in front of you, and the car can't react to that," he explained. Wiggins also said Teslas can't detect red lights or stop signs, so it's up to the driver to stop the car.

Wiggins said he uses autopilot everywhere he drives, and he explained data shows it is safer to drive that way.

"The accident rate has gone down significantly with autopilot-engaged cars," he said. Still, even if his hands are off the wheel and his foot off the pedal, his eyes are still on the road.

The driver in Friday's crash was transported to a nearby hospital with a broken ankle. Police say the driver of the UFA truck was not injured and left later in the same truck.

Winkler said Tesla sent out a team to gather and review data stored in the vehicle.

Elon Musk, the CEO and product architect at Tesla Inc, released two tweets about the accident:

What’s actually amazing about this accident is that a Model S hit a fire truck at 60mph and the driver only broke an ankle. An impact at that speed usually results in severe injury or death.

The police department released a reminder to drivers of semi-autonomous vehicles:

"As a reminder for drivers of semi-autonomous vehicles, it is the driver’s responsibility to stay alert, drive safely, and be in control of the vehicle at all times. Tesla makes it clear that drivers should always watch the road in front of them and be prepared to take corrective actions. Failure to do so can result in serious injury or death.  Check with the vehicle’s owner manual to determine if this technology can be used on city streets or not." 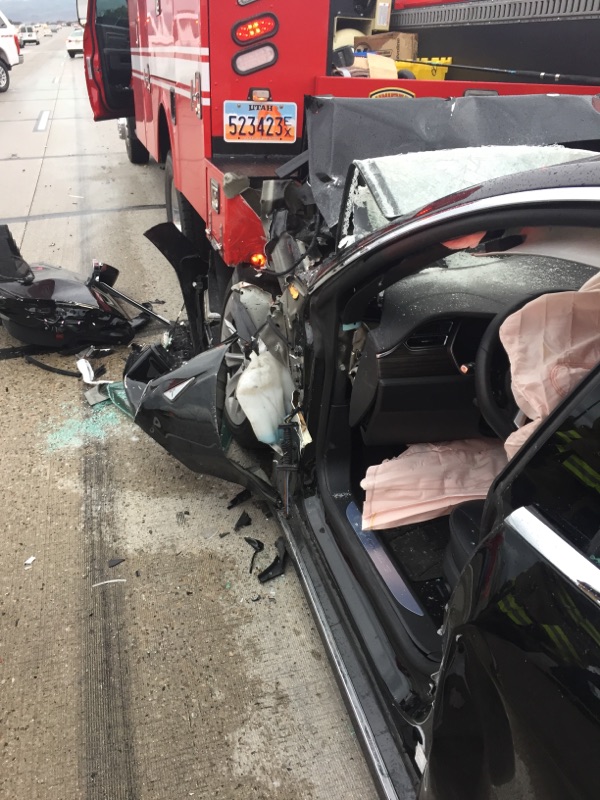