What not to do if you’re valet parking a Porsche 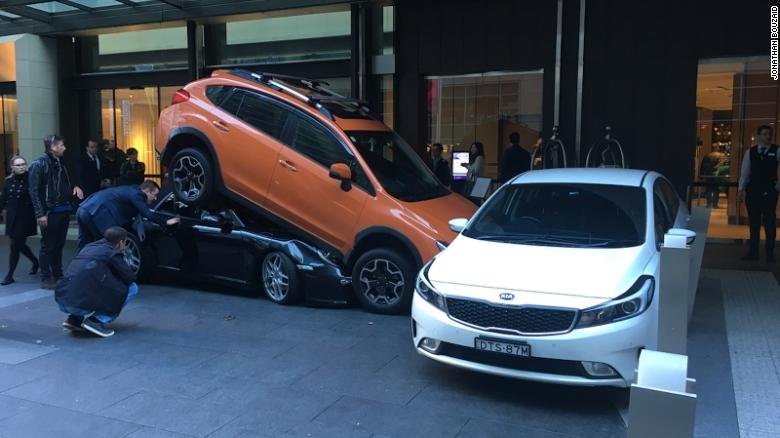 If you think you had a tough morning at work, spare a thought for this hotel valet in Sydney.

Tasked with parking a Porsche Carrera for a hotel guest, he managed to wedge it under the SUV parked in front, and ram a second parked car against a row of metal bollards.

“I saw the valet hit the car in front from a parked position,” said Jonathan Bouzaid, who watched events unfold and posted photos to Instagram.

“He then must have panicked and hit the accelerator causing the Porsche to go further under the orange car and pushing the white car into the bollards,” Bouzaid said.

“I think the valet wasn’t aware of the power that you get when starting a Porsche,” he added. The luxurious Porsche Carrera can accelerate from 0 to 100km/h in less than five seconds, according to the company’s website.

The valet had to be cut free from the wreckage but wasn’t hurt and was sent home to rest, said Camilla Cooper, a spokeswoman from the Hyatt Regency hotel in central Sydney.

She said the accident happened just after 8 a.m. local time, and damaged of all three vehicles involved.

The incident’s being investigated, and the hotel is working with the owner of the car to settle insurance.