The council is set to meet next week to make additional decisions regarding the project.

HERRIMAN, Utah -- There is a grassroots movement to stop the planned Olympia development in the southwest part of Salt Lake County. 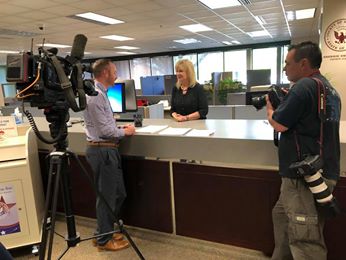 “We’re not trying to block development, we’re not opposed to development,” Swain said. “It more or less allows for about 35 people per acre, which is three times the most densely populated area in Salt Lake.”

Swain gathered more than 10,000 signatures, to show the council how many people are upset by the ordinance. According to Salt Lake County Clerk Sherrie Swensen, that’s not even a fraction of the amount of signatures Swain would have to gather to get rid of the ordinance.

“The signature quota is based on the number of votes cast in the presidential election in 2016 and that was over 423,000,” Swensen said. “They have to obtain 20 percent of that number; that’s nearly 85,000 signatures.”

Swain has forty-five days to collect these signatures to make it on November's ballots—something Swensen said isn’t impossible.

“It’s a huge number,” said Swensen, “but if they’re enthused and they get a lot of help, it could be done.”

The Salt Lake County Council approved a zone change on 932 acres near Herriman to clear the way for a development similar to the "Daybreak" master-planned community in South Jordan.

The Olympia project calls for 8,765 high-density residential units as well as businesses, hotels and restaurants.

The council approved the zoning change despite major concerns about traffic and infrastructure from the leaders of every nearby city and town.

Salt Lake County Mayor, Ben McAdams later said the county will act as a mediator and try to strike a balance between residents' concerns and the right of private property owners to sell or develop their land.

Swain said he would rather talk with Mayor Ben McAdams and find a solution rather than use a referendum.

“At this point, we’re just kind of sitting back, allowing for Mayor McAdams to talk with some of the other mayor’s in the local cities,” Swain said. “I believe there’s going to be another meeting set up for other people to voice their concerns and work on a solution.”