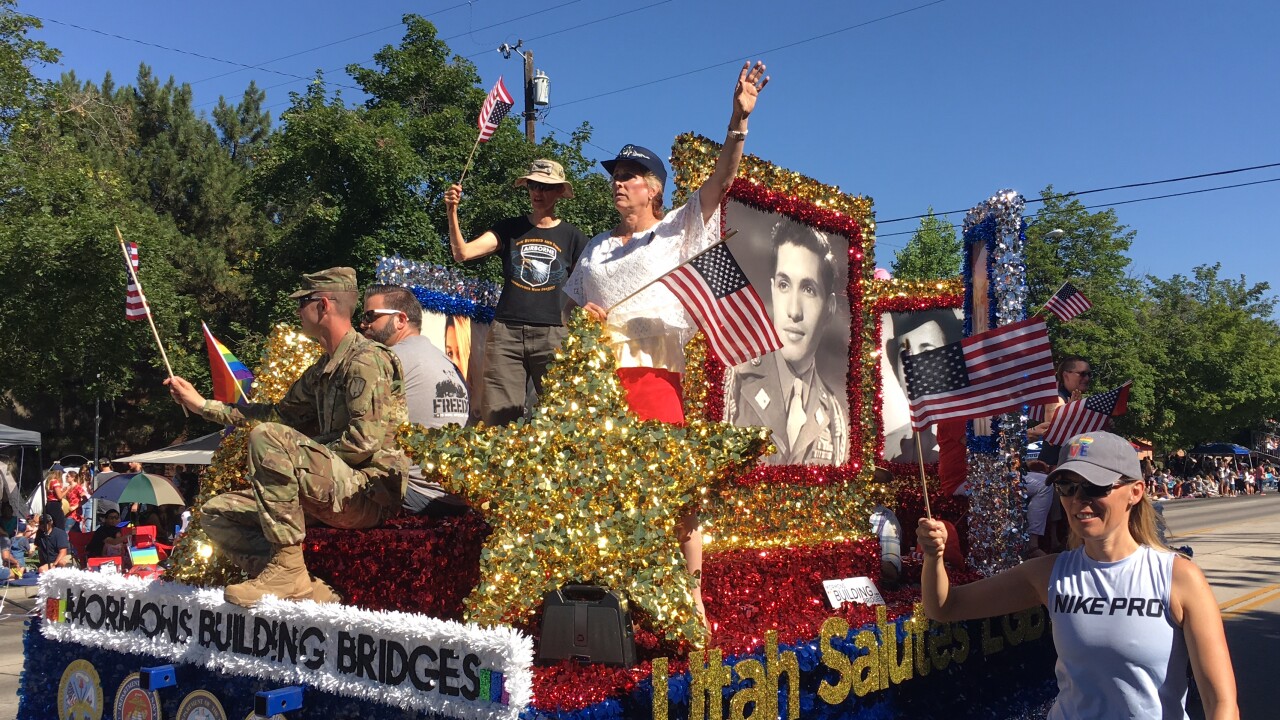 After years of being rejected from one of America's largest patriotic celebrations in one of Utah's most conservative cities, several LGBT community groups were finally allowed in the Freedom Festival parade.

"This is about America, all the people here, the community," said Sgt. Jeff Clement, a Utah Army National Guard veteran who rode a float highlighting LGBT veterans put together by Mormons Building Bridges. "I get to be a part of it."

After years of being rejected from the parade, the groups were finally allowed in after Utah County Commissioners and Provo Mayor Michelle Kaufusi inked contracts with America's Freedom Festival that included non-discrimination clauses. The festival's exclusion of those groups put taxpayer dollars for the parade and festival at risk. It led to back-and-forth battles over whether the LGBT groups really would be allowed in the parade.

"We're here, we're marching!" said Brianna Cluck with Provo Pride, which pushed to be in the grand parade alongside the floats before a crowd of about 250,000.

Provo Pride and Provo PFLAG marched with a 40-foot quilt made with squares from different families across Utah Valley -- gay families, lesbian families, the parents of transgender children, straight couples and single parents.

Members of Provo Pride and Provo PFLAG march with a quilt banner at the Freedom Festival Parade. (Photo by Ben Winslow, FOX 13 News)

"It really just means a lot, especially to the kids," said Cluck. "When I was in high school, if I could have seen a parade entry like this, where it's these groups working together to say, 'We love you and we want you. You're here and part of my family,' that would have changed a lot growing up."

There were no jeers, but the applause was a little more tepid than other groups received. Still, they had supporters. Some lined the parade route waving rainbow flags and giving high-fives. Provo Pride and Provo PFLAG got louder cheers when they engaged in the traditional "spin the banner" for the crowd. In this case, they spun their quilt around as they marched.

The director of the Freedom Festival told FOX 13 he was pleased with how the float and other entries turned out.

"We're very pleased," Paul Warner said. "We think they were well received along the parade route, too."

After all the controversy, the groups said they do plan to return next year. Even Warner said he welcomed them back.

A member of the Provo Pride group blows a kiss to the crowd watching the Freedom Festival parade. (Photo by Ben Winslow, FOX 13 News)

"That's the plan, yep," he told FOX 13. "What we do is, we'll have an application process every year and I think now that they know what we want, clearly when they make their application it will reflect the Fourth of July, America and the red, white and blue of the American flag."

Mayor Kaufusi said she wanted to see the groups back in next year's parade. She urged both sides to negotiate to ensure entries fit the theme of the event and to get the LGBT groups in.

"Everyone's coming together to celebrate really what it's all about," she said. "Freedom of speech is one of them."