Fraudsters scam 90-year-old man out of thousands of dollars

MILLCREEK - Police now seek public's help in identifying a man who scammed a 90-year-old out of thousands of dollars.

When Evelyn's Stallings 90-year-old father had an unexpected knock on his door this week, he never guessed the man on the other side would scam him out of thousands.

"We were fooled," Stallings said. "We didn't think this could ever happen."

Stallings said her father was home alone when a man and his two friends came to his door on Monday. They claimed to be roof repairers. They offered to fix Stalling's roof and got to work, even though no repairs were needed.

"He thinks it's done, and they've fixed whatever was wrong," Stallings said of her father.

However, when it came time to pay for the fake repairs, her father didn't have enough money.

"He let him drive him to the bank," Stallings said of her father who is battling memory loss.

One man watched as her father made a withdrawal. "$3,000 is a good chunk of money," she added of the money the men had her father take out of his account.

The surveillance cameras in Zions Bank got a clear picture of one of the suspects, he's seen wearing a maroon shirt. Police hope viewers can help identify them.

"They shouldn't be able to get away with that. What goes around comes around." 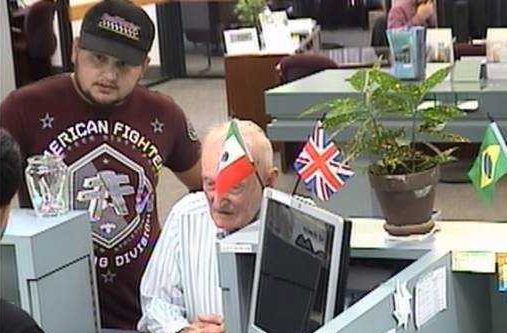