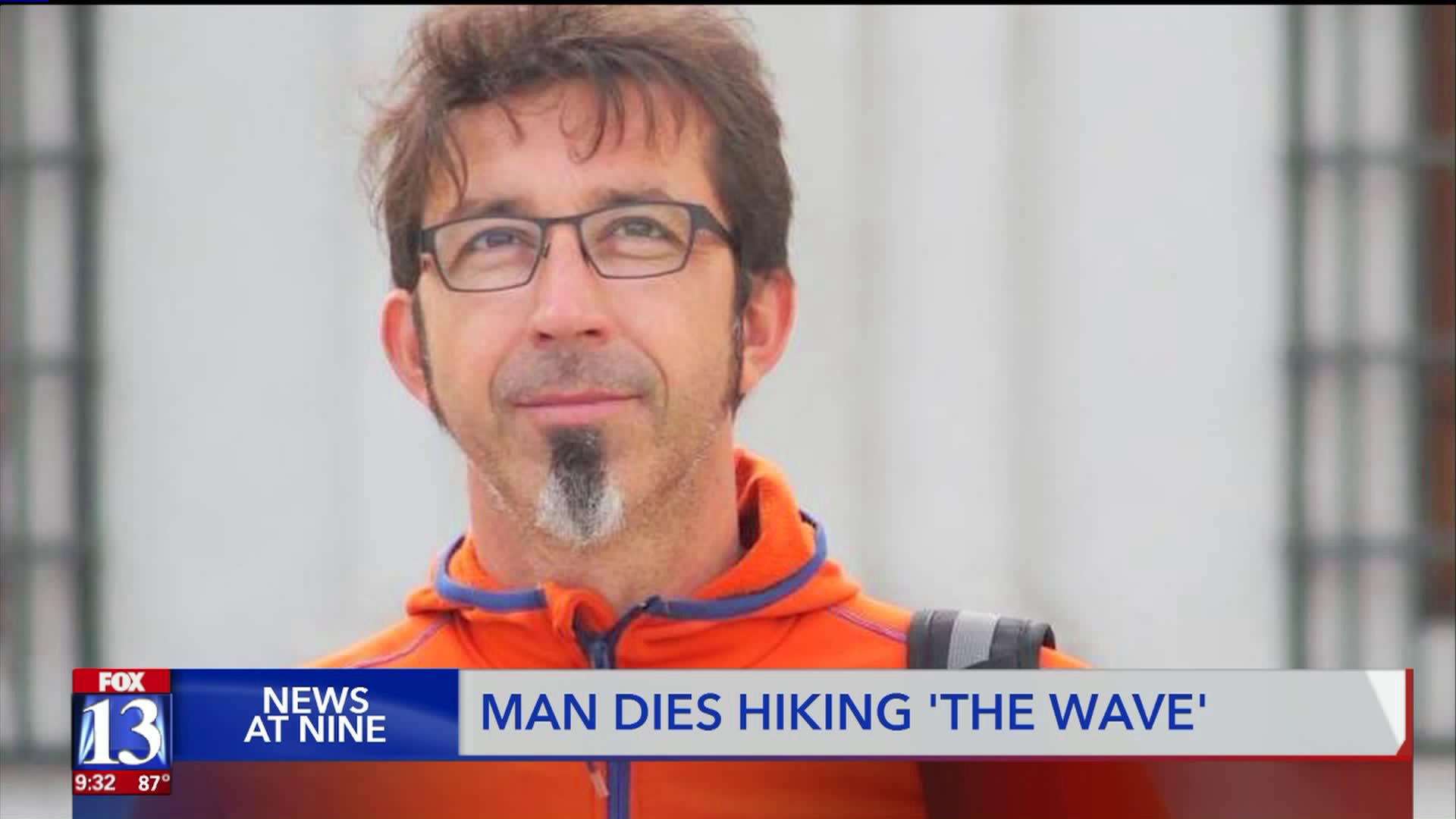 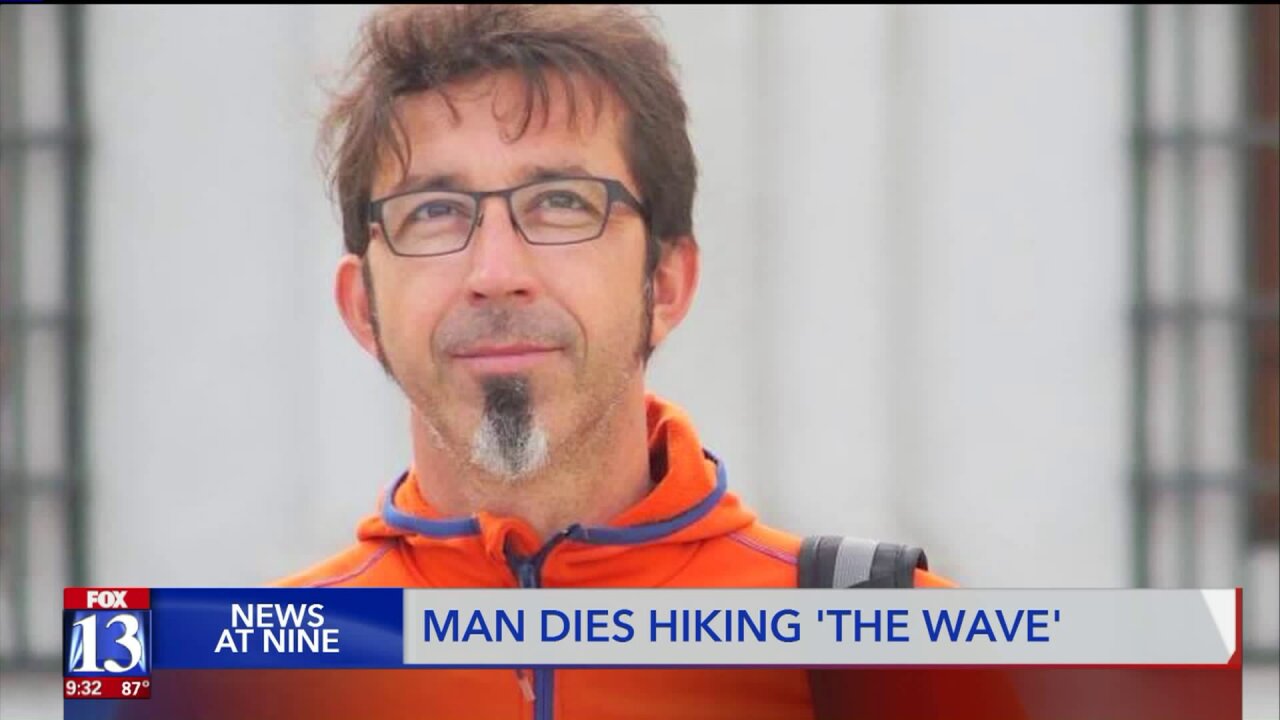 KANE COUNTY, Utah - A hiker died of apparent heat-related symptoms after he went missing in Kane County Monday while hiking with his son. One couple who said they saw the victim at the BLM office beforehand expressed concerns that a last-minute permit issued by the BLM may have forced the man to start the hike too late in the day.

According to a press release sent by the Kane County Sheriff's Office, deputies received a call at approximately 7:05 p.m. Monday from a woman in a Kanab hotel who said her partner got lost while hiking near "The Wave" area of Kane County.

The caller told deputies that 49-year-old Christophe Pochic of Belgium and her 16-year-old son had hiked to The Wave Monday. The woman said that her son called her to say he had become separated from Pochic during the hike when Pochic became disoriented, and the son had searched for three hours along with other hikers but couldn't find Pochic.

Two hours later, Bureau of Land Management personnel found Pochic's body, and the press release said the investigation led authorities to believe the death was heat related. It stated that temperatures have been extremely hot, and the slick rock areas of The Wave are known to produce extreme, deadly heat. The release advised hikers to leave early and finish early.

The Wave is an iconic sight, drawing visitors from all over the world. The Bureau of Land Management runs a lottery system to issue a certain number of permits per day.

On Monday morning, Rich and Michelle Crawford said they arrived at the BLM office in Kanab in hopes of winning one of the 10 walk-in permits that are issued each day.

"When you do the walk in [permit], it's for the next day," Michelle Crawford explained. She said many people who showed up to the lottery drawing Monday morning had just woken up, in hopes of getting the permit then spending the day to prepare for the hike.

After handing out the permits for the next day, she and Rich said BLM staff did a special drawing for two more permits that had to be used right away.

"They just said, 'This is rare,'" Michelle recounted. She said the staff told them, "'We have two permits that were given back or not used for the same day, and whoever gets these two for the same day has to go-- and you can't use them for the next day.'"

They said a man they later found out was Pochic, ended up winning the lottery drawing. He was with his son, and Michelle said he wanted to make a call first before deciding to take the permit, but was put on the spot.

"He had to decide in that moment, with everyone waiting, whether or not he was going to go," she said. She said the man made the split-second decision to go, likely because hiking The Wave is a once-in-a-lifetime opportunity.

"Everyone wants it," she said. "It's a unique opportunity, and I think he was just trying to hope for the best."

After the drawing, the couple explained that the BLM hosted an orientation to prepare hikers for the strenuous trip, by explaining the trail and how best to pack for the hike. They said the trail isn't clearly marked, and it's easy in a few spots to get lost.

They said during this time of year, anyone hiking the trail should leave early in the morning and pack at least a gallon of water per person as well as enough snacks and supplies.

By this time, it was nearing the middle of the morning and Pochic and his son would have had an-hour-and-a-half drive to the trailhead, they said.

"He actually got up before the session ended and said, 'I really have to go. I have a really hot hike ahead of me,'" Rich recounted.

The next day, the couple learned while sitting in The Wave that someone had died while hiking the trail. They said they immediately thought of Pochic and his son. The couple said the BLM was great at making sure everyone was prepared for the rigorous hike, but that the BLM put the hiker and his son in an extenuating circumstance by issuing the permit late in the morning and expecting him to go in the middle of the day.

"I don't really think it's responsible to let anyone leave, knowing they're going to go on that hike, at that time of day," Rich said. "It's just a bad idea all around."

The Bureau of Land Management said Tuesday evening that they can't comment on ongoing investigations.

Pochic's body was transferred to the Utah Medical Examiner's Office in Salt Lake City for further investigation into the cause of his death.